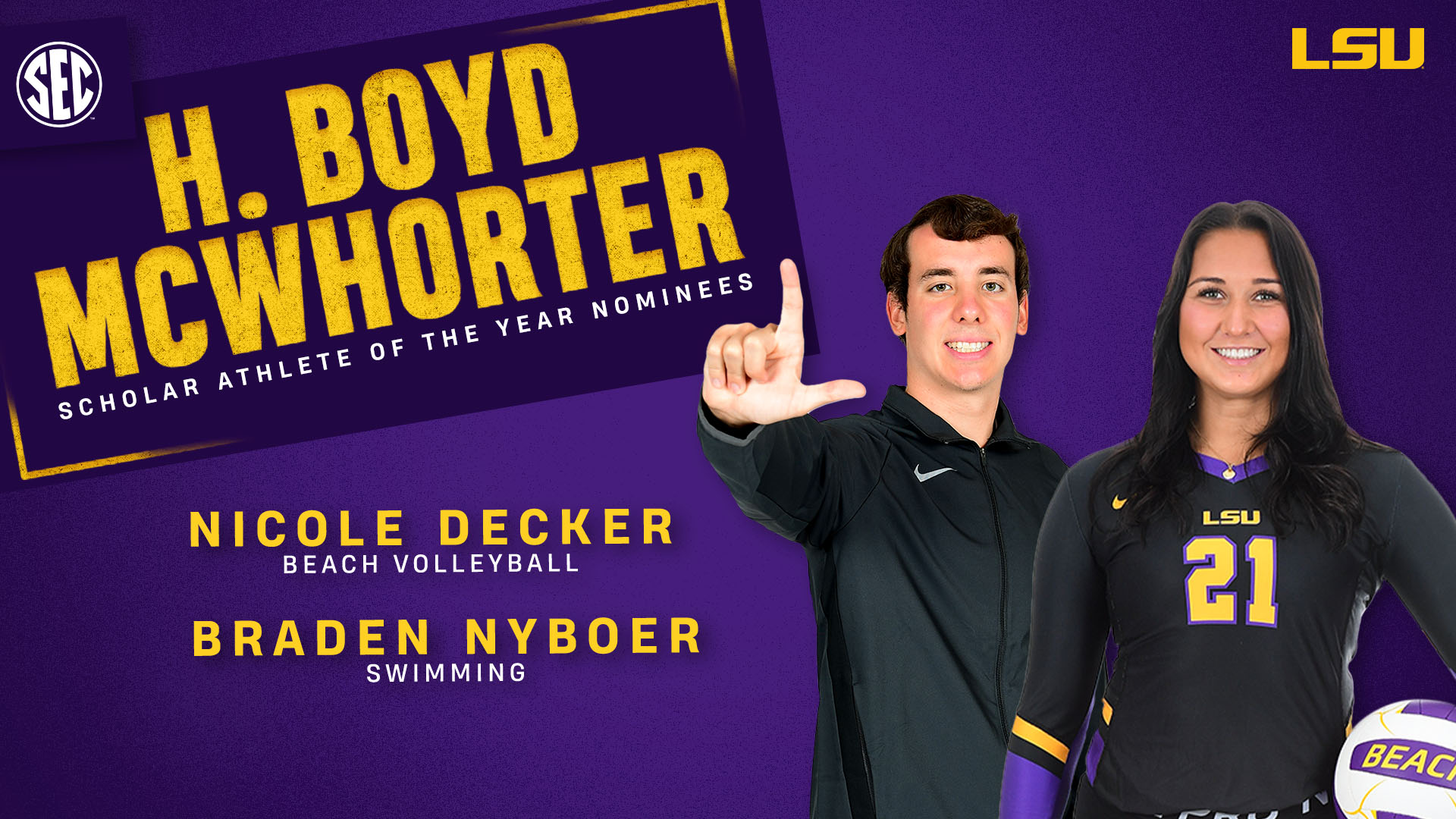 Birmingham Ala. – Nicole Decker of beach volleyball and Braden Nyboer of swimming and diving were named LSU’s nominees for the H. Boyd McWhorter Scholar-Athlete Post-Graduate Scholarship announced Tuesday by the Southeastern Conference.

The Southeastern Conference will name the 2021 recipients of the H. Boyd McWhorter Scholar-Athlete Post-Graduate Scholarship in late May.

Decker played both beach and indoor volleyball for LSU throughout her time in Baton Rouge. After playing indoor throughout her freshman fall, Decker decided to focus solely on beach volleyball for the remainder of her career. In the sand, she was 5-0 while also contributing to the team’s success in the classroom.

The Coral Springs, Florida native has carried a 4.06 GPA throughout her time at LSU as a finance major. A leader in the classroom, Decker has helped the beach volleyball team earn the Tiger Cup the past two year which is awarded to the LSU team that has the most success in the areas of competitive success, academic accomplishment and community service participation.

In 2019, Decker was named one of LSU’s Wally Pontiff Award recipients which is given to student-athletes with at least 54 credit hours that carry a 3.90 GPA or higher. She has been named on numerous other academic achievement lists such as the SEC Honor Roll four times, the President’s Honor Roll twice and as the LSU Student-Athlete of the Month for June 2017.

As a finance major in LSU’s E.J. Ourso College of Business, Decker was selected as one of just three students out of a large pool of candidates from the college to intern with Varadero Capital, a hedge fund in New York City, when she was a sophomore.

“We are proud of Nicole,” said LSU Beach Volleyball Head Coach Russell Brock. “She genuinely has brought joy to our team and committed herself to working hard every day in the sand. In the classroom, she proved that she was the elite of the elite. I’m so impressed by her ability to juggle the demands of being a successful student and the rigors of being an athlete.”

Nyboer was a solid force in the pool for the Tigers throughout his time wearing the purple and gold. Over four years in the pool, he notched three career victories and 24 top-ten finishes, helping the Tigers knock off many opponents in dual meet competition. Two of his three wins came back in 2019 when he won the 500-Yard Freestyle against Texas A&M and the 1650-Yard Freestyle against Incarnate Word and Delta State. His third career win came this past season, 2020-21, against Texas A&M in the 500-Yard Freestyle.

Outside of the pool, Nyboer left his mark as well. A biochemistry major with a business minor, he has garnered many academic achievements throughout his time at LSU. He is a four-time member of the SEC Academic Honor Roll, a two-time Dean’s list member, and a member of the 2020 President’s Honor Roll. Like Decker, he was also a recipient of the Wally Pontiff Award.

“Braden, throughout his four years at LSU, embodied the term student-athlete,” said LSU head swim coach Dave Geyer. “This nomination is a testimony of his commitment to the classroom and the water.”

The award recipients are chosen by a committee of Faculty Athletics Representatives from the 14 SEC institutions and are announced in May.