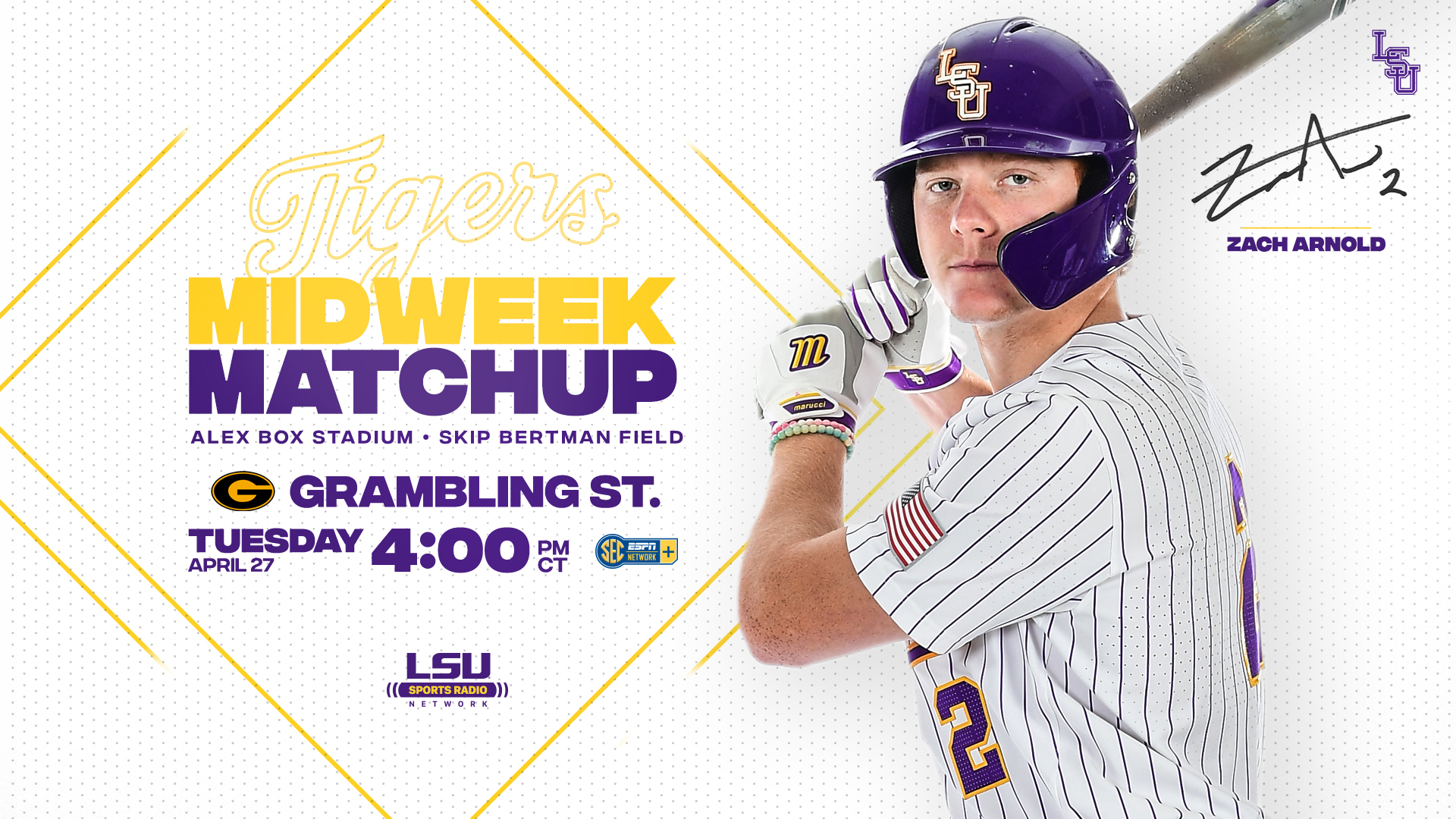 SERIES RECORD VS. GRAMBLING STATE
LSU leads the all-time series with Grambling, 9-0, and the first meeting between the schools occurred in 2009. All nine of the prior meetings have been played in Baton Rouge. LSU defeated GSU, 9-0, in the teams’ most recent meeting on April 2, 2019, in Alex Box Stadium, Skip Bertman Field.

QUOTING PAUL MAINIERI
“Our RPI is No. 22 right now against the most difficult schedule in the country. We’re really not that far away if we can get the job done in this last four-week stretch. We’re going to stay positive, we just won a series on the road against a Top 10 team (Ole Miss). That’s one of the more difficult places in the country to play, and we earned two terrific wins. So now we have to move forward and keep plugging away. We’re going to have to swing the bats against this Grambling team; they’re very capable of putting up some offensive numbers. We will need to be focused to have success against them.”

ABOUT LSU
•    LSU has a No. 22 RPI in Monday’s updated official NCAA rankings, up five spots from its No. 27 ranking a week ago … the Tigers are currently ranked No. 1 in strength of schedule, having played the most difficult schedule in the nation through the first 10 weeks of the season
•    LSU is No. 3 in the nation (tied with Auburn) in home runs with 55 dingers this season … Arkansas is No. 1 in homers with 72, and Old Dominion is No. 2 with 62
•    The Tigers posted a series win at No. 9 Ole Miss last weekend, batting .319 (37-for-116) in the three-game set … the Tigers outhit Ole Miss, 37-33, and LSU outscored the Rebels, 21-16
•    Freshman first baseman Tre’ Morgan helped lead the Tigers to three wins in four games last week, including an SEC series victory at ninth-ranked Ole Miss … Morgan, the Tigers’ lead-off hitter,  batted .500 (9-for-18) in four games with one double, three RBI, five runs scored, one steal and a .550 on-base percentage … in LSU’s series win at Ole Miss, Morgan hit .571 (8-for-14) with three RBI, four runs scored, one stolen base and a .625 on-base percentage … Morgan is hitting .354 (52-for-147) on the year with 11 doubles, three triples, four homers, 41 runs scored, 30 RBI and 10 stolen bases … Morgan is currently riding a 10-game hit streak – his second-longest of the season – and he had an 11-game hit streak earlier this year
•    Junior right-hander AJ Labas fired the first complete game in three years by an LSU pitcher Friday night when he defeated ninth-ranked Ole Miss … Labas limited Ole Miss – which entered the series No. 2 in the SEC in team batting average (.301) – to two runs on 10 hits in nine innings with one walk and six strikeouts … he threw a career-high 126 pitches in the win, which clinched the SEC series victory for the Tigers … the complete game was the first by an LSU pitcher since April 24, 2018, when Labas himself recorded a nine-inning shutout of Lamar in Baton Rouge … Labas’ 126 pitches were the most thrown by an LSU hurler since June 2, 2012, when Kevin Gausman threw 129 pitches in eight innings against Oregon State in the NCAA Baton Rouge Regional … Labas is 3-0 this season with a 3.15 ERA and 56 strikeouts in 60 innings

ABOUT GRAMBLING STATE
•    Heading into its Monday afternoon game at Texas Southern, Grambling is 13-18 overall this season, and the Tigers are 10-4 in the Southwestern Athletic Conference … Grambling is hitting .275 as a team with 29 home runs and 65 stolen bases in 78 attempts
•    The Tigers are led at the plate by Jahmol Percival, who is hitting .376 with seven doubles, four triples, four homers and 34 RBI … Cameron Bufford is hitting .301 with six doubles, one triple, six homers and 25 RBI
•    The Grambling pitching staff has a 7.76 cumulative ERA, and it has recorded 251 strikeouts in 269 innings