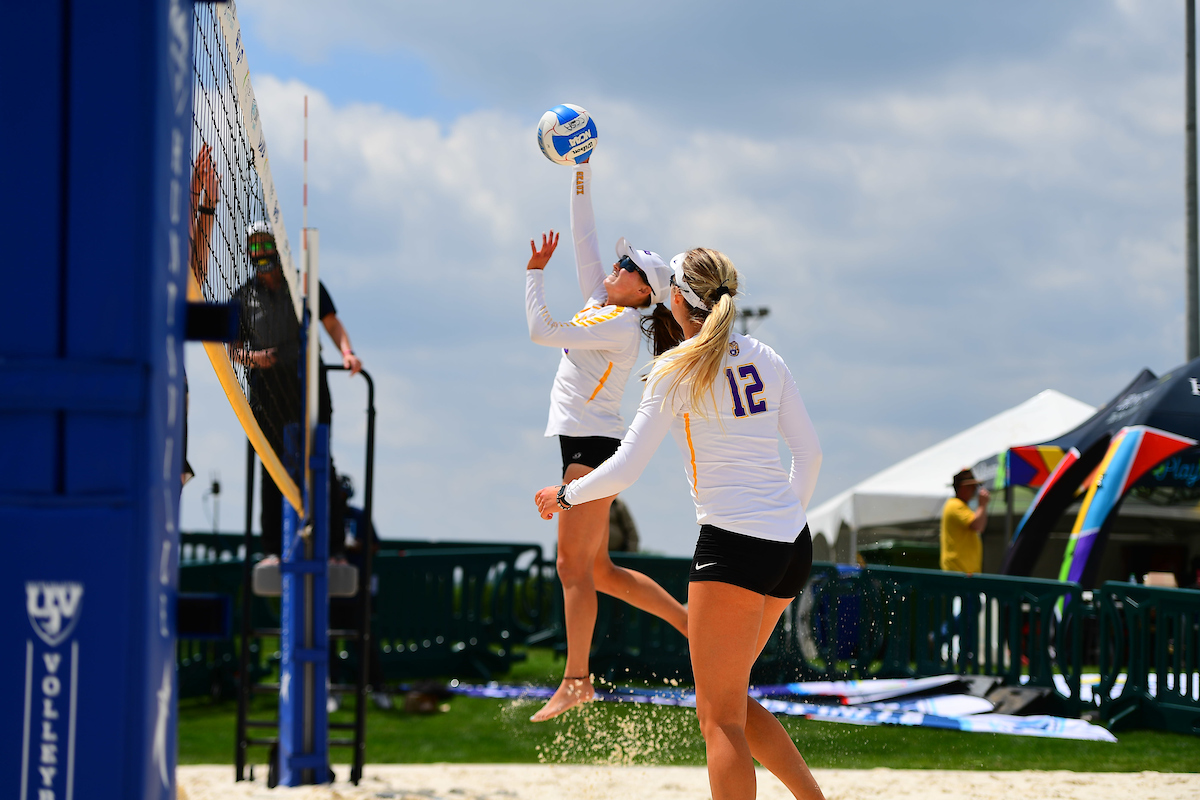 HUNTSVILLE, Ala. – The CCSA Beach Championship match was a battle to the very end, but ultimately LSU fell to Florida State, 3-2, at John Hunt Park.

“The last three times we’ve played Florida State, it has come down to two or three points, max,” said coach Russell Brock. “It stings to come out on the wrong side again.”

In four matches against the Seminoles this season, the Tigers have not won. The Tigers’ season is not over though as the NCAA Championship is scheduled in Gulf Shores May 7-9.

“We have to take that loss and let if fuel us as we have two weeks to get ready for nationals and to do everything in our power to avoid that feeling again,” Brock said.

Courts 1 and 2 finished in two sets, each team taking one of the courts, but Courts 3-5 all went three sets and were drama filled, up for grabs from start to finish.

Taryn Kloth and Kristen won on Court 1, 21-14 and 21-18, improving to 32-0 on the season. The LSU duo was named to the CCSA All-Tournament team after a perfect weekend in which they did not drop a set. Olivia Ordonez and Kahlee York from Court 5 were also selected to the All-Tournament team.

Claire Coppola and Kelli Greene-Agnew fell on the second court, 21-10 and 24-22, as FSU evened the match at one court for each team.

Ashlyn Rasnick-Pope and Grace Seits lost the first set on Court 3, 21-12. They were able to force a third set though when they won the second set, 21-19. When Florida State took the third set, 15-10 all attention turned to Court 4 and 5 that were both neck and neck.

At one point, both third sets on Court 4 and 5 had LSU with a 9-8 lead. Each court traded points back and forth. With the match up for grabs, LSU would have needed wins on both courts to win the championship.

York and Ordonez were serving match-point while Lansman and Moore were receiving match-point, 14-13 on both courts. Court 4 finished first as FSU secured the championship. A couple of seconds later Ordonez and York took Court 5, but it was too late as FSU won, 3-2.

“The effort that our team showed and how hard they fought, on every single court, is the effort that is demanded in matches like this,” said Brock. “From now on, every match we play will be that level of intensity.”