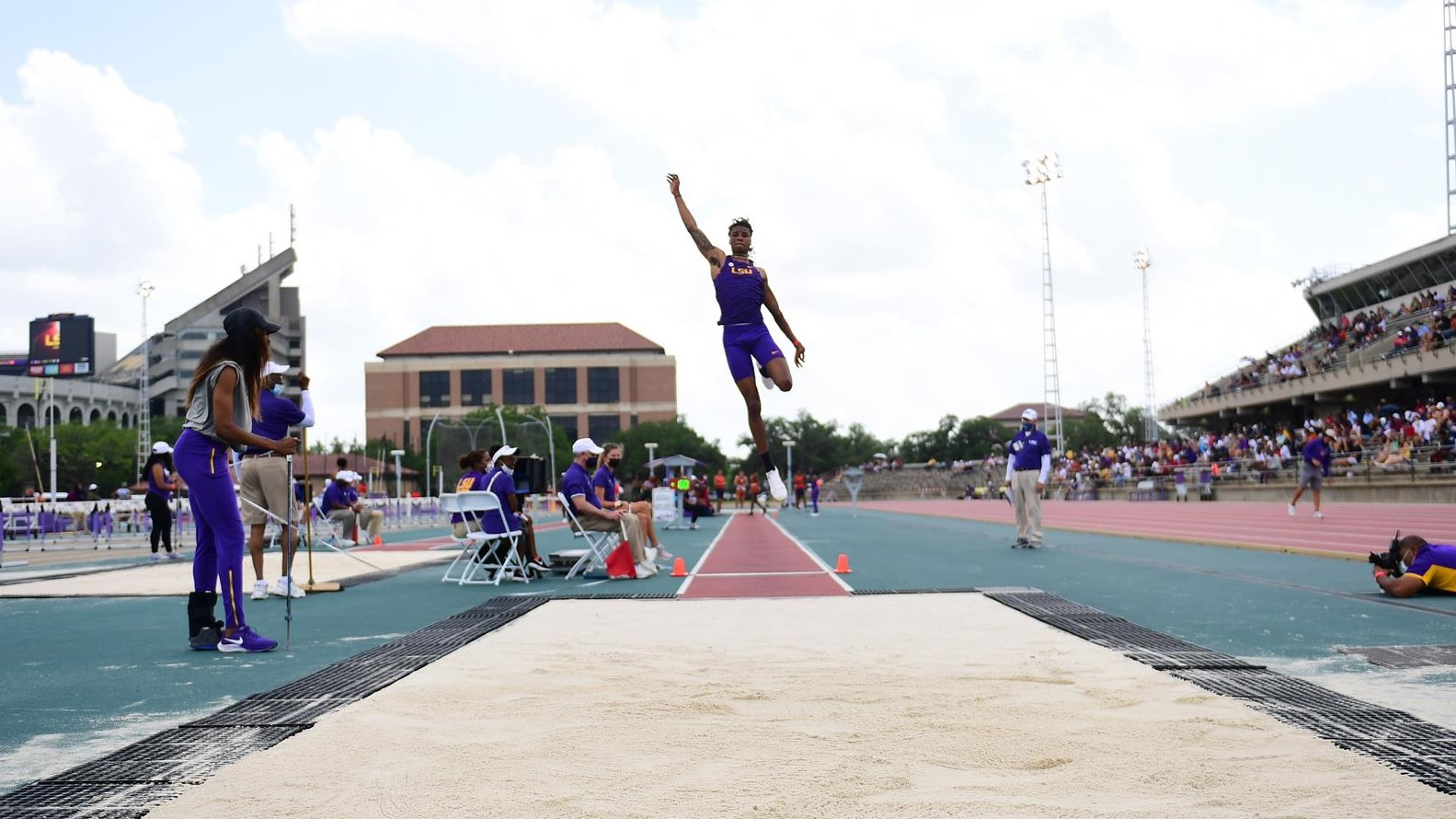 The first world lead of the day came in the women’s 4×100 meter relay. The foursome of Tonea Marshall, Favour Ofili, Symone Mason, and Thelma Davies clocked an NCAA and world leading time of 42.70 to win their fifth straight event title in a row this season. LSU remains the only collegiate team to run a sub 43 time this season.

JuVaughn Harrison and Rayvon Grey, the best long jumping duo in the nation by a longshot, went one-two in the long jump on Saturday. Harrison showed impressive form in his outdoor opener in the event with an outdoor personal best of 27′ 8.25″ (8.44 meters) to take gold. The mark is impressive as all get out as it ranks No. 1 in the world this season, No. 2 in the LSU record book, and No. 6 all-time in collegiate history. Grey finished in second with a wind-aided leap of 26′ 10.50″ (8.19 meters). Harrison owns the NCAA lead and Gray now ranks No. 3 this season and these two have combined to win a combined three long jump national titles during their LSU careers.

The final world and NCAA lead of the day came from Noah Williams, who was running his first open 400 meter race since he won the NCAA indoor title in mid-March. Williams got out and never looked back as he clocked a winning time and personal best of 44.30 to take a commanding lead in the world rankings this season. The 44.30 makes him the second fastest in LSU history and the 12th best performer in collegiate history outdoors.

The two additional NCAA leads on Saturday came from senior Tonea Marshall in the 100 meter hurdles and freshman Sean ‘Squirrel’ Burrell in the 400 meter hurdles. Marshall, who remained undefeated this season in the 100 meter hurdles, ran a wind-aided 12.53 to improve upon her season best of 12.70. It’s the fastest all-conditions time of her career and it ranks her No. 2 on the all-conditions world list for 2021. Burrell won his fourth straight event in the 400 meter hurdles and did so against stout competition. He lowered his PR by more than a full second for a winning time of 49.12 to take over the NCAA lead; he beat three other NCAA top 10 ranked hurdlers in the race. The time of 49.12 ranks No. 4 in LSU history and is the second fastest in the world this calendar year.

Terrance Laird had another quality showing in the 200 meters on Saturday as he ran out to a win in a time of 19.82 seconds with a 2.4 meter per second wind aiding him. Freshman Sean-Dixon Bodie won the LeJuan Simon Triple Jump event with a personal best of 53′ 7.75″ (16.35 meters) to become the 10th best ever LSU triple jumper; it also ranks as the top mark in the nation by a freshman this season. The men’s 4×100 meter relay won gold against some of the top relays in the country with a time of 3:01.85 that was just off their season best of 3:01.00. That relay was made up of Dorian Camel, Noah Williams, Tyler Terry, and Sean ‘Squirrel’ Burrell.

LSU had a plethora of other quality performances by athletes who narrowly missed out on event wins. Let’s start with Symone Mason who nearly broke the 11 second barrier in the 100 meters with a personal best time of 11.02 seconds; that time makes her the second fastest in the NCAA this season and she ranks No. 7 in the LSU record books. The quarter mile duo of Amber Anning and Favour Ofili finished second and fourth in the 400 meter dash with personal bests; Ofili was narrowly beat at the line as she ran a time of 51.49 and Anning followed in fourth at 51.97. Those times both rank as top 10 times this season in the NCAA and Ofili’s time of 51.49 is the sixth fastest in LSU history.

Eric Edwards Jr. ran his career best in the 110 meter hurdles with a time of 13.46 to finish third overall. Teammates Damion Thomas (13.37) and Arthur Price III (14.04) finished second and fourth, respectively. Freshman Tzuriel Pedigo launched the javelin a season best distance of 239′ 10″ (73.10 meters) to move up to No. 2 on the all-time list and into No. 10 on the NCAA list this season.

Nyagoa Bayak actually finished in second for the high jump going off misses, but her outdoor collegiate best clearance of 5′ 10.75″ (1.80 meters) moved her into the No. 9 spot in the LSU record book. The final athlete of the day to make her way into the LSU record book was Ashley LaJocies, who became the fourth fastest 3,000 meter steeplechase runner in program history with a PR of 11:05.78 to finish third overall in the race.