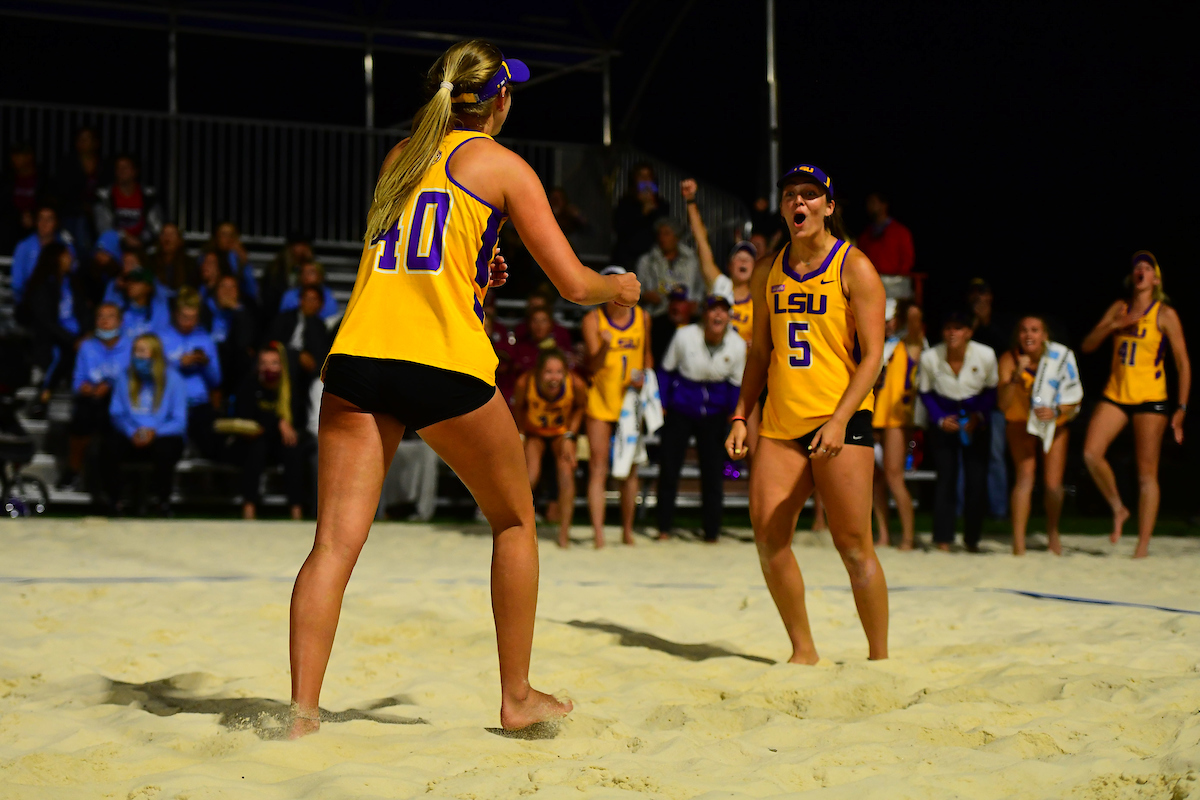 HUNTSVILLE, Ala. – After the match was rescheduled from Saturday morning to Friday night, the LSU Beach Volleyball team defeated TCU in dramatic fashion, 3-2, to advance to the CCSA Aqua Bracket Semi-Finals Saturday at 2:30 p.m. CT. Olivia Ordonez and Kahlee York won in three sets on Court 5 with the match tied at two, sending the Tigers to semis.

“I’m really proud of the fives,” said head coach Russell Brock. “We’ve needed them to come through in big matches this year so to have them do it in such a clutch way in a big moment is a huge testament to the hard work they’ve put in the last few weeks to get better. We needed that tonight.”

The LSU Beach Volleyball team was not supposed to play its match against TCU until the morning, but the schedule shuffled around as some inclement weather is expected in the Huntsville area throughout the day tomorrow. The team found out just before 3 p.m. that it would be playing a second match this evening after defeating Missouri State earlier in the day.

“That could have been something that derailed us or gave us an excuse,” Brock explained. “All the way through the lineup, we battled. We knew TCU was going to come in with a lot of energy because that’s their M.O. To be able to stand up against that was huge.

“We love getting 5-0 finishes, but we also have to know we can finish when it’s tight.”

The drama came on the fifth court. Olivia Ordonez  and Kahlee York won the first set there, 21-15, but fell in the second set, 21-19. The LSU duo trailed 5-6 on the third set, about to go on an impressive run. Ordonez and York swept the remaining 10 points. Ordonez seemed to block everything at the net and with everyone packed around Court 5, the LSU fives pair won, 15-6, sending he Tigers to the semi-finals.

Kahlee and Liv rattled off 10-straight points to propel to Tigers to the semi-finals of the CCSA Tournament! pic.twitter.com/KHANPqV657

The matchup against FSU will be Saturday afternoon, assuming the weather holds up and the Tigers will face a familiar foe. LSU is 0-2 against Florida State this season, but the postseason would be the perfect time to down the Seminoles.

“The one thing that we know we have to pull off is defeating that team,” Brock said of FSU. “We’ve been close, but close doesn’t cut it. We’ve got a shot tomorrow and it would be a great place to do it.

“The weather might be bad and it’s another scenario where timing may be off as far as the schedule, but those are all excuses and the team that responds best to whatever scenario is out there will have the best chance to win. We want to be that team.”