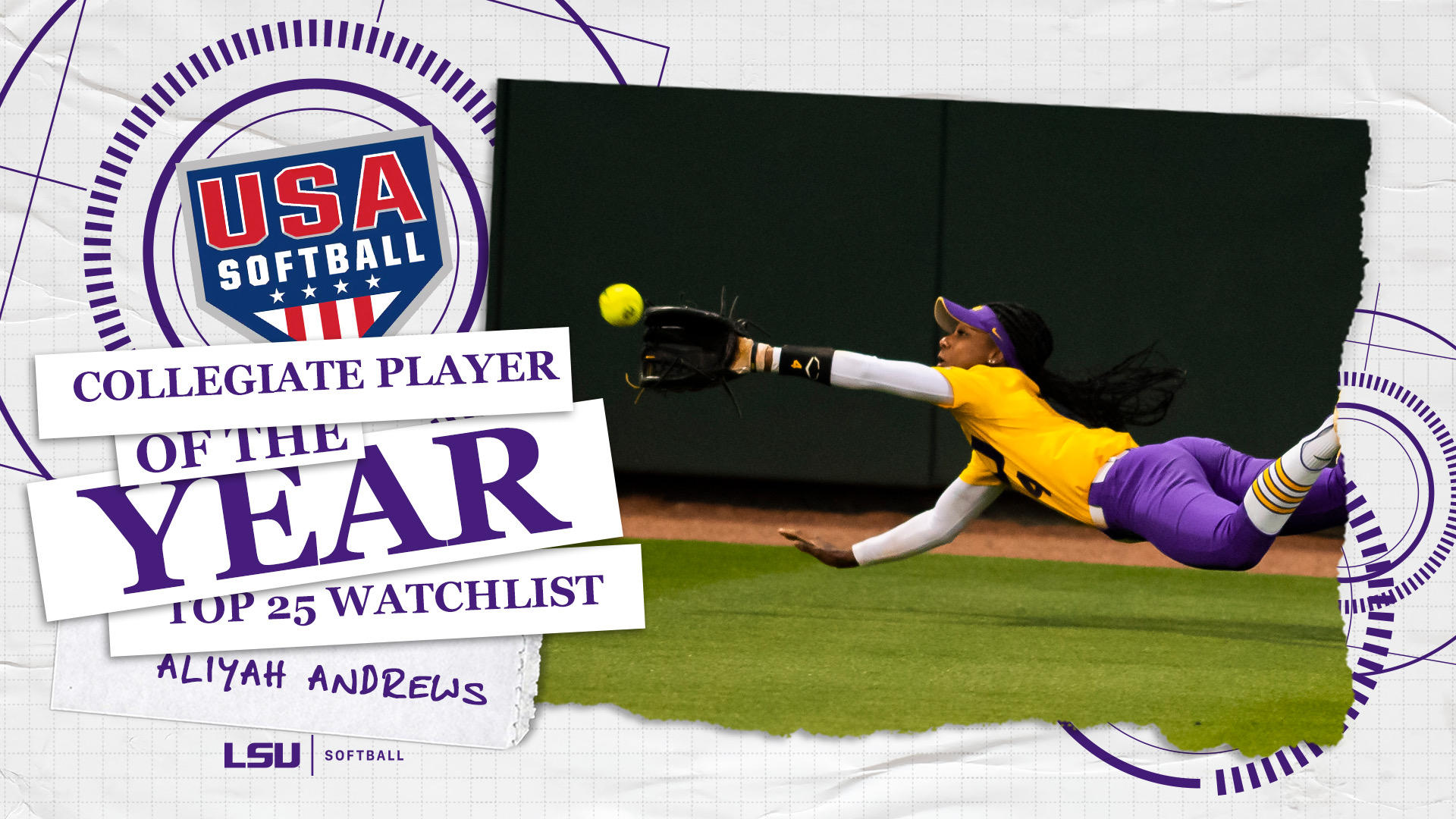 BATON ROUGE – LSU senior softball outfielder Aliyah Andrews has been named one of the Top 25 Finalists for USA Softball Collegiate Player of the Year announced on Friday.

The USA Softball Collegiate Player of the Year award, which is considered the most prestigious honor in Division I women’s collegiate softball, recognizes the outstanding athletic achievement by Division I female players across the country.

Andrews leads the team in batting average (.366), hits (49), runs scored (35) and stolen bases (22-of-24) this season for the Tigers, 26-14 and 8-7 in the Southeastern Conference entering Friday night’s three game series at Kentucky. Andrews is a three-year letterman from Oldsmar, Florida.

Andrews is second in the SEC in stolen bases and 23rd in the NCAA, while he four triples is ranked 18th in the NCAA. She is tied for second in games played for her career at 251 and is the active Division I career leader in steals at 140.

The list of 25 Finalists will be narrowed to 10 Finalists on May 5 before the Top 3 Finalists will be announced on May 19. The 2021 USA Softball Collegiate Player of the Year will be revealed prior to the 2021 NCAA Women’s College World Series (WCWS), which is set to take place June 3-9 at the USA Softball Hall of Fame Complex.

USA Softball (USAS) is a 501(c)(3) not-for profit organization headquartered in Oklahoma City, Okla., and is designated as the National Governing Body (NGB) of Softball in the United States and a member of the United States Olympic & Paralympic Committee. One of the nation’s largest sports organizations, USAS sanctions competition through a network of Local Associations, which includes all 50 states and select metro associations.  USAS is dedicated to providing people of all ages the opportunity to play the game they love at a variety of levels by offering recreational, league, tournament and competitive play for fast pitch, slow pitch and modified pitch.  USAS annually conducts thousands of tournaments throughout the country including over 100 National Championships.  The USAS umpire program is among the nation’s largest and are widely known as the best trained umpires in the game.

As the NGB for the sport of softball, USAS is responsible for training, equipping and promoting the six USA Softball National Teams that compete in events such as the Olympics, Pan American Games, World Championships and other international and domestic events. For more information on USAS, including its founding and history as the Amateur Softball Association of America (ASA), please visit, www.USASoftball.com.