Kloth and Nuss Named CCSA Beach Pair of the Year 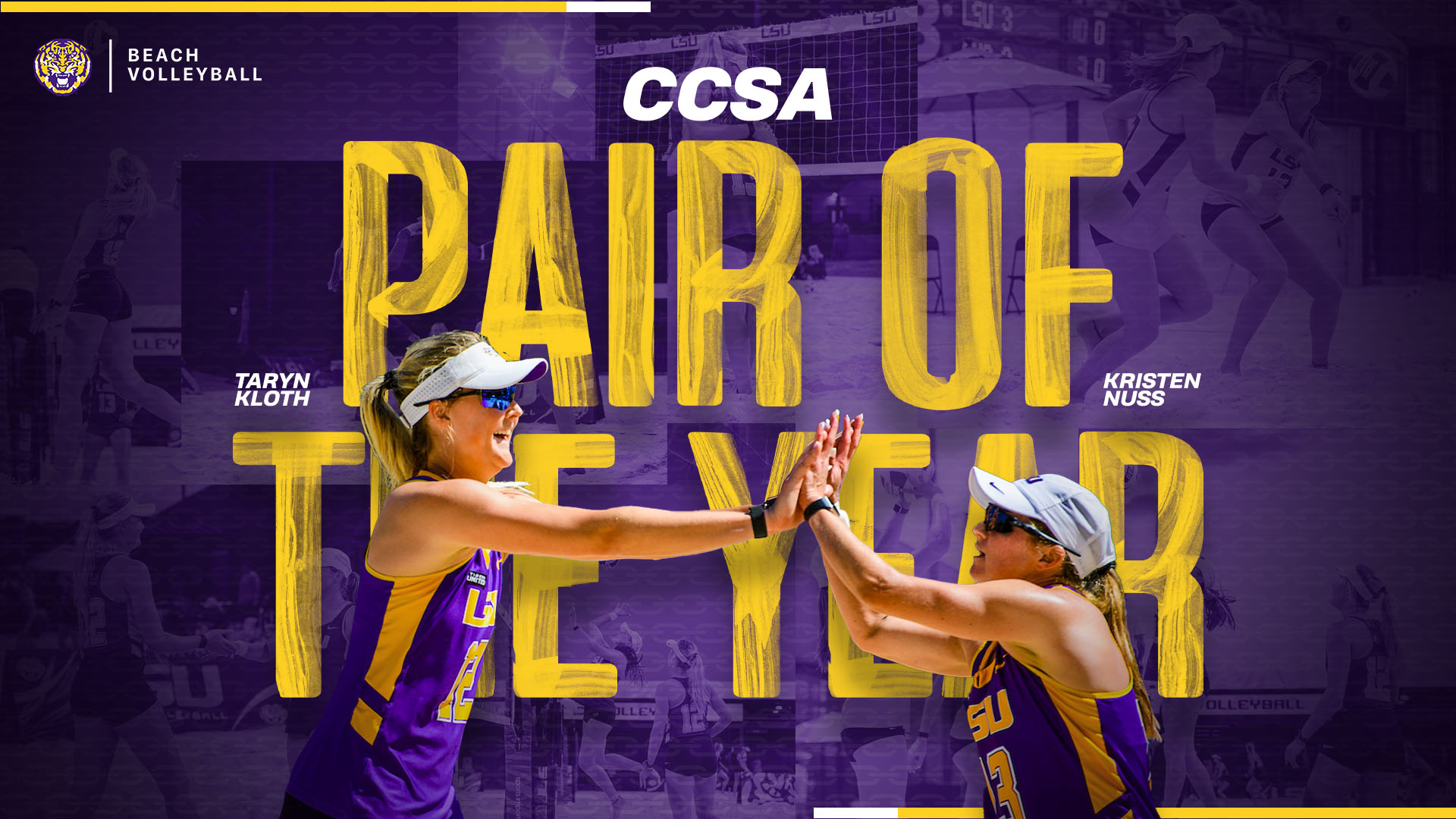 HUNTSVILLE, Ala. – Taryn Kloth and Kristen Nuss were tabbed as the CCSA Pair of the Year on Thursday and both were named as the only unanimous selections to the All-Conference team selected by the league’s coaches.

For Nuss, this is the fourth time she has been selected to the CCSA All-Conference team, becoming the first player in conference history to do so.

Along with Nuss, Claire Coppola was selected to the CCSA All-Academic Team as well.

Taking care of business in the classroom and in the sand ???? pic.twitter.com/EOmyq49aZm

The Tigers are set to begin play at the CCSA Conference Tournament in the Aqua Bracket this weekend in a double-elimination format. LSU will face Missouri State Friday at 11:30 a.m. CT in the first round.

Kloth, a native of Sioux Falls, S.D. and Nuss, from New Orleans, have been the most dominant pair in the nation this year with a 27-0 record competing against other team’s best competition on Court 1. Of their 27 victories, 24 have come in straight sets.

The same four teams have occupied the AVCA Top-Four throughout the entire season – LSU, Florida State, UCLA and USC. The Tigers have faced each of the other three teams twice. Kloth and Nuss are 6-0 against their top pairs.

Having success on Court 1 is nothing new for Nuss. Earlier this season, the 5-6 defender became the winningest player in the history of college beach volleyball. Nuss enters the postseason with 130 career victories.

Prior to the season, Kloth was named CollegeBeachVB.com’s Preseason Breakthrough Player of the Year. She has done everything to live up to that billing. During the shortened 2020 season, Kloth showed her potential and was 13-0 on Court 4 with Kelli Greene-Agnew. The pair did not drop a set during those 13 matches.

Last Summer was when the 6-4 blocker showed her real potential to make the jump from Court 4 to Court 1 with Nuss and is why she was billed as the Preseason Breakthrough Player of the Year.

Showing their ability to be a menacing pair during the offseason, Kloth and Nuss were paired together on Court 1 to begin the 2021 season for the Tigers. With Kloth’s physical presence at the net and Nuss’ quick-footedness behind her with the ability to get to nearly every ball, the pair has solidified themselves as the top pair in not just the conference, but the country, mowing down any pair that has come in their way.

On Sunday, the LSU duo squared off against USC’s Tina Graduina, a qualified Tokyo Olympian in her home country of Latvia, and Sammy Slater, an All-American. The first match against the Trojans came down to a third set on Court 1 as the overall match was tied at 2-2. Kloth and Nuss never wavered and won the third set to give LSU the victory. In the second match, Kloth and Nuss won in straight-sets.

The All-Academic Team recognizes student-athletes who excel both in the sand and in the classroom. All the members of the team boast a 3.30 cumulative grade point average or better and participated in at least half of their team’s games.

Nuss is currently enrolled in graduate level classes after earning her B.S. in Kinesiology in December with a 3.67 GPA. This is the third time she has been named to the CCSA All-Conference team. She was named on the 2021 Spring SEC Honor Roll as well.

Coppola is working towards finishing her third LSU degree which will be a Master’s in Leadership and Human Resource Development. She has a B.S. in Marketing and Professional Sales as well as her Master’s in Business Administration. She has carried over a 4.0 GPA throughout her academic career and has a job lined up in Los Angeles where she will be doing Orthopedic Medical Device Sales for Sports Surgeries.

In the sand, Coppola is no stranger to success with 120 career victories, tied for the fourth most in college beach volleyball history. With four more victories she would move into the No. 2 spot.

Pair of the Year: Taryn Kloth and Kristen Nuss, LSU