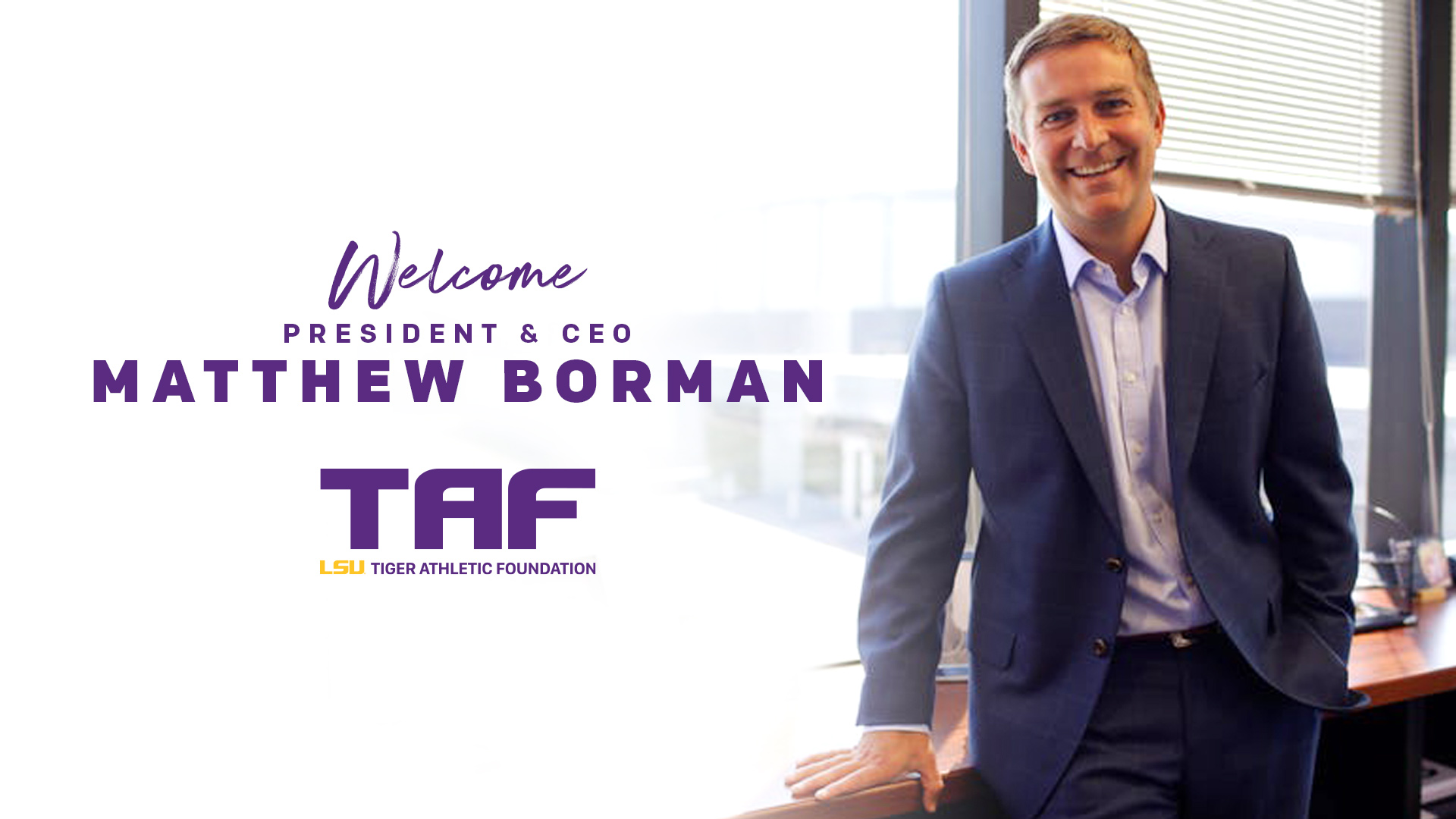 BATON ROUGE – Matthew Borman, who has overseen record-setting efforts over a 17-year career in collegiate athletics fundraising, has been named President and Chief Executive Officer for Tiger Athletic Foundation (TAF), TAF’s Board of Directors announced on Wednesday.

Borman replaces long-time TAF leader, Rick Perry, who announced his retirement earlier this year after 34 years of exemplary service. Borman will step in to his new role with Tiger Athletic Foundation on June 7.

“After considering a diverse pool of excellent candidates, we are delighted Matt accepted our offer and will serve as the next TAF president and CEO,” said TAF Board Chair Theresa Gallion. “He brings a wealth of knowledge and experience that will further our mission of supporting LSU student-athletes in the classroom, in competition, and in life.”

Borman joins TAF after serving as the Deputy Athletic Director at Georgia since 2017. During his four years at Georgia, Borman oversaw the most successful fundraising period in the history of Bulldog athletics.

Prior to his time at Georgia, Borman served as West Virginia’s lead fundraiser and the executive director of the Mountaineer Club. Under his leadership, fundraising at West Virginia reached record levels with his efforts leading to a new basketball practice facility, weight room and team room for the football program and a women’s soccer practice facility.

“I am appreciative of Theresa and the Tiger Athletic Foundation Board of Directors for the opportunity to lead TAF’s fundraising efforts. I look forward to working with the university, the athletic department and other organizations to continue the momentum created under Rick’s leadership, and to build upon the rich history of TAF donors supporting LSU student-athletes on and off the field. My family and I are excited to be in Baton Rouge, and join the TAF and Tiger family,” shared Borman.

TAF’s primary mission is to provide private financial support for LSU Athletics. During its 34-year history, TAF has supported the programs and facilities of the athletic department seeking to make an impact on LSU student-athletes’ success on and off the field.

“We are excited to welcome Matt and his family to Baton Rouge,” LSU Director of Athletics Scott Woodward said. “We look forward to working alongside him to continue to provide our student-athletes with the tools necessary to receive a world-class education while also giving them the opportunity to compete and win at the highest levels.”

About Tiger Athletic Foundation
Tiger Athletic Foundation (TAF) is a private, nonprofit, corporation dedicated to supporting LSU and its Athletic Program. TAF is exempt from federal income tax under section 501(c)(3) of the Internal Revenue Code.  Since 1987, TAF’s members have enhanced the lives of every student-athlete on every team by providing financial support for programs and facilities that ensure the opportunity to win in the classroom, on the field, and in life.