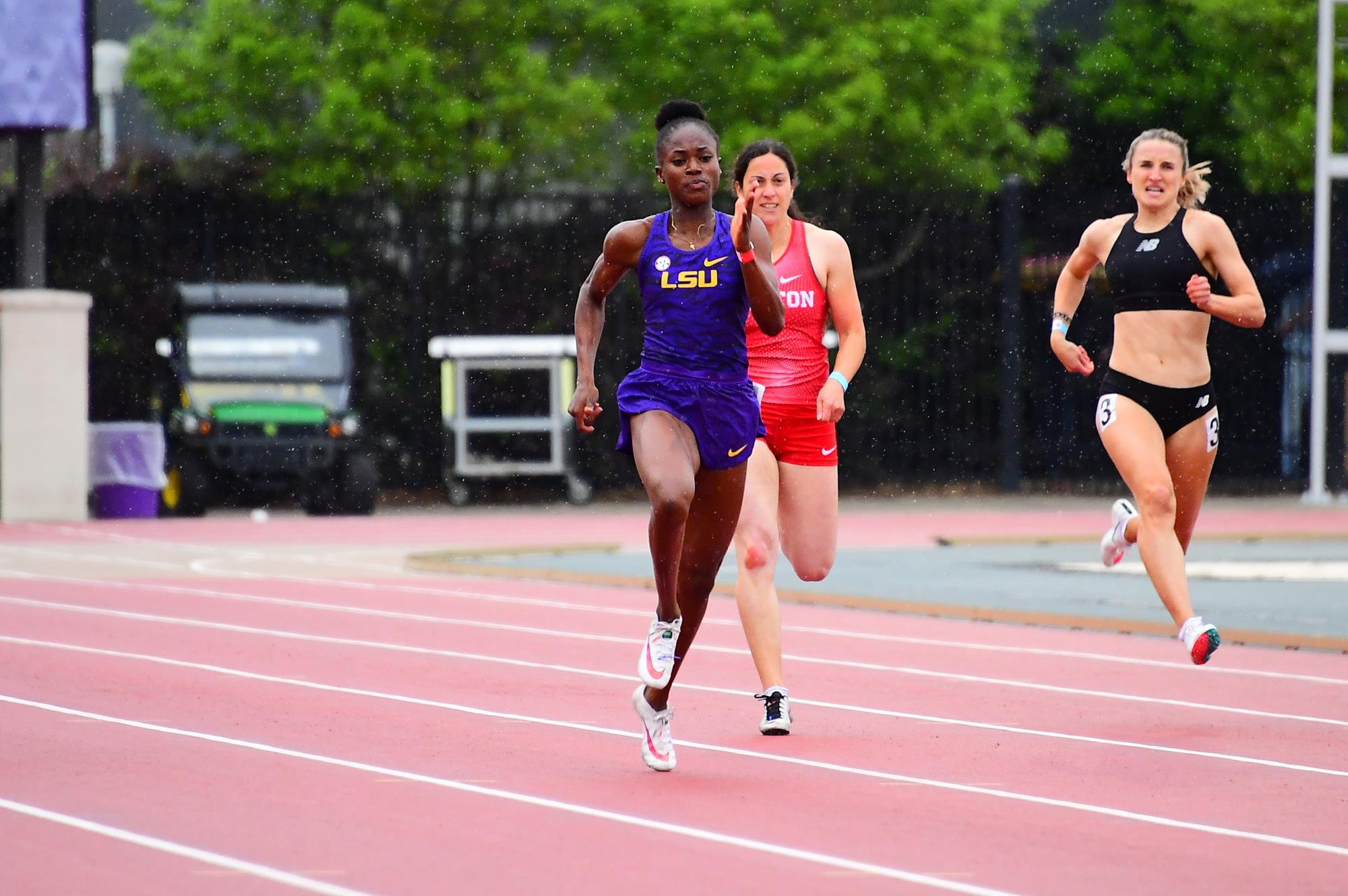 Baton Rouge, La. –   LSU track and field sprinter Favour Ofili ran a NCAA best time of 22.30w on Saturday afternoon at the Boots Garland Invitational that was held at the Bernie Moore Track and Field Stadium. The Tigers registered 11 total wins on the day.

The Tigers had four athletes, two men and two women, that registered top ten NCAA marks on Saturday.  Ofili ran her aforementioned wind-aided time of 22.30w in the women’s 200 meter dash which ranks as the number one mark in the NCAA so far this season.  The blazing time was helped by a 2.6 meters per second tailwind as the race was run with a light rain in the air. The other female athlete to etch their way into the NCAA top ten list was Milan Young. Young ran a personal best time of 12.95 to rank sixth in country to come out as the top competitor in the 100 meter hurdles.

The men’s squad was also able to put together a couple of NCAA top ten marks as Terrance Laird and Sean ‘Squirrel’ Burrell ran very fast times in their respective events.  Laird competed in the men’s 100 meter dash where he ran an impressive time of 10.06 for the fastest wind legal time of his career.  The Coatesville, Pa., natives winning time is the second fastest in the NCAA and sits at number four in LSU history.  Sean Burrell, who also has an NCAA top ten mark in the 400 meter dash, improved upon his already top ten time in the 400 meter hurdles. Burrell ran a time of 50.15, ranking as the sixth fastest in the country as well as the eighth best mark in LSU history.

Noah Williams and Eric Edwards Jr. also made a strong contribution to the Tigers’ efforts as they both won gold medals.  Eric Edwards Jr. won the men’s 110 meter hurdles with a wind aided time of 13.67.  Arthur Price III closely followed Edwards Jr. as he placed second with a time of 13.88.  Noah Williams would later go on to win the men’s 200 meter dash with the fastest wind legal time of his career, a 20.36. Jurnee Woodward moved to a perfect 2-0 this year in 400 meter hurdle races; she clocked a winning time of 58.88.

The relays proved to be the team’s winningest event as the Tigers won both the men’s and women’s 4×100 and 4×400 meter relays.  The first group to go was the women’s 4×100 meter relay team that holds the fastest time in the nation.  The team consisting of Tonea Marshall, Favour Ofili, Symone Mason, and Thelma Davies ran a time of 43.00 to secure the victory for the Tigers.  Later in the day LSU fielded a team made up of Amber Anning, Milan Young, Leah Phillips, and Hannah Carroll to compete in women’s 4×400 meter relay.  They would go on to get the win with a time of 3:42.19.

The men’s relay teams ended up putting together similar results as they swept the relay races.  The Tigers won the 4×100 meter relays with a time of 38.82, coming close to their season best time of 38.70.  The winning 4×100 relay team included Dylan Peebles, Noah Williams, Dorian Camel, and Terrance Laird.  The 4×400 meter relay team swapped out Laird and Williams for Sean Burrell and Tyler Terry and the outcome stayed the same.  The Tigers won the event with a time of 3:10.25.