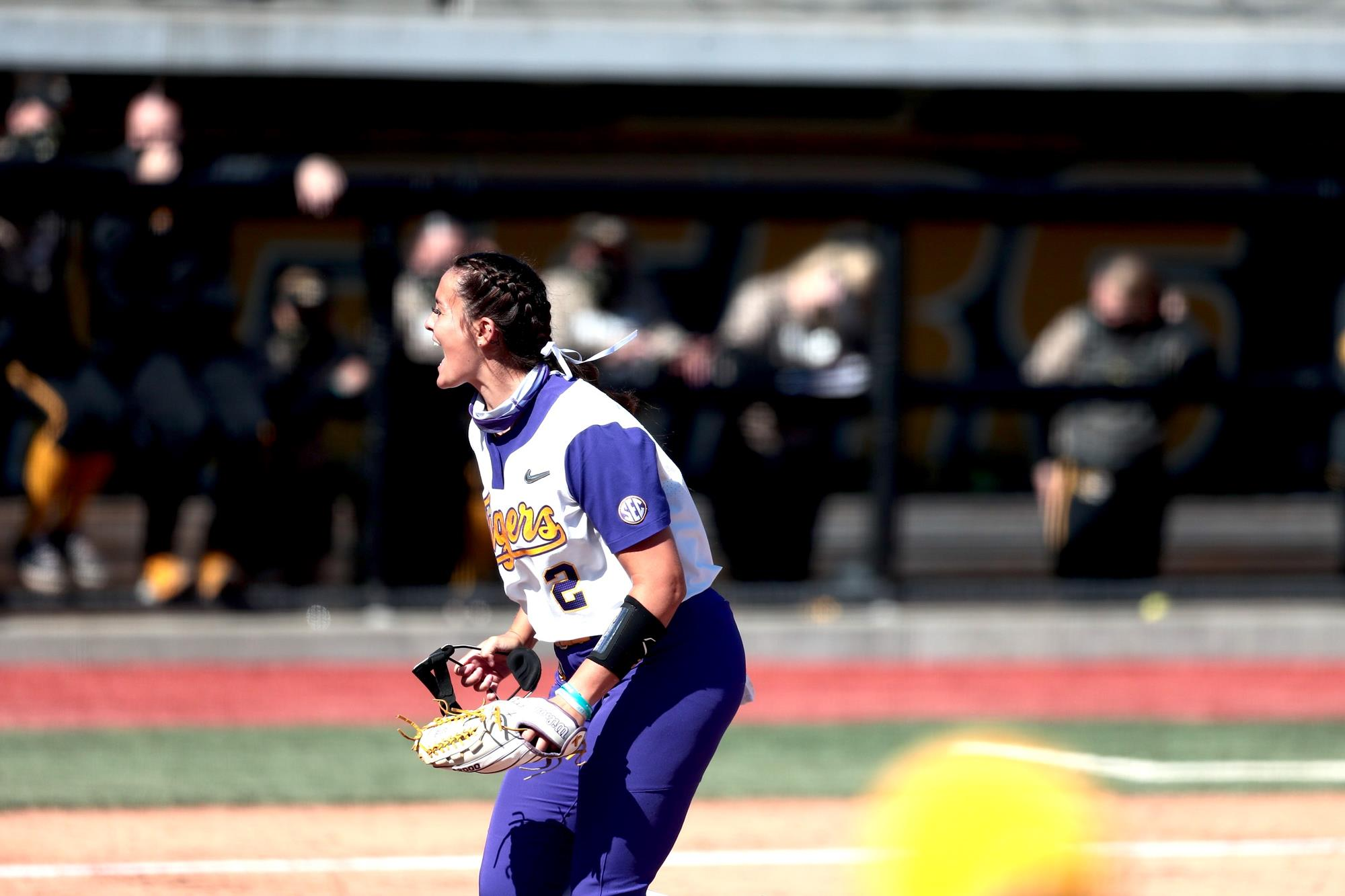 The Fighting Tigers took the opening game of the doubleheader, 4-2, and scored 11 unanswered in game two to take the series finale, 12-5.

Kilponen earned both victories on Sunday for LSU to move to 10-4 on the year. She combined to pitch 13.2 innings, allowed just two runs on seven hits and struck out 15 against a potent Missouri lineup.

“We had great contributions from so many people today,” head coach Beth Torina said. “It truly was a team effort today. Ali Kilponen was incredible. To come back in game two and pitch six innings after her performance in game one was special.”

“The offense was also really strong and relentless throughout the games from top to bottom. Everyone contributed in the lineup and the dugout brought great energy all day. These were two important and hard-fought wins for our team.”

.@AliKilponen put the team on her back today!

Aliyah Andrews shined on offense and defense. She made another spectacular diving grab in the bottom of the second inning of game two and went seven-for-nine with two RBI on the day.

Game Two – 12-5 Win
Kilponen entered in the first inning in relief and limited Missouri’s damage. She shut out Missouri in 6.2 innings of work and only allowed three hits and struck out seven.

Megan Schumacher (8-2) was charged the loss after allowing three runs on four hits in one inning.

LSU took a 1-0 lead in the first after a fielder’s choice and error on the Missouri catcher.

Missouri scored five runs in the first with four of those unearned to respond. Mizzou put two runners on to start the game with a single and error. An RBI single from Hatti Moore and sac fly from Kim Wert scored two. After a throwing error and walk to load the bases, Missouri scored one run on a single up the middle from Riley Frizell and two on a double from Kendall Bailey.

Andrews hit a one-out single down the line in left field to plate another run and chip into the Missouri lead and make it a 5-2 game.

Taylor Pleasants cut the Missouri lead to one run in the fourth. With runners on second and third, Pleasants laced a two-out single to right field to plate two runs.

LSU took a 7-5 lead in the fifth with two outs. Savannah Stewart had her second hit of the season and Jordyn Perkins followed with her first of the year. After the runners moved into scoring position, Ciara Briggs singled to left to plate two. Andrews followed with an infield single to add another run.

Clark provided another run in the sixth on a solo shot over the berm in left field. It was Clark’s second home run of the day.

LSU sealed the series win in the seventh inning. Heads up base running from Briggs and Morgan Cummins scored two runs on a wild pitch. Tidwell and Pleasants then went back-to-back on bombs over the right field fence to seal the 12-5 win.

???IT’S OUTTA HERE @taylortidwell3 breaks this one open with a solo home run to RF. That’s an 11-5 LSU lead in the seventh. pic.twitter.com/FGj2pgtfdN

?? BACK-TO-BACK BOMBS ??@Tpleasants17 launches that one over the fence in right field! pic.twitter.com/rcv14kz5pF

Game One – 4-2 Victory
Kilponen earned the win after allowing just two runs. Kilponen struck out eight, including four to end innings. Kilponen stranded the bases loaded in the sixth with a strikeout and denied Missouri’s comeback attempt in the seventh by stranding two.

Missouri’s Sophie Dandola (3-1) suffered her first loss of 2021. She allowed all four runs, two earned, in four innings. She gave up five hits and struck out just one.

Missouri got things started in the first inning to take a 1-0 lead. Brooke Wilmes led off the game with a double. She advanced to third on a wild pitch and scored on a single up the middle from Hatti Moore.

Georgia Clark evened things up with a solo shot in the second inning for her fifth home run of the season.

LSU ambushed Missouri in the third inning with three runs to take a 4-1 lead. With runners on second and third, Danieca Coffey singled up the middle. A fielder’s choice from Taylor Pleasants and sac fly from Clark plated two more runs.

Missouri added its second run of the game in the fourth inning with a solo home run off the bat of Kim Wert.

On Deck
LSU will travel to Lake Charles, Louisiana, to take on McNeese State at 6:30 p.m. CT Tuesday on CST. The Tigers will then take on NC State on Friday and Saturday in Raleigh, North Carolina for a non-conference series against the Wolfpack.