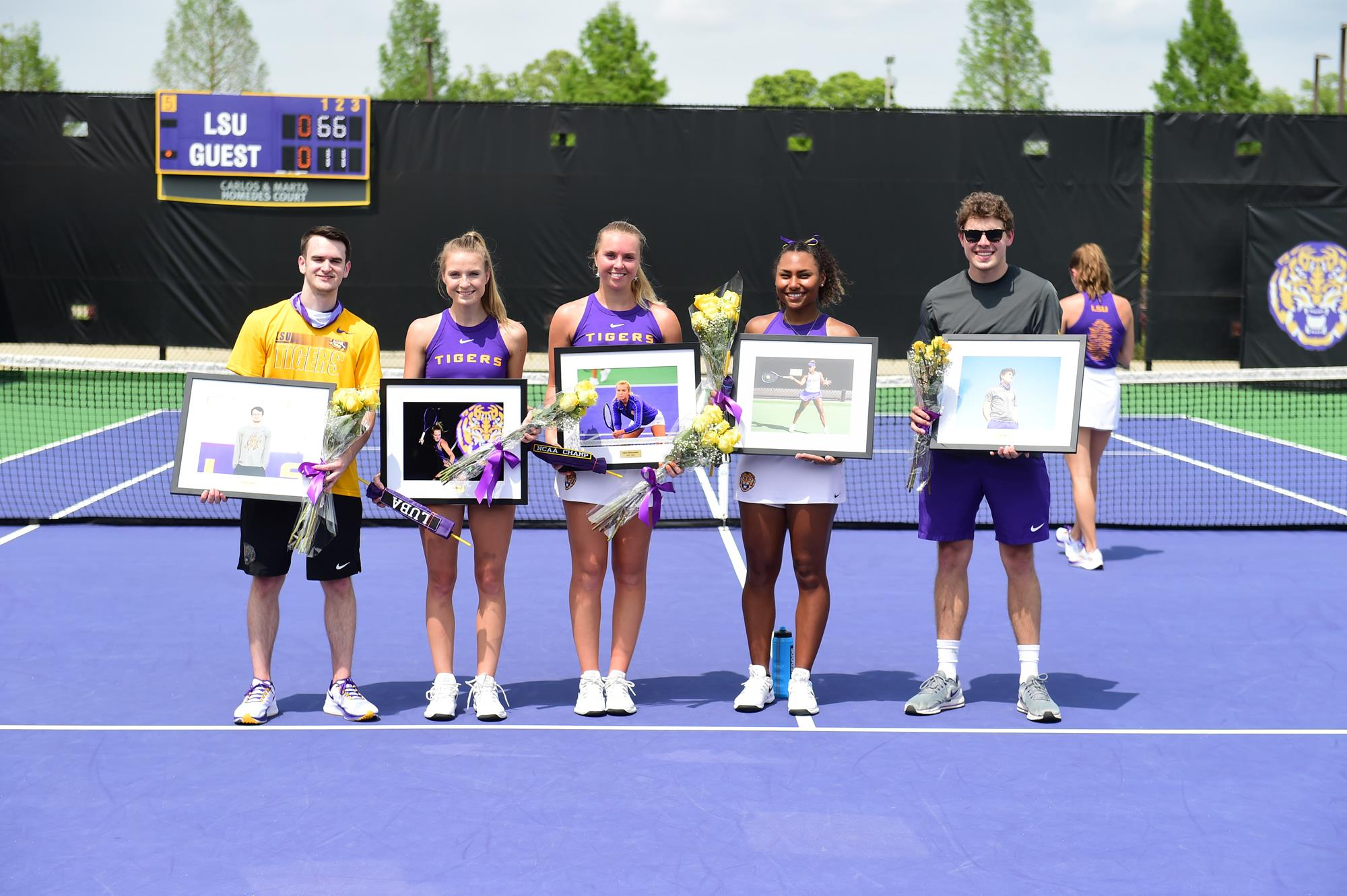 Baton Rouge, La. – The No. 11 LSU Women’s Tennis team brought an end to its regular season campaign in winning fashion as they defeated the Missouri Tigers by a score of 4-1 on Saturday afternoon at the LSU Tennis Complex.

Selling Points
“Phenomenal way to finish the regular season and celebrate our seniors,” co-head coach Michael Sell said. “We’re thrilled that we finished the regular season with a new program high in conference wins and secure a Top 4 seed at the SEC Tournament. We’re proud of the pressure the team applied from the start and the way it carried throughout the match.”

Today was about finishing strong and giving our seniors a good send off, and we accomplished both. Paris (Corley), Eden (Richardson), Luba (Vasilyuk), and our two managers; Ian Sigl and Connor Searle, got a proper celebration and no one deserves it more than that group. Now, we’ll rest up and shift focus to the postseason, where everyone’s 0-0.”

It was Missouri who struck first in doubles play when the No. 69-ranked duo of Bronte Murgett and Marta Oliveria defeated sophomores Safiya Carrington and Maggie Cubitt by a score of 6-2 at the No. 1 doubles.

LSU got one back with a win at the No. 2, where the No. 74-ranked duo of seniors Taylor Bridges and Paris Corley picked up their 15th win as a duo on the season with a 6-3 victory over Elys Ventura and Ellie Wright.

The doubles point went to LSU after the English duo of senior Eden Richardson and junior Anna Loughlan recovered from a slow start to defeat Valentina Vazquez and Romary Cardenas by a score of 6-4 at the No. 3.

Sophomore Nina Geissler broke into double digit singles wins in dual play and gave LSU a 2-0 lead in the afternoon with a straight set win at the No. 5 singles over Cardenas. Geissler dominated both sets, dropping only one game in each of them to win 6-1, 6-1.

Missouri got its lone point of the afternoon at the No. 1, where No. 76 Murgett defeated No. 50 Bridges. Murgett took the first set by a score of 6-0 before carrying momentum into the second and winning 6-2 to cut the lead down to 2-1.

No. 40 Corley picked up her 17th singles win of the year and gave LSU a 3-1 lead after defeating Serena Nash in straight sets. Corley controlled the tempo of the first set, holding off Nash and winning 6-3. Corley kept her foot on the gas in the second set, dropping only one game this time to win 6-1.

The match was clinched at the No. 6, where freshman Samantha Buyckx defeated Goldin in her fourth consecutive straight set win. Buyckx took an early lead in the first set and didn’t look back on her way to claiming it 6-2. The second set saw the scoreline repeated as Buyckx clinched the win for LSU and get her 11th win of the season.

No. 11 LSU will take part in the 2021 SEC Tournament that runs from April 19 to April 23 at the Alabama Tennis Stadium in Tuscaloosa, Alabama.