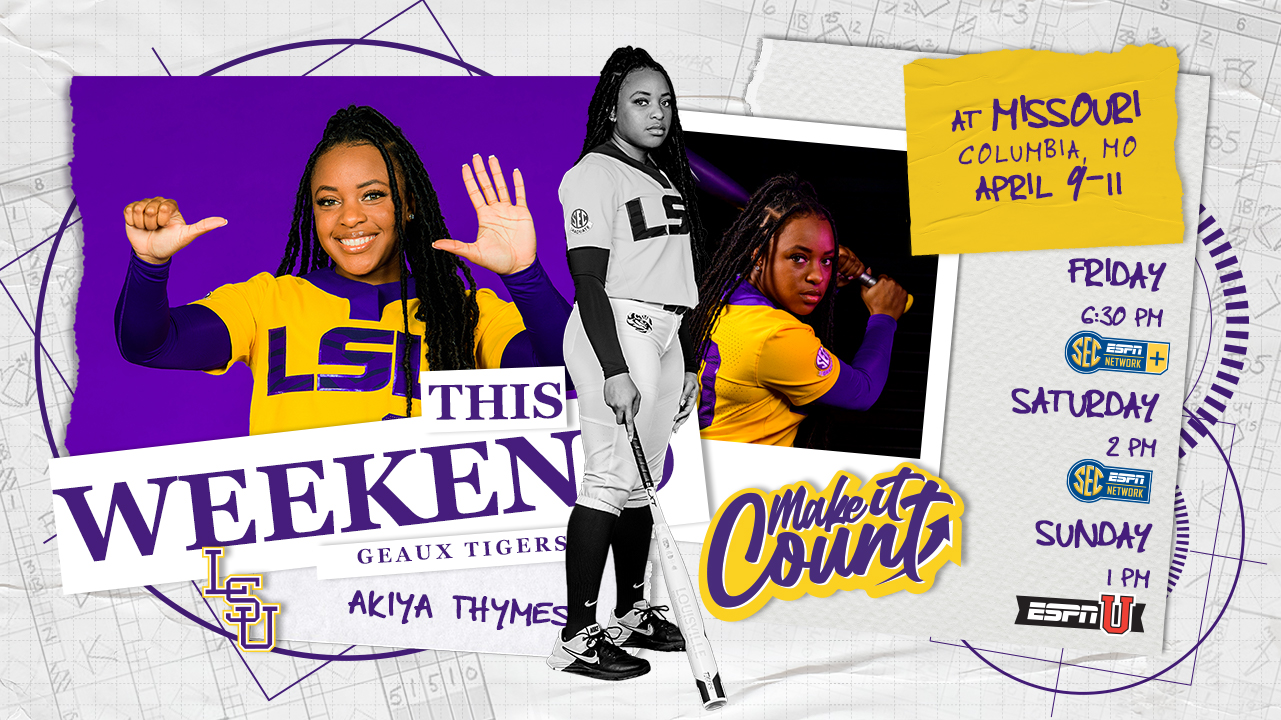 The first two games of the series will be broadcast on SEC Network+ with Nate Gatter and Ashley Moore on the call. The weekend opener begins at 6:30 p.m. and first pitch for game two will be at 2 p.m. The series finale will be at 1 p.m. Sunday on ESPNU with Michele Smith and Beth Mowins on the call.

Patrick Wright has the call of all three games on the LSU Sports Radio Network. Live stats will also be available at LSUstats.com.

About the Tigers
The Tigers are coming off of a hard-fought 6-4 win over Louisiana Tech on Tuesday and SEC series win over Ole Miss over the weekend. Against the Lady Techsters, LSU clawed back from a 4-3 deficit in the sixth to plate three runs. Aliyah Andrews gave LSU the lead and Ali Kilponen shut the door on the Louisiana Tech threat in the fifth inning to secure the victory.

The Tigers have played 16 games against Top 25 teams to start the season. In those
games, LSU is 6-10. The Tigers are 4-8 against Top 10 opponents. LSU is ranked fourth in the NCAA RPI and owns the second-ranked Strength of Schedule.

The Tigers have hit 36 home runs on the season, averaging 1.1 per game. Amanda Doyle leads the team with seven, followed by Shelbi Sunseri and Taylor Pleasants with six each.

Andrews added two more stolen bases against Louisiana Tech to bring her total to 137. She is 19 away from being the LSU all-time leader. Dee Douglas is the current leader with 155 (1998-2001). Her 137 in her career leads Division I active players and is second among all divisions of college softball.

About Missouri?The Tigers are coming off of a sweep over South Carolina over the weekend and have won seven of their last eight games. Missouri is 8-1 in Columbia on the year.

The team is hitting .350 overall, which is number one in the SEC and top-10 in the country. They also lead the league in on base percentage, runs scored, hits, RBI and doubles. Missouri is second in the league in home runs with 52.

Series Record?LSU leads the all-time series with Missouri, 12-7. This is the first series between the two teams since 2018 when LSU took two of three in Columbia.

What’s on Deck?The Tigers return to the road for a non-conference game against McNeese State on Tuesday in Lake Charles. The team will then travel to Raleigh to face NC State in a non-conference series April 16-17.