Kloth and Nuss Claim CCSA Beach Pair of the Week 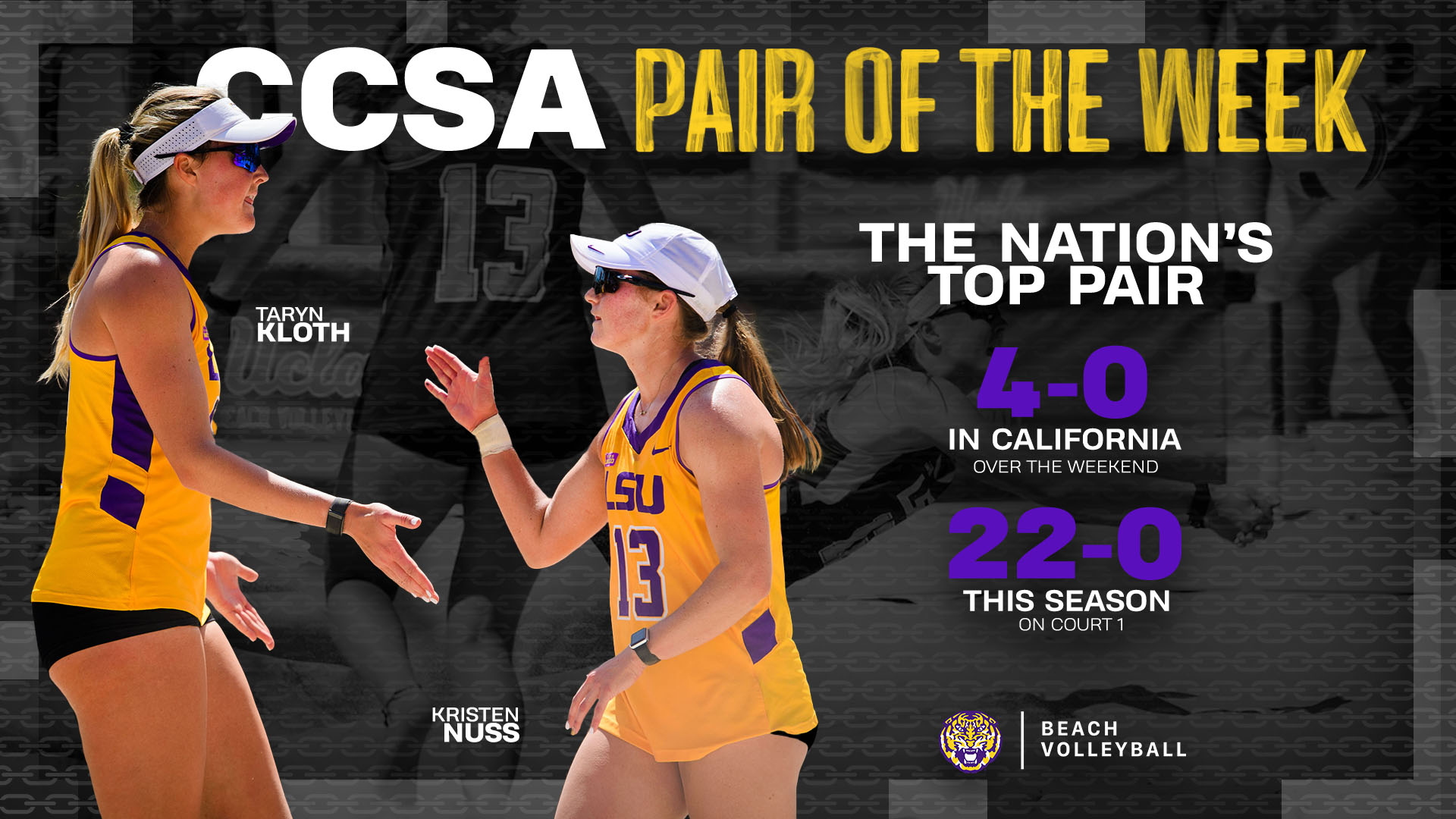 BATON ROUGE – Taryn Kloth and Kristen Nuss claimed CCSA Beach Pair of the Week on Wednesday after improving to 22-0 on the season over the weekend in Los Angeles against some of the other premier pairs in the country at UCLA and USC.

The LSU duo solidified themselves as the nation’s top pair, taking down the defending Pac-12 Pair of the Week, All-Americans and a qualified Tokyo Olympian. Kloth and Nuss are the only Court 1 pair to remain undefeated on the season.

Still Undefeated on Court 1
Best Pair in the Nation pic.twitter.com/WJmiCDfu8u

On Saturday, Kloth and Nuss squared off in two matches against UCLA’s top pair of Lexy Denaburg and Savvy Simmo. Denaburg, a freshman, and Simmo, an All-American, were the defending Pac 12 Pair of the Week.

In the first match against UCLA’s Court 1 pair, Kloth and Nuss handled the first set without much difficulty, 21-14, but from there the two pairs proved to be rather even as the next two sets needed extra points to decide a winner. In the tightly contested second set, Kloth and Nuss fell, 25-23.

The third set of the first match was a marathon. Kloth and Nuss had match-point with a 15-14, but Denaburg and Simmo scored back-to-back points to set up their own match point serve. Over the course of the rest of the set, Kloth and Nuss faced 12 total match-point serves, but the LSU duo put on a masterclass in side-outs and ultimately claimed the third-set, 27-25.

Kristen and Taryn faced 12 match-point serves from UCLA in the third set, but prevailed, 27-25 ?? pic.twitter.com/uPEdqsAqhR

On Sunday, Kloth and Nuss followed a similar model as Saturday, going three sets in the first match and needing only two in the final match. They faced USC’s Tina Graudina and Sammy Slater, both All-Americans. Graudina took a redshirt year in 2020 and spent her time qualifying for the Tokyo Olympics where she will represent her home country of Latvia.

In the first match of the day, the overall match between LSU and USC was tied at two and the match came down to the results on Court 1. Just like Saturday’s first match, Kloth and Nuss did not seem to struggle much at all in the first set and won it, 21-12. Graudina and Slater would squeak out the second set over Kloth and Nuss though, 21-19. With the Tigers leading 14-13 and the overall match up for grabs, Kloth received Slater’s serve and was able to hit it past Graudina’s block attempt as the Tigers took down No. 1 USC.

Once again just like on Saturday, Kloth and Nuss only needed two sets against Graudina and Slater to earn the victory. 24-22 and 21-15, walking out of the weekend as the undisputed best pair in the nation.