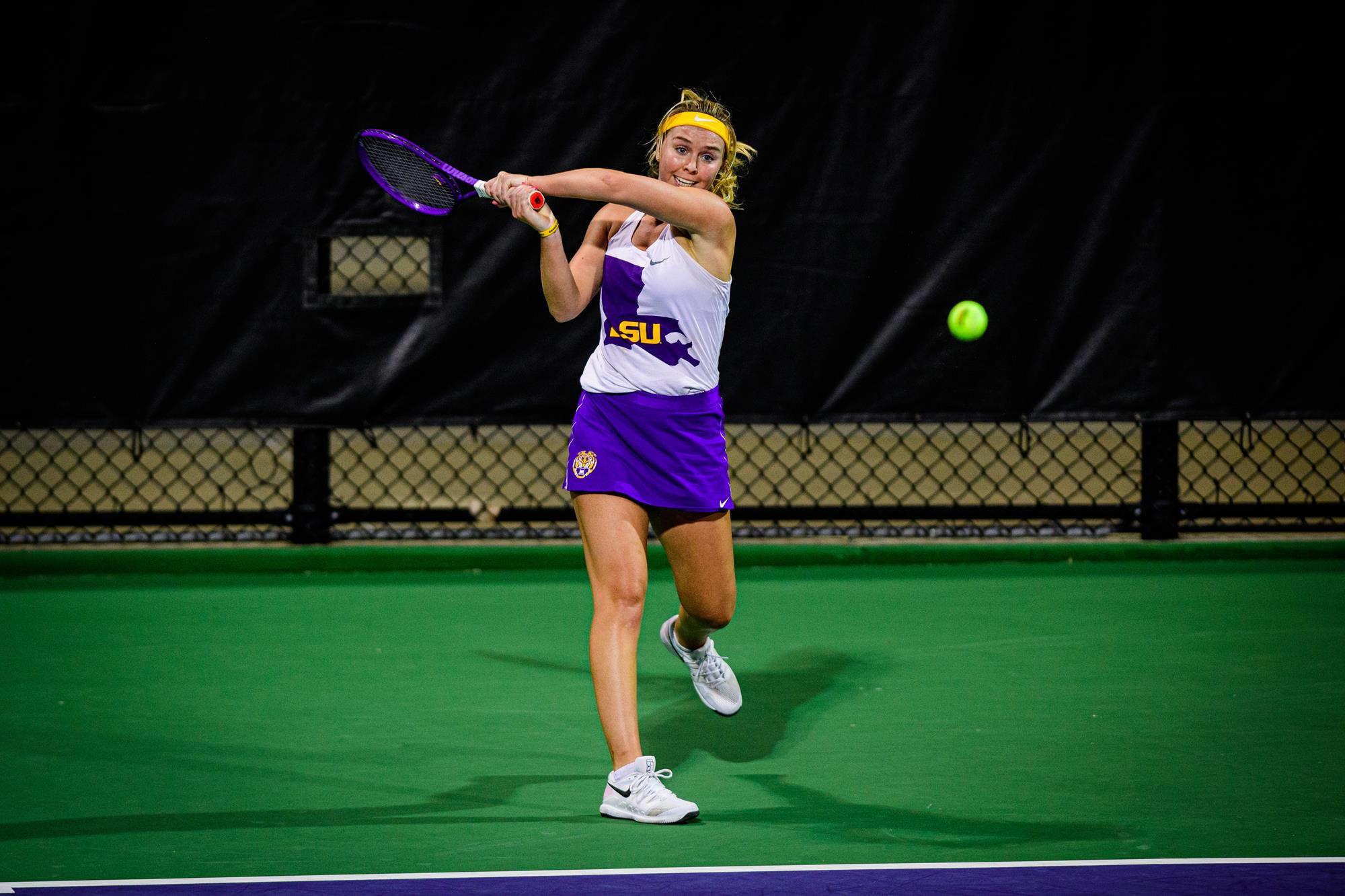 Auburn, Ala. – Senior Eden Richardson played hero for the second consecutive match at the No. 5 singles as she clinched a 4-3 victory for the No. 14 LSU Women’s Tennis team over the No. 20 Auburn Tigers on Saturday afternoon at the Yarbrough Tennis Center.

Selling Points
“World Class effort and determination to get a huge road win,” co-head coach Michael Sell said. “We were down 3-2 during the match and our seniors really showed their leadership and experience by clutching up for us and getting the win. Safiya (Carrington) and Samantha (Buyckx) played extremely well all weekend and continue to improve their standards.”

“We’re happy to be taking a Top 25 win back to Baton Rouge and will enjoy it before we conclude the regular season at home against two more tough opponents.”

Auburn’s Yu Chen and Anastasia Astakhova were the first duo off the doubles court, defeating Richardson and junior Anna Loughlan by a score of 6-3 at the No. 3 doubles.

The doubles point was clinched at the No. 1, where Georgie Axon and Adeline Flach defeated the No. 73-ranked duo of seniors Taylor Bridges and Paris Corley by a score of 6-2.

Freshman Samantha Buyckx grabbed LSU’s its first point of the afternoon with a win at the No. 6 singles, defeating Astakhova in straight sets. Buyckx claimed a close first set by a score of 6-4 before only dropping one game in the second to win 6-1 and get her ninth singles win of the season.

LSU took a 2-1 lead thanks to No. 84-ranked sophomore Safiya Carrington grabbing a win at the No. 2 over No. 100 Chen. Carrington was in control from the start, opening with a 6-3 win in the first set. Carrington kept pace in the second set, repeating the 6-3 scoreline to get her tenth win of the season and break into double digit singles win.

Auburn tied it up at 2-2 after Axon claimed victory over sophomore Nina Geissler at the No. 4. Axon claimed the first set by a score of 6-3 before carrying momentum to the second, winning all but one game in a 6-1 win.

At the No. 1, No. 62 Selin Ovunc put Auburn back into the lead at 3-2 with a straight set win over No. 50 Bridges. The first set was a tight contest, with neither player able to break away from one other until Ovunc won the final two games to take a 7-5 victory. In the second set, Ovunc took an early lead and didn’t look back on her way to a 6-1 win.

The Purple & Gold tied it up at 3-3 after No. 40 Corley defeated Carolyn Ansari. Corley and Ansari’s first set was back and forth, with Corley able to pull away at the end and win 7-5 before Ansari struck back with a 6-4 victory of her own in the second set to force a deciding third set. In the third set, Corley recovered from her second set defeat and emphatically blanked Ansari to win 6-0 and collect her team-high 15th win of the 2020-21 season.

The match came down to the No. 5, where Richardson faced Flach. Flach got off a great start, defeating Richardson 6-3 in the first set. The second set saw Flach and Richardson trade games, with not much separating the two and eventually going down to a tiebreaker. Richardson swung the tide in her favor in the tiebreaker, blanking Flach 7-0 and forcing a third set. In the third set, Richardson took an early lead and held off a late surge from Flach to win 6-3 and clinch the second consecutive match victory for LSU.

No. 14 LSU is set to conclude the regular season with a pair of home matches, beginning with Arkansas at 5 p.m. CT on Thursday, April 8.