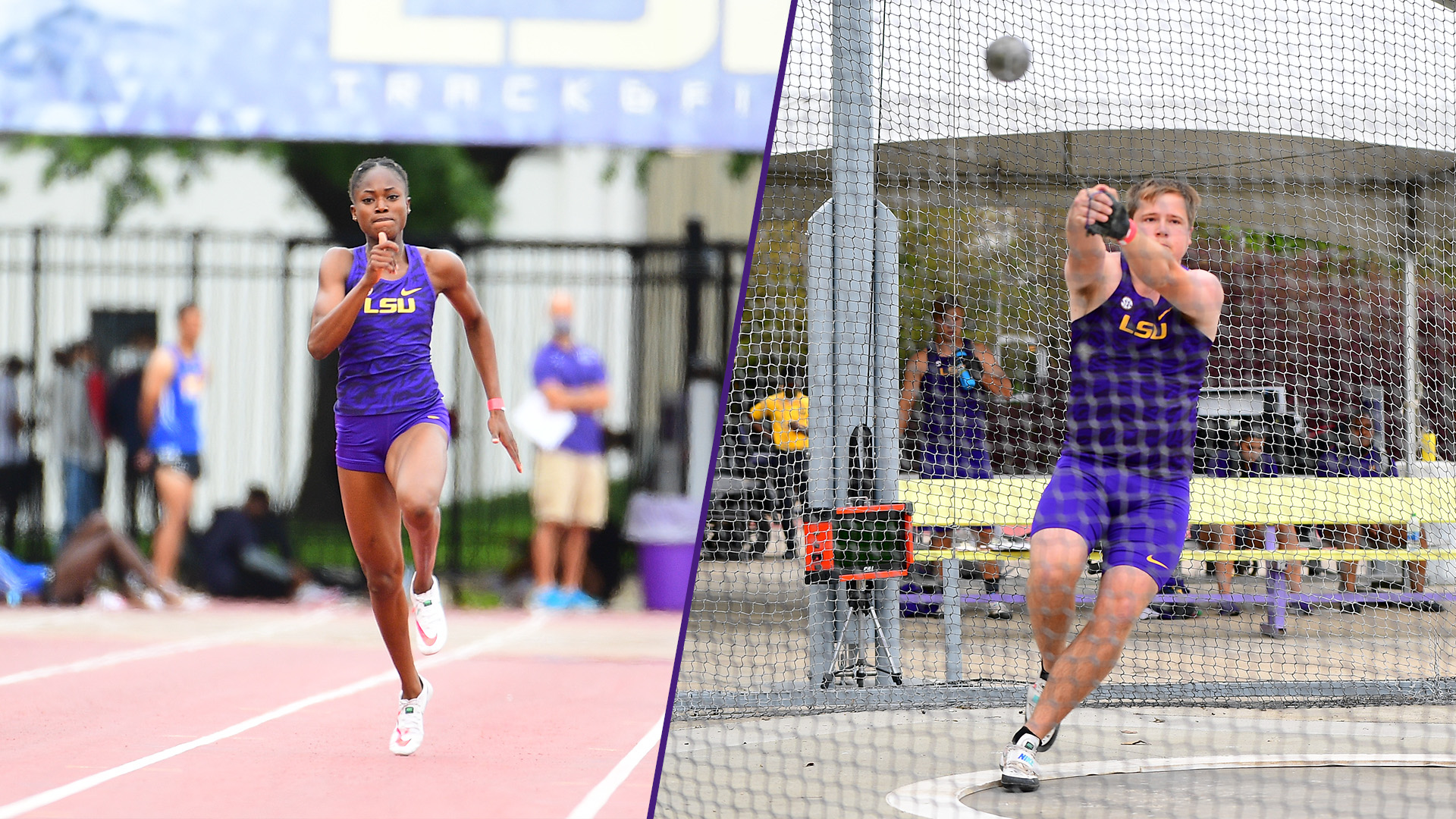 Baton Rouge, La.  –  The nationally No. 1 ranked LSU women’s and men’s track and field teams combined to win 20 event titles on Saturday at Bernie Moore Track Stadium as the Tigers hosted the Battle on the Bayou. Favour Ofili (200 meters) and Jake Norris (hammer throw) notched NCAA leads in their respective events to headline the action.

Ofili ran the fastest 200 meter time of her career with a 22.69 that leads the NCAA currently. It won her the event, made her the seventh fastest Nigerian in history over the distance of 200 meters, and was a Battle on the Bayou meet record. Norris collected a season best with a hammer throw of 237′ 3″ (72.31 meters) on his second attempt of the day to move into the NCAA lead. Both Norris and Ofili won event titles.

LSU had three other athletes collect NCAA top 10 marks on the day; Noah Williams (200 meters), Rayvon Grey (long jump), and Sean ‘Squirrel’ Burrell (400 meter hurdles) were the athletes to do so. Williams, a member of The Bowerman Watch List, ran a windy 20.28 in the 200 meters with a helping with of 3.8 m/s to win the event and rank third nationally. Grey, a 2019 NCAA indoor champion, won his first event title of the season with an outdoor personal best of 25′ 11″ (7.90 meters) which ranks No. 5 nationally. Burrell made his debut over the 400 meter hurdles with a time of 50.83 to win the event and rank No. 8 in the NCAA.

It was all LSU in the hurdling events as the Tigers won swept all four possible event titles. It started with freshman Leah Phillips winning the first collegiate race of her career with a time of 13.54 on the women’s side. Arthur Price III won the men’s 110 meter hurdles with a season best of 14.10, and then Brittley Humphrey (57.63) won the women’s 400 meter hurdles. The aforementioned Burrell was the fourth winner.

Former LSU sprinter Aleia Hobbs broke the meet record with a time of 10.99 seconds to win the 100 meter dash on the women’s side. She becomes the first woman in 2021 to go sub 11 seconds in the 100 meters.

LSU will head to Tuscaloosa, Alabama, for the Crimson Tide Invitational April 9-10.