No. 3 LSU Beach Drops Two Matches at No. 4 UCLA 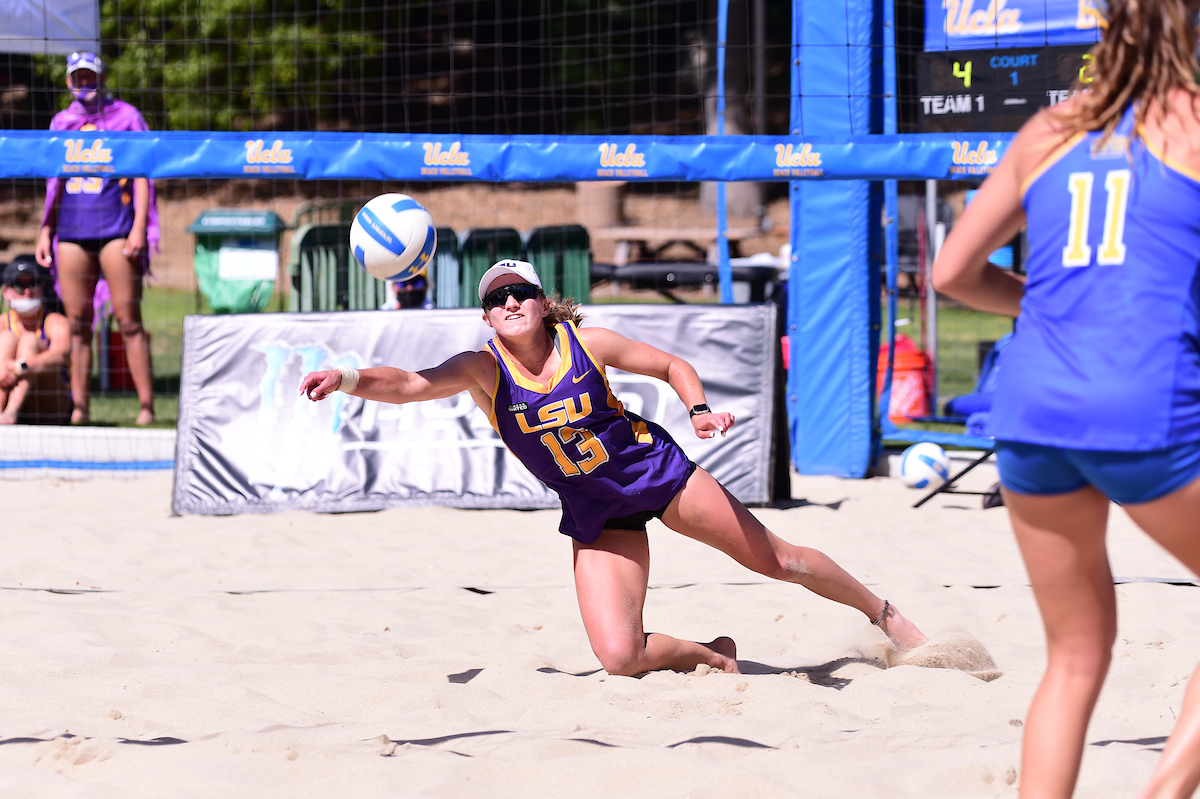 LOS ANGELES – The No. 3 LSU Beach Volleyball dropped two matches against No. 4 UCLA Saturday at Mapes Beach. LSU dropped the first match 4-1 and picked up a court in the second match, but still fell, 3-2.

“We know that when you play really good teams,” head coach Russell Brock said, “you can’t give away points. There is zero doubt that in these tight matches that didn’t go our way – you could count the points that we gave away and if we had any of those, it would have went our way.”

LSU will meet with No. 1 USC, who went 1-1 on Saturday against No. 2 Florida State. The Tigers and Trojans will meet in a double-header at 1 p.m. CT and 3 p.m. with streaming for the matches available here.

“We get another big test tomorrow,” Brock said. “It’s one that we have to find a way not just to be better, but to be more consistent to give ourselves a shot.”

With all of Saturday’s competition completed, LSU’s Court 1 pair of Taryn Kloth and Kristen Nuss are the final unbeaten pair in the nation.

In the first of the two matches, LSU fell to UCLA, 4-1, but it was a bit closer than the score would make it seem. LSU fell in straight-sets in the first round of duals on Courts 2 and 4, but forced third sets on all the other three courts in the next round.

The Tigers struggled to get much momentum going on Courts 2 and 4. Jess Lansman and Sydney Moore fell on Court 4, 21-14 and 21-12. Claire Coppola and Kelli Greene-Agnew fell 21-17 in both sets.

In the second round of duals on Court 1, 3 and 5, the Tigers have their best comeback effort down 2-0. On Court 5, Olivia Ordonez and Kahlee York dropped the first set, 21-18. They responded in the second set though, 21-17, to force a third. UCLA would clinch the match as York and Ordonez fell, 15-10, in the deciding set. Ashlyn Rasnick-Pope and Toni Rodriguez fell in a tightly contested first set on Court 3, 25-23, before taking the second, 21-19. In the third set though, the LSU pair fell, 15-11.

In the meantime, on Court 1 Taryn Kloth and Kristen Nuss were in a heated battle. They started their third set against the defending Pac 12 pair of the week of Lexy Denaburg and Savy Simo before the third sets had begun on Courts 3 or 5, but did not wrap up until both of those courts were determined as the third set would turn into a marathon full of excitement.

Kloth and Nuss took the first set on Court 1 without much resistance, 21-14. From there, the two pairs were about as even as could be. The second set needed extra points and ultimately UCLA won, 25-23, to force a third. In the third it was back and forth all the way. After the score was tied at 15, LSU faced 12 match-point serves from UCLA and had only two of their own, but ultimately, Kloth and Nuss prevailed in the marathon third set, 27-25.

About an hour and a half later, the Tigers and Bruins went to battle for the second match of the day at Mapes Beach and both teams kept their lineups the same and LSU responded well after the earlier defeat.

“I think everybody played better in the second match which says a lot about our ability to make adjustments,” said Brock.

Lansman and Moore fell once again on Court 4, 21-18 and 21-14. Coppola and Greene-Agnew flipped their fortunes though on Court 2 and after being swept earlier in the day, the LSU duo earned a straight-set win of their own, 21-16 and 22-20, evening the match at one dual a piece.

Kloth and Nuss stayed unbeaten on the season with a less dramatic win than earlier in the day, winning in straight-sets, 24-22 and 21-14, to give LSU a 2-1 edge in the match. After USC’s Tina Graudina and Sammy Slater fell to FSU this afternoon, Kloth and Nuss are the only undefeated pair in the nation remaining. They will meet Graudina, a qualified olympian, and Slater, and All-American, tomorrow at USC.