Lindblad Heads to Final Round of Augusta National Women's Amateur 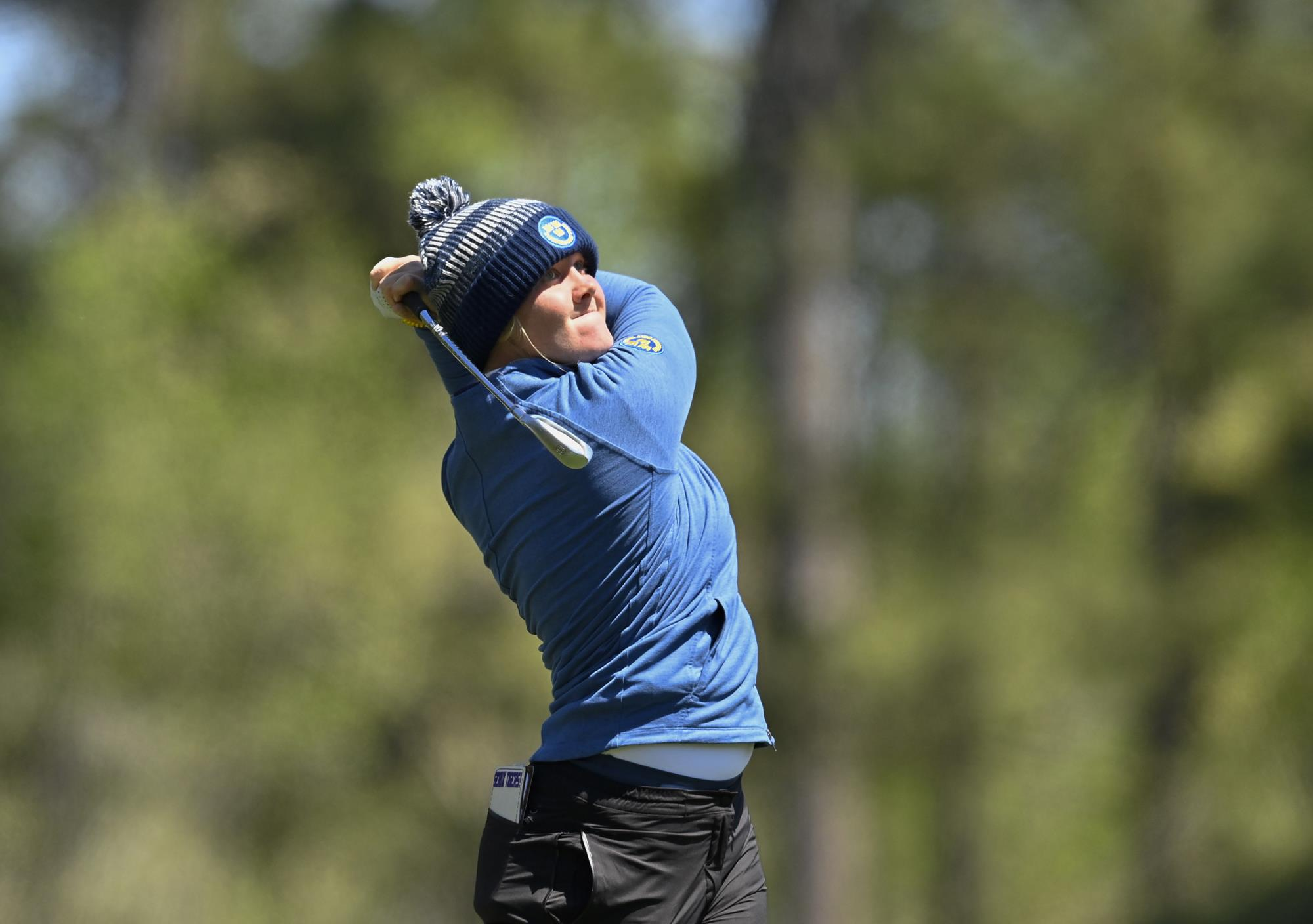 What is on the mind of the world’s No. 4 amateur is one thing – a title win.

Lindblad rallied from a near disastrous double-bogey on the ninth hole in Thursday’s second round, to post a 5-under 31 on the second nine holes and grab a share of the 36-hole lead at one-under par 143 (73-70).

She will be paired with the No. 1 amateur in the world rankings, Rose Zhang of California, who won the 2020 U.S. Women’s Amateur. Zhang had rounds of 71-72 for her 143 total. The Augusta National course will be setup to play at approximately 6,360 yards and its normal par of 72.

The pair will tee off looking for one of golf’s newest but most prestigious crowns at 9:20 a.m. CDT. The final round will be nationally televised on NBC beginning at 11 a.m.

Mike Tirico will call the television action from the 18th tower with analysts Paige Mackenzie and Trevor Immelman.

Lindblad’s impressions of the Augusta National course seemed to mirror or thoughts of the first two rounds at Champions Retreat. “I feel like it’s a little similar,” she said Friday. “The greens are — as Champions Retreat, the greens are pretty firm. You need to land the ball before the pin and let it roll

out. There’s a lot of — I’ve never been here before, so I was a little shocked by the elevation on almost every hole. So, I just tried to get some good elevation in the yardage book. But it was fun out there (Friday). Some of the holes, they look long in the yardage book, but then you get there and it’s a lot downhill, so, it’s fine.

“You need to hit the fairway because if you’re outside the fairway, it’s trouble. And then if you can get a couple of good looks and make a few putts, I mean, that would be awesome. I feel like you need a few birdies out here because you’re going to make both bogeys and birdies.”

In the group behind the leaders is Austin Kim, a junior at Vanderbilt from St. Augustine, Florida, and Olivia Mehaffey from Northern Ireland. Both are at even par 144. Seven golfers are within three shots of the lead.

Lindblad will be familiar with her playing partner in this pairing of 1 vs. 4.

“Year, I played Junior Ryder Cup with her,” Lindblad recalled. “Actually, all three matches against her. So, it is kind of fun to play like with her instead of – well, we still play against each other but at that time it was Europe against the U.S. So, it’s a little different now.”

Besides the possibility of a big day for LSU women’s golf, it could be a big day for Swedish golf as Lindblad is one of four Swedes to make the cut to the final 30 players for the last round of the tournament.

‘They have done great things for a couple years now and we have a bunch of great players and we still have players coming,” Lindblad, from Halmstad, Sweden, said of her homeland. “They try to include players who are not on the national team, so they still do things for them and invite them for tournaments and camps and stuff.”

Those who have played the Masters many times talk about the nerves on the first team. Lindblad knows that those nerves will have to be overcome when she steps on the course Saturday morning.

“It’s going to be a little nervous,” she admitted. “I don’t feel like it’s the easiest tee shot on one either, so just trying to get a good target and swing with confidence.”

Two nine-hole stretches played as well as the second nine on Thursday could be just the ticket to bring a prestigious trophy back to Baton Rouge.