Gymnastics Advances to Second Round of NCAA Regional 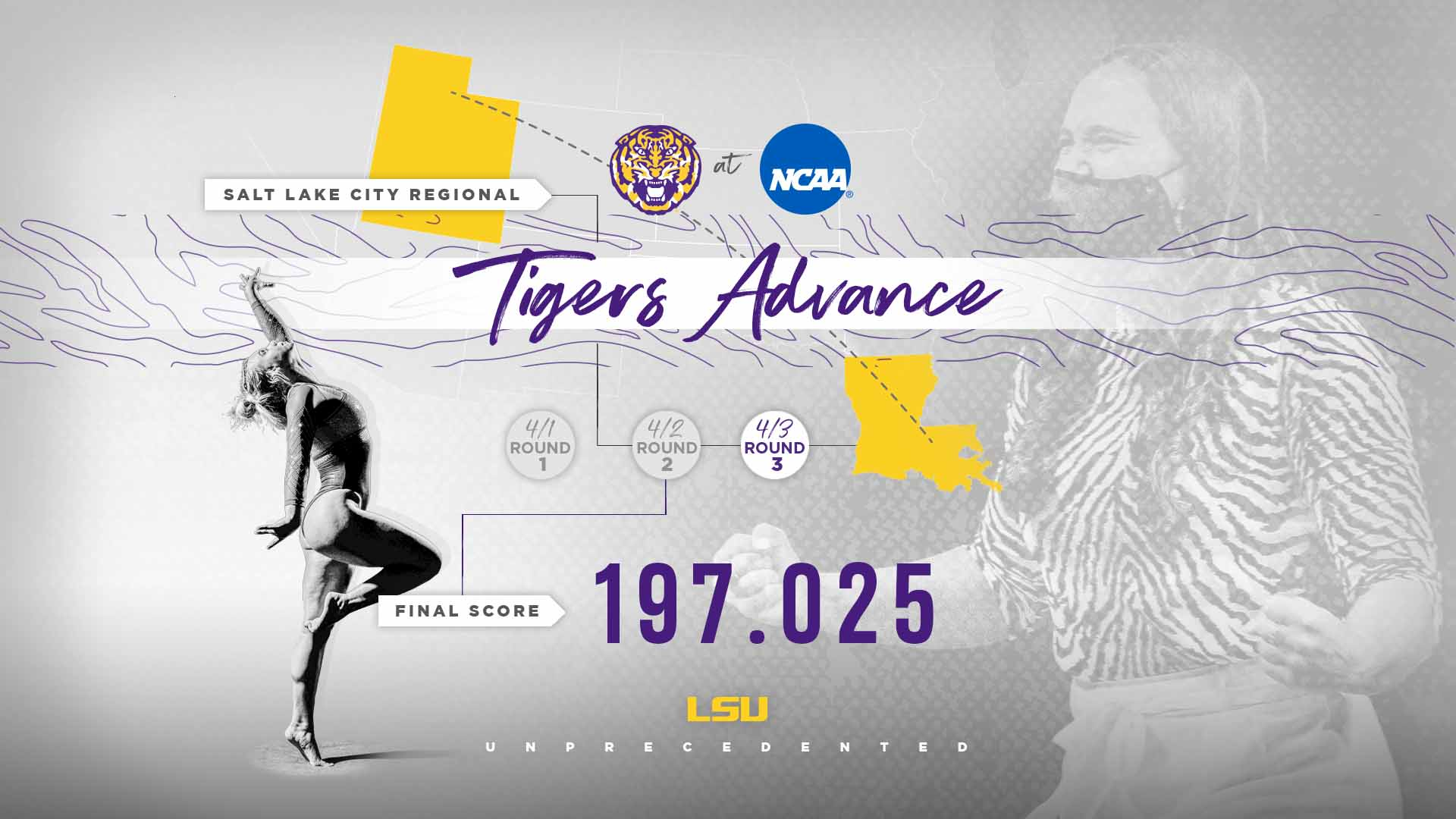 SALT LAKE CITY – The third-ranked LSU gymnastics team fought to the final routine of the night to score a 197.025 and advance to the second round of the NCAA Salt Lake City Regional, Saturday night at the Maverik Center.

LSU finished second in the meet and will face off against No. 6 Utah, No. 11 Arizona State and No. 14 Kentucky in the regional final. The top two teams will advance to NCAA Championships in Fort Worth, Texas. The Tigers will rotate floor, vault, bars and finish on beam.

“We really put ourselves into a hole today, but I am proud of the way they fought” head coach Jay Clark said. “The point is to survive and advance and that is what we did. There were some really big routines across the board tonight. We just need to refocus and get our rest before tomorrow night. I have full confidence in this team to reset and do what we need to do.”

Sophomore Kiya Johnson carried the team to the finish line with a 39.700 all-around score. She won the vault and floor titles with a 9.95. Freshman Haleigh Bryant shared the vault title with her 9.95. Seniors Reagan Campbell and Sami Durante also delivered monstrous routines in anchor performances of beam and bars and earned a 9.925 and 9.95 respectively.

Back Half of Beam Lineup Holds Steady
LSU did not get off on the right foot and trailed after one rotation after scoring a 48.700. Christina Desiderio opened the meet with a 9.80. There was a fall in the second spot of the lineup and Haleigh Bryant scored a 9.225. The final three in the lineup righted the ship. Bridget Dean scored a 9.85, Johnson earned a 9.90 and Campbell anchored with a 9.925.

Floor Begins Comeback with 49.350
The comeback began at the halfway point of the meet. Desiderio and Alyona Shchennikova started things off with a 9.875. The Tigers counted a 9.75 from Sierra Ballard and followed with a 9.90 from Sarah Edwards. Johnson anchored with a 9.95.

Vault Lineup Lights Up
The Tigers moved into second place after a 49.525, which marked the third highest at an NCAA Regional and the best regional score away from Baton Rouge. Chase Brock led off with a career high 9.90 and Shchennikova followed with a 9.85. Edwards totaled a 9.875 and Johnson and Edwards anchored with scores of 9.95.

Bars Scores Highest at an NCAA Regional to Move On
The squad clinched their spot in the regional final with a 49.450 for the highest in school history. Johnson led off the rotation with a 9.90. Olivia Dunne posted a 9.825 and Bryant scored a 9.90. in the final two performances, Shchennikova scored a 9.875 and Durante earned the 9.95 to advance.