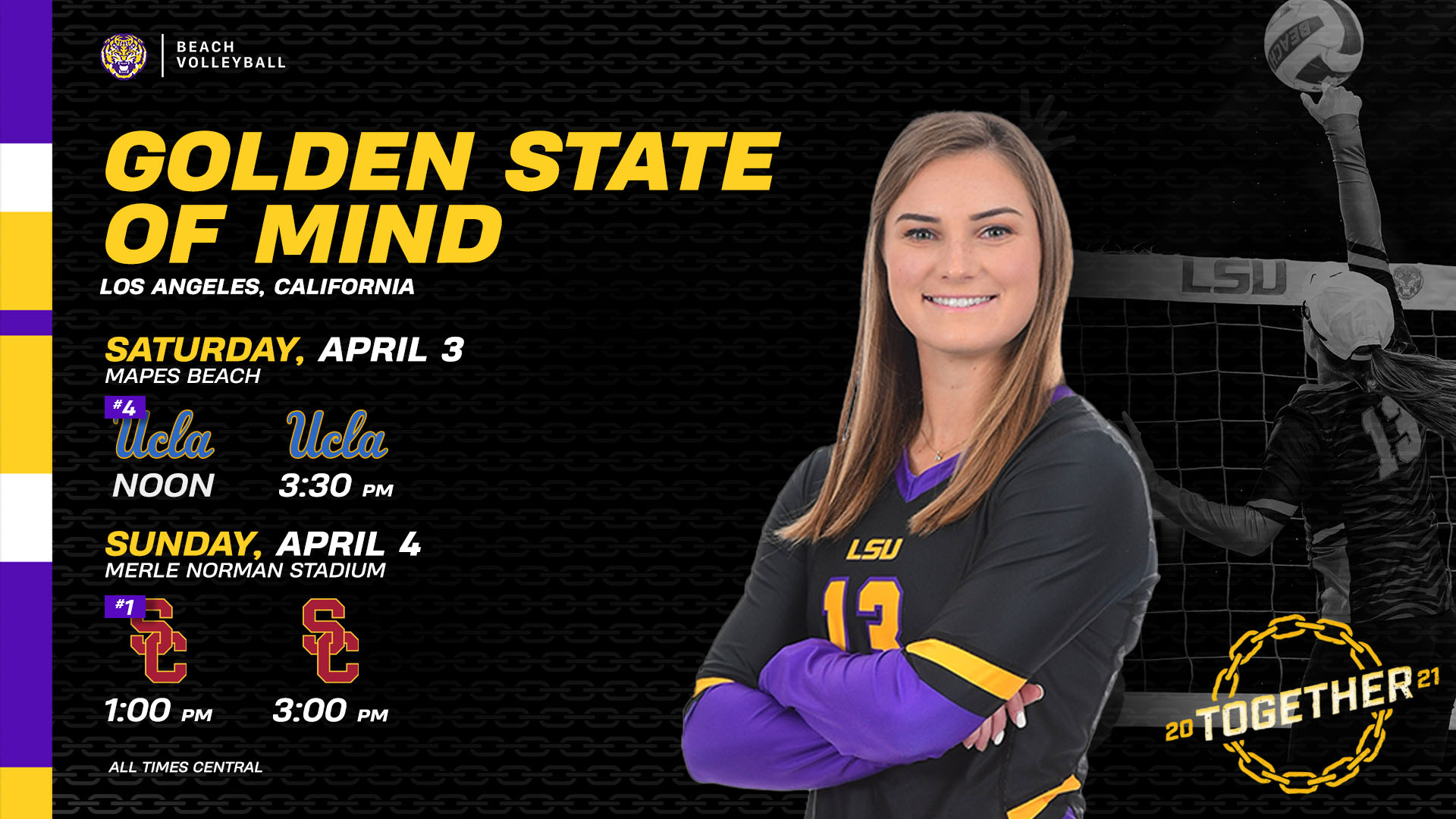 LOS ANGELES – After a bye week, the No. 3 LSU Beach Volleyball team has a crucial weekend of competition ahead as it is set to face No. 4 UCLA in a Saturday double-header and No. 1 USC in a Sunday double-header on the West Coast.

“We’re looking to go toe-to-toe with whoever will get in the sand with us and those two programs are historic and traditionally powerful,” said coach Russell Brock. “We love to mix it up in that environment.”

Saturday’s matches will take place at Mapes Beach on UCLA’s campus at Noon CT and 3:30 p.m. The matches on Sunday will be on USC’s campus at Merle Norman Stadium at 1 p.m. and 3 p.m. The Tigers had workouts at both facilities on Friday ahead of competing at them for the first time ever.

“Historically we’ve built LSU Beach Volleyball to compete against teams that are big, physical, knowledgeable, that play the game really well, are disciplined and have great defenses,” said Brock. “That’s what we’ve built our team to play against.”

Not only will the Tigers be making the trip west, but the East Region’s other top team, No. 2 Florida State, will also make its way to Los Angeles. The Seminoles have double-header matches against USC on Saturday and UCLA on Sunday.

LSU (16-2), Florida State (21-0), UCLA (11-1) and USC (12-0) have been the top-four teams in the AVCA for the entire season and have solidified themselves as the four front runners to compete for the National Championship next month in Gulf Shores.

The Tigers two losses have come against Florida State, but LSU has won eight in a row with a large opportunity looming ahead in California.

UCLA will be hungry against LSU since the Tigers have won the last two matches against the Bruins. The teams played three times last season. They split a set of matches in Hawaii during the season’s opening weekend before UCLA came to Baton Rouge and fell to LSU.

This will be just the fifth meeting between LSU and USC. The Women of Troy own a 3-1 record over the Tigers and have won the past two meetings, most recently in Gulf Shores during the 2019 National Championship Tournament.

Taryn Kloth and Kristen Nuss have been the top pair for LSU this year with an 18-0 record on Court 1. Both Kloth and Nuss have large win streaks, at 32 and 30 respectively, heading into the weekend that date back to last season when both of them had different partners.

Kloth and Nuss will likely put their undefeated Court 1 record on the line against UCLA’s Lexy Denaburg/Savy Simo, the reigning Pac-12 Pair of the Week. Depending on Saturday’s results, Sunday could feature the only two remaining undefeated pairs in the nation as Kloth and Nuss will square off against USC’s Tina Graudina and Sammy Slater. Graudina took a redshirt year in 2020 to train and ultimately earn a berth in the Olympics and Slater is an All-American.

“Who wouldn’t want to play against some of the best competition,” Nuss said. “I think that’s what all athletes want – you want the best. I think it will be a great challenge for us and we’re really looking forward to getting out there and competing against them.

LSU has had success on the other four courts as well. Olivia Ordonez and Kahlee York have been solid for the Tigers on Court 5 with a 13-2 record together. On Court 4, Jess Lansman and Sydney Moore have gone 10-3 and have won five straight. Ashlyn Rasnick-Pope and Toni Rodriguez have excelled to a 16-2 Court 3 record. Claire Coppola and Kelli Greene-Agnew have gone 10-4 on Court 2.