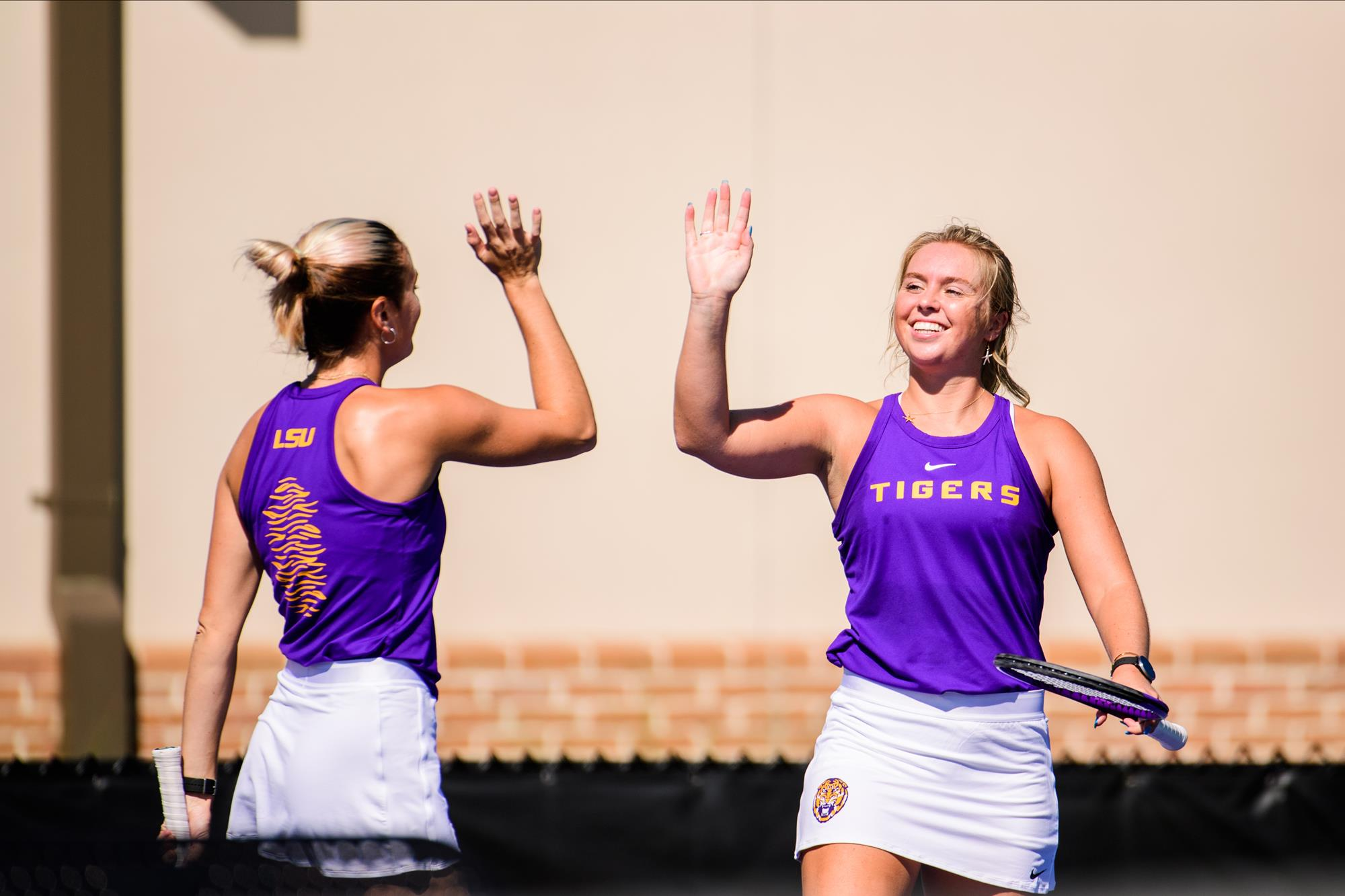 Tuscaloosa, Ala. – Senior Eden Richardson clinched the No. 12 LSU Women’s Tennis team its fifth sweep of the season as the Tigers secured a 4-0 win against the Alabama Crimson Tide on Thursday afternoon at the University of Alabama Tennis Stadium.

Selling Points
“Dominant and gutsy performance by the Tigers on the road today,” co-head coach Michael Sell said. “We changed our doubles rotation up with not much practice so we’re very thrilled to have gotten the doubles point. We then put big scoreboard pressure on them early in singles and kept it going after that.”

“We’re thrilled for Eden to have earned the clinch and also very happy with the singles performances from Safiya (Carrington) and Samantha (Buyckx). It’s never easy to win 4-0 in the SEC so we’ll enjoy this but then turn our focus to another Top 25 opponent in Auburn on Saturday.”

The Crimson Tide grabbed the first doubles court of the afternoon at the No. 2 when Anne Marie Hiser and Sydney Riley defeated sophomores Safiya Carrington and Nina Geissler by a score of 6-3.

LSU drew level by claiming the No. 3, where the English duo of Richardson and junior Anna Loughlan held off a late charge from Anna Parkhomenko and Alba Cortina Pou to win 6-4 and claim their third win as a duo on the year.

The Tigers clinched the doubles point at the No. 1, where the No. 73-ranked duo of seniors Taylor Bridges and Paris Corley won a close contest against the No. 49 duo of Moka Ito and Loudmilla Bencheikh. The two teams went back and forth, with neither able to pull ahead from their opponent. Bridges and Corley were able to tie it up at 5-5 and went on to win the next two games to win 7-5 and secure their tenth win as a doubles duo in the dual season.

No. 84 Carrington dealt the first blow in singles play with a straight set win at the No. 2 over Ito. Carrington made quick work of Ito in the first set, winning 6-2 and going on to repeat the feat in the second to get her ninth singles win of the season.

Freshman Samantha Buyckx made it 3-0 on the afternoon for the Tigers at No. 6 with her fifth straight set win of the season over Sasha Gorchanyuk. Buyckx started the match in strong fashion, winning the first set by a 6-2 margin. The second set saw Buyckx only drop one game on her way to a 6-1 win to get her seventh singles win of the year.

At the No. 5, Richardson clinched LSU’s 11th win of the season with a straight set victory over Hiser. The first set was closely contested, with Richardson able to squeeze out a narrow 6-4 win. In the second set, the two traded games between one another until Hiser took a 5-4 lead late in the match. Richardson responded by winning the next three games to get a 7-5 win and give the Purple & Gold the match victory.

No. 14 LSU will conclude the road stretch when they take on No. 20 Auburn at noon CT on Saturday, April 3.