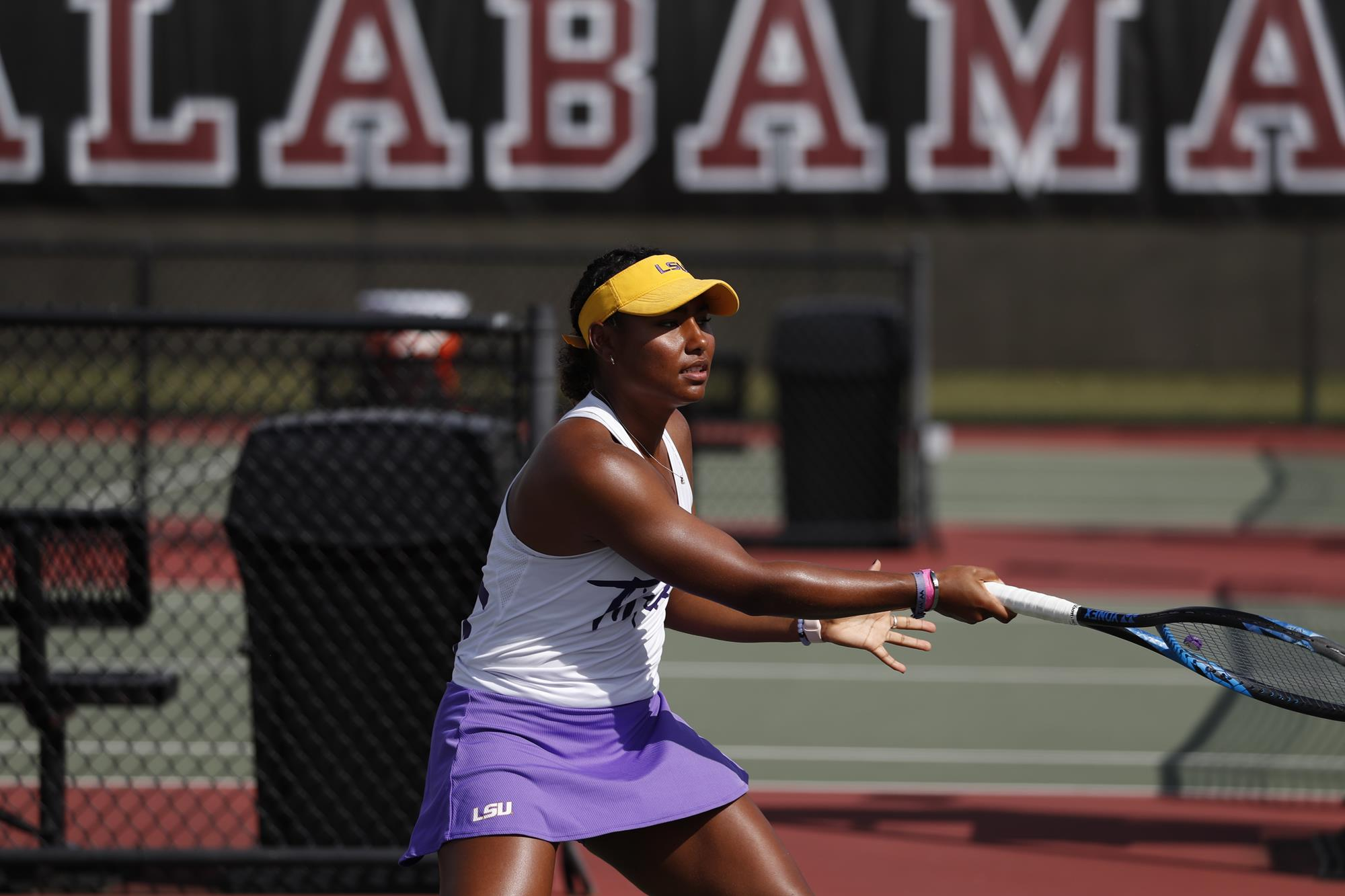 Tuscaloosa, Ala. – The No. 14 LSU Women’s Tennis team (10-4, 5-4 SEC) is set to play their final road matches of the regular season, beginning with a match against the Alabama Crimson Tide at the University of Alabama Tennis Stadium at 1 p.m. CT on Thursday, April 1st before concluding the stretch against the No. 20 Auburn Tigers at the Yarbrough Tennis Center at noon CT on Saturday, April 3rd.

LSU and Alabama will meet for the 49th time on Thursday, with the Tigers holding a 33-15 advantage in the series. When the teams last met in the second round of the SEC Tournament in 2019, the Tigers defeated the Crimson Tide by a score of 4-3 to advance to the quarterfinals.

Alabama boasts an 11-8 overall record and a 2-7 record in SEC play heading into the match up. The Crimson Tide come in fresh off their first Top 25 win of the season after defeating then-No. 22 Arkansas on the road in a 4-3 contest.

The Crimson Tide are led in the dual season by Alba Cortina Pou, who leads the team in dual wins with a 13-2 record. In doubles, the duo of Anne Marie Hiser and Sydney Riley have had the most success, notching an 11-2 record in the dual season play at the No. 1 and 2 doubles spot.

The two Tigers have met 43 times over the programs’ histories, with LSU having a 29-14 lead in the series. When the teams last met in 2019 at the LSU Tennis Complex, LSU strongly defeated Auburn by a score of 4-1.

No. 20 Auburn comes into the weekend with a 12-3 overall record and 7-2 record in SEC play, boasting impressive conference wins over Arkansas, Florida, and South Carolina.

Auburn has two players ranked in the latest ITA national rankings, with Selin Ovunc ranked at No. 62 and Yu Chen ranked No. 100. Ovunc and Chen have played at the No. 1 and 2 singles spot respectively for the Tigers, with Ovunc sitting at 11-7 overall and Chen at 12-8. Georgie Axen has been a force for Auburn this season playing at the No. 4, earning a 13-1 record with her only loss of the dual season coming in her first match.

In LSU’s lone match last weekend, the visiting Tigers fell to then-No. 20 Texas A&M by a score of 4-0.

Seniors Taylor Bridges and Paris Corley have led the Tigers this season in singles play. In the latest Oracle/ITA Singles Rankings, Corley’s strong season of singles play thus far saw her move up to No. 40. Corley has earned a 6-3 record in dual play while playing primarily at the No. 3 singles spot for the Tigers; Overall, Corley’s 14-4 record sees her currently lead the team in singles wins.

Bridges moved up to No. 50 in this week’s rankings update. Playing at the No. 1 spot for the Tigers, Bridges has tallied a 7-5 record in dual play and sits second on the team in overall singles wins with a 13-7 record, three of which came against ranked opponents.

Sophomore Safiya Carrington rounds out the Tigers ranked in singles, moving up to No. 84. Carrington has notched four wins in dual play for the Tigers, and eight overall in the 2020-21 season.

In doubles, senior Eden Richardson and sophomore Nina Geissler represent the team at No. 72. The duo has grabbed four wins playing at the No. 1 spot, including two wins over ranked duos. The usual two are joined by Bridges and Corley, whose 9-2 record in the dual season sees them debut at No. 73 in the doubles rankings.