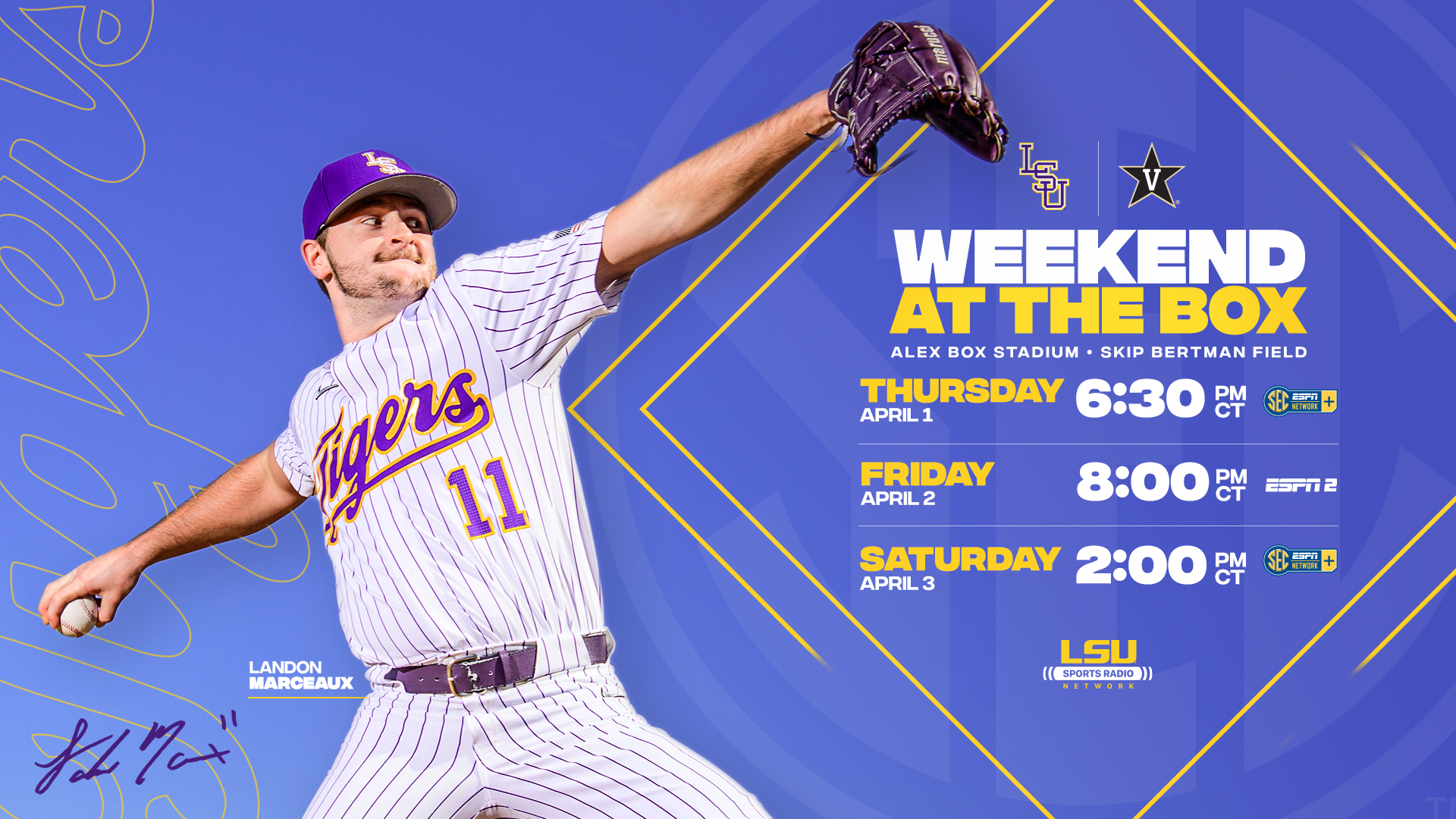 SERIES RECORD VS. VANDERBILT
LSU has a 58-44 series edge over Vanderbilt, and Thursday’s game will mark the 103rd meeting between the schools in a series that began in 1954. The teams are meeting for the first time since May 25, 2019, when the Commodores defeated the Tigers in the semifinals of the SEC Tournament in Hoover, Ala. This week’s series marks the first regular-season meeting between the clubs since March 3-25, 2018, in Nashville, when Vanderbilt won two of three games over the Tigers. Vanderbilt has won seven of the past eight regular-season series between the schools; however, LSU has a 6-2 all-time mark against Vanderbilt in SEC Tournament games.

QUOTING PAUL MAINIERI
“Rocker and Leiter are great pitchers for Vanderbilt, but they’re not the only two good arms they’ve got, believe me. They’ve got a whole slew of guys, and they’ve got great players at every position. It’s going to be a tremendous challenge for our players, but this is the SEC. Any player on our team that’s worth his salt is looking forward to this kind of challenge. We’re expecting the wind to be blowing in this week, so it’s going to be hard on the hitters for both teams, and I like our pitchers, too. I imagine we won’t see high-scoring games – defense, big pitches and situational hitting are going to be huge.”

ABOUT THE TIGERS
•    LSU junior right-hander Landon Marceaux saw his streak of 33.2 straight innings without allowing an earned run end in Friday’s game at Tennessee … Marceaux, whose streak began during his final appearance of the 2020 season, pitched five innings on Friday and gave up two runs – one earned –  on three hits with three walks and nine strikeouts … Marceaux has a 0.26 ERA this season in 35 innings with nine walks and 44 strikeouts, and he’s limiting opponents to a .144 batting average; he is No. 2 in the SEC in ERA, No. 4 in opponent batting average and No. 10 in strikeouts.
•    Junior right-hander AJ Labas delivered a quality start for LSU in Sunday’s game at Tennessee, working seven innings and allowing just two runs on four hits with two walks and three strikeouts.
•    Freshman first baseman Tre’ Morgan hit .429 (6-for-14) in the Tennessee series with three doubles, one homer, two RBI and three runs scored … Morgan collected a career-best five hits in last Saturday’s game, including three doubles and a homer … Morgan tied the LSU single-game record for doubles (3), which has been set on numerous occasions, the last time by Kramer Robertson versus Georgia on March 17, 2017 … Morgan is No. 2 in the SEC in runs scored (30) and in doubles (9), and he is No. 4 in stolen bases (8) and No. 10 in on-base percentage (.462).
•    Junior leftfielder Gavin Dugas launched two homers and drove in four runs in the Tennessee series – he is No. 4 in the SEC with 29 RBI on the year.
•    Freshman rightfielder Dylan Crews leads the SEC in base hits (38), runs scored (30) and he is No. 2 in total bases (68) … Crews is also No. 3 in home runs (8 – tied with LSU 3B Cade Doughty), No. 5 in on-base percentage (.483), No. 7 in slugging percentage (.680), No. 6 in walks (18) and No. 7 in stolen bases (7).
•    Sophomore third baseman Cade Doughty is No. 3 in the SEC in home runs (8 – tied with LSU RF Dylan Crews), No. 4 in RBI (29) and No. 5 in slugging percentage (.705).
•    LSU is No. 2 in the nation in home runs with 44 on the year; Arkansas is No. 1 with 45. Southern Illinois is No. 3 with 40, and Old Dominion, Vanderbilt and South Carolina are tied for fourth with 36 dingers.

ABOUT THE COMMODORES
•    Vanderbilt is No. 1 in the SEC in both team ERA (2.27) and in batting average (.313) … the Commodores are No. 4 in the nation with 36 home runs this season … the Commodores pitching staff is limiting opponents to a .172 batting average and averages 12.1 strikeouts per game.
•    Sophomore right-hander Jack Leiter leads the SEC in ERA (0.25), wins (6) and opponent batting average (.062) … he is No. 2 in the SEC in strikeouts with 59 … junior Kumar Rocker is tied with Leiter for the league lead in wins (6) … Rocker is No. 2 in opponent batting average (.129) and in innings pitched (37.0), and he’s No. 3 in strikeouts with 53.
•    Utility player Dominic Keegan leads the SEC with a .483 batting average, and he has nine doubles, two triples, six homers and 24 RBI … outfielder Isaiah Thomas is tied with Keegan for the team lead in homers with six … infielder Carter Young has five homers and 21 RBI, and infielder Jayson Gonzalez has four homers and 20 RBI.