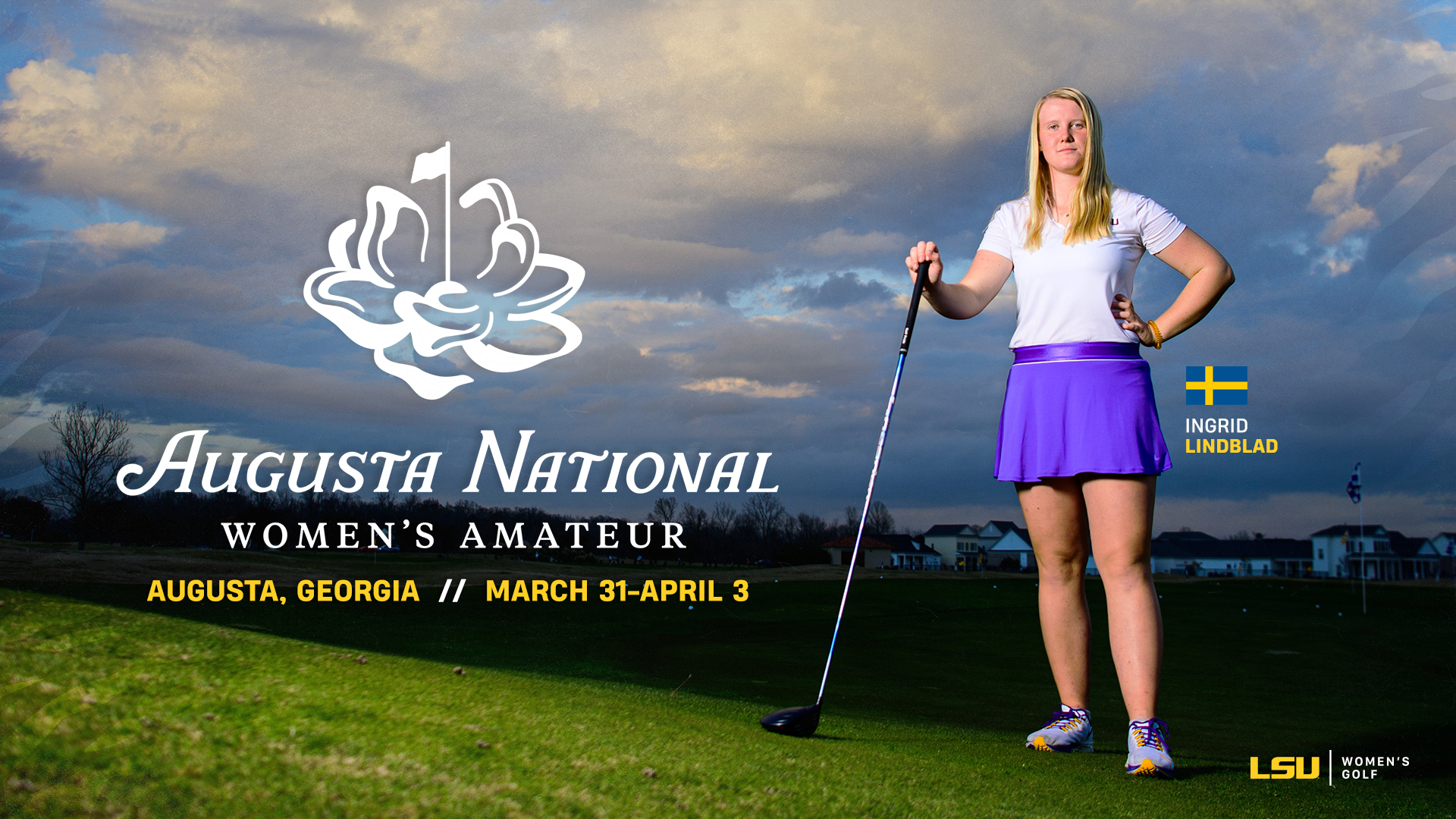 AUGUSTA, Georgia – Finally, the chance to play, in what even in its second year may be the greatest showcase of women’s amateur golf, has arrived for LSU sophomore Ingrid Lindblad.

And, after one of her best college triumphs in her last start at the prestigious Liz Murphey Intercollegiate at Athens, Georgia, who is to say that Augusta, Georgia wasn’t already on this Swedish star’s mind?

Wednesday, the nation’s number four amateur will be one of 82 golfers teeing off in the second women’s amateur championship inaugurated and sponsored by the Augusta National Golf Course, with the top 30 after 36 holes competing on the famed course.

Lindblad will go off in the 13th group of the morning at 8:57 a.m. CDT with Megha Ganne of the United States and Paula Schulz-Hanssen of Germany.

Ganne is from New Jersey and a four-time Drive, Chip and Putt finalist at Augusta, a 2019 U. S. Women’s Amateur semifinalist and a 2022 commitment for Stanford. Hanssen is the 202 European Ladies’ Amateur champion.

At his annual press conference at the 2018 Masters, Chairman Fred Ridley announced the creation of the Augusta National Women’s Amateur. Set for the week prior to The Masters, the event was designed to inspire greater interest and participation in women’s golf and create a new exciting pathway for these players to fulfill their dreams.

Jennifer Kupcho, the world’s top-ranked amateur, played her final six holes in five under par to become the champion of the inaugural ANWA in 2019 with a 54-hole total of 10-under par 206.

Lindblad was invited to play in the 2020 edition of the ANWA, but of course that event was canceled because of the pandemic. Unlike the Masters, which was moved to November, the women’s amateur was not rescheduled, but Lindblad was high on the invite list for this year’s event.

At the Liz Murphey earlier in March on the UGA course, which features its own version of the famed Augusta Amen Corner, Lindblad tied the school record for a single round with an 8-under par 64 and won with a 54-hole total of 4-under 212. It was Lindblad’s third win of her LSU career, and she is now tied for fourth in career wins for the Tigers.

“It was really cool tying the school record,” Lindblad said last week. “I knew I had to birdie the last two holes (both of which are par 5s). I’ve been wanting to shoot 64. I know I can shoot low. I was playing really good that day and my game was really working.”

Over the course of the last two years, Lindblad has seven wins overall, collegiately and in international events. More importantly, appearing on one of golf’s grandest stages will not be something new for the 20-year-old native of Halmstad, Sweden after a December that saw her participate in the United States Women’s Open and for the International team in the Palmer Cup.

Lindblad not only made the cut in Houston at the Champions Club at the Women’s Open, she also finished in a tie for 30th which included an under-par round of 69.

The SEC Player of the Year from 2020 has done nothing in her college golf 2020-21 season for the Tigers to hurt her chances to repeat with the win at the Liz Murphey and six other top-10 finishes, with no placing lower than ninth this season.

And, after the ANWA, she will quickly return to Baton Rouge and join her teammates in the annual LSU Tiger Golf Classic, scheduled for April 6-7 at the University Club as the event returns to the calendar for the first time since 2019.

“When people ask what makes her so good, all the skill sets are above average for her,” said LSU Women’s Head Coach Garrett Runion. “Most of it is her internal drive. Her internal drive can be great. She’s above average in distance which is a huge advantage. To break through that 65 barrier and shoot 64 should just open up the floodgates for her. I believe that really gives her a lot of confidence.”

The tournament opens on Wednesday with the first of two rounds at Champions Retreat Golf Club in Augusta. The course is intriguing in that three of the greatest to play the game – Arnold Palmer, Jack Nicklaus and Gary Player – all had a hand in designing nine-hole segments of the course. That trio has combined for 13 green jackets in their 147 Masters appearances.

The first two rounds will be played on Palmer’s Island nine for the opening nine holes, while Nicklaus’ Bluff course will be the second nine. The course will play to 6,445 yards.

All 82 contestants will get the chance to play at Augusta National on Friday, but the top 30 will be showcased on Saturday and compete for the championship with NBC devoting three hours of coverage. There will be a playoff after the second round Thursday if necessary to get down to the 30 number for Saturday’s final round. In 2019, there was an 11-player playoff for the final 10 spots for the final round.

Augusta National will be set up for a 6,365-yard layout.

A total of 25 different countries are represented in this year’s field with 35 colleges and universities sending players to the event.

Since the legendary golfer Bobby Jones and Clifford Roberts founded Augusta National back in the 1930s and began the tournament that became The Masters, there has always been a sense of belonging to the top amateurs in the game that are invited each year.

Now the Augusta National Women’s Amateur has taken that to a whole new dimension, showcasing the young stars of women’s golf on a national platform. Many of the names on the leaderboard at Augusta National this weekend will probably be the same ones which golf fans will see on LPGA leaderboards in the years to come.

But the future right now deals with just one thing for Lindblad. It’s just another golf event to succeed in.

“I feel like I should focus on my own game,” she said of playing in this event and facing the nation’s top amateurs. “You can’t worry about what other people are doing and what’s going on around you. You have to focus on yourself and just try to play your own game.”

The first two rounds are not televised but leaderboards and highlights will be available at ANWAGolf.com and on Twitter @ANWAGolf.