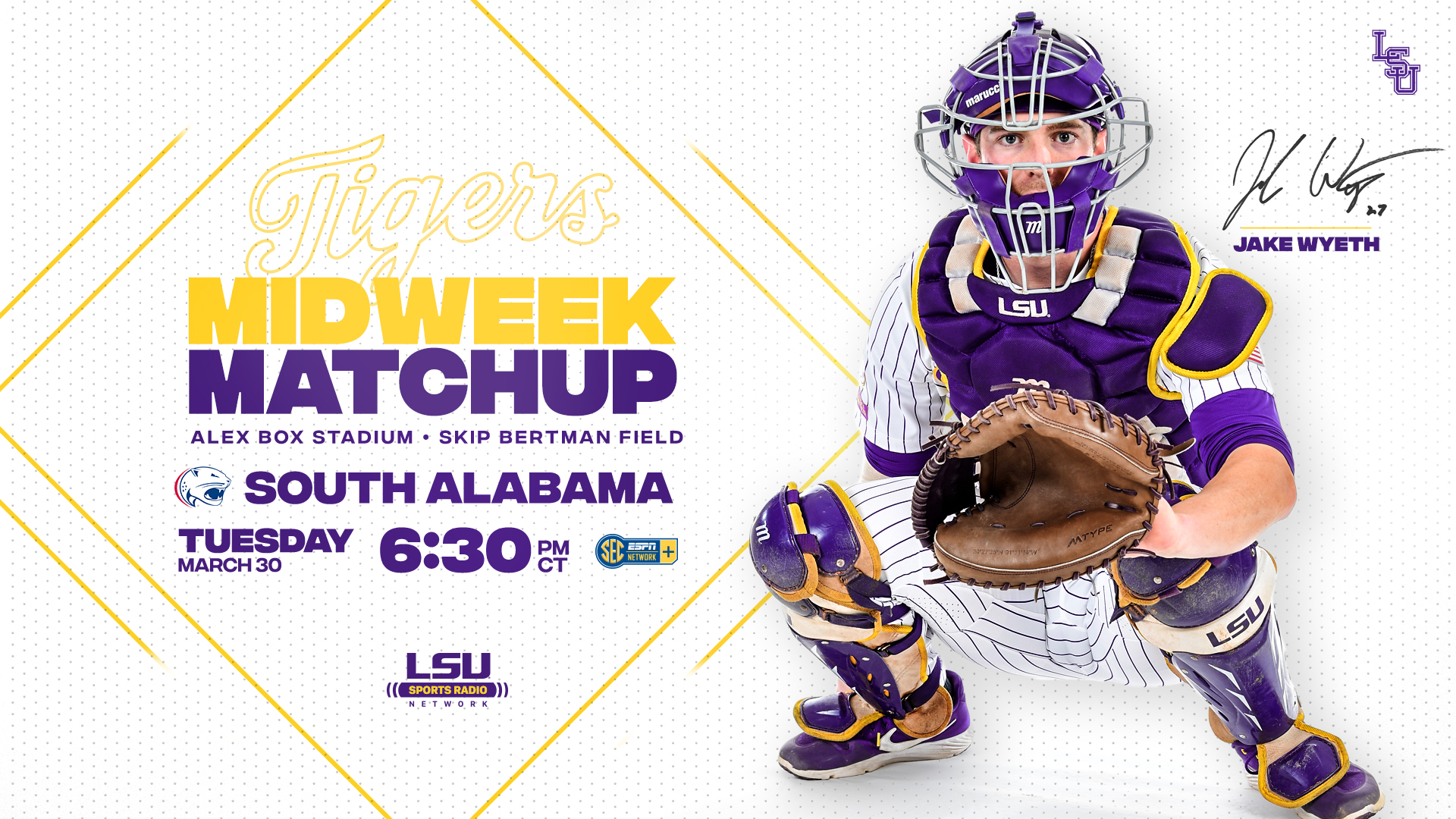 SERIES RECORD VS. SOUTH ALABAMA
•    Tuesday’s game marks the 44th meeting between LSU and South Alabama in a series that began in 1971 and USA leads, 25-18. The teams have met in each of the four previous seasons in Baton Rouge – South Alabama posted a 7-6 win over the Tigers in 2017, and LSU recorded 9-4, 2-0 and 4-1 wins over the Jaguars in the past three seasons.

•    The teams also met on March 19, 2014, in Baton Rouge when LSU recorded a 9-0 win over the Jaguars. The 2014 contest was the first meeting between the schools since the 1997 NCAA South I Regional in Baton Rouge, when the Tigers defeated the Jaguars twice on the regional’s final day to advance to the College World Series.

QUOTING PAUL MAINIERI
“We’ve got to be ready to go with four very tough ball games this week in a very short period of time. It’s a very big week for us, and we’ve to shake off last week’s Tennessee series very quickly. We face a very good South Alabama club on Tuesday night, then the No. 1 team in the country – Vanderbilt – comes in here on Thursday. That’s the nature of baseball; you’ve got to put what’s happened in the past behind you and get ready to go on to the next challenge. Traditionally, South Alabama has a great team, and (USA coach) Mark Calvi is an outstanding coach. So, they’re going to come here with a lot of confidence, and we’ve got to be ready to go.”

ABOUT THE TIGERS
•    LSU junior right-hander Landon Marceaux saw his streak of 33.2 straight innings without allowing an earned run end in Friday’s game at Tennessee … Marceaux, whose streak began during his final appearance of the 2020 season, pitched five innings on Friday and gave up two runs – one earned –  on three hits with three walks and nine strikeouts … Marceaux has a 0.26 ERA this season in 35 innings with nine walks and 44 strikeouts, and he’s limiting opponents to a .144 batting average; he is No. 2 in the SEC in ERA, No. 4 in opponent batting average and No. 9 in strikeouts.
•    Junior right-hander AJ Labas delivered a quality start for LSU in Sunday’s game at Tennessee, working seven innings and allowing just two runs on four hits with two walks and three strikeouts.
•    freshman first baseman Tre’ Morgan hit .429 (6-for-14) in the Tennessee series with three doubles, one homer, two RBI and three runs scored … Morgan collected a career-best five hits in Saturday’s game, including three doubles and a homer … Morgan tied the LSU single-game record for doubles (3), which has been set on numerous occasions, the last time by Kramer Robertson versus Georgia on March 17, 2017 … Morgan leads the SEC in runs scored (30 – tied with LSU RF Dylan Crews) and in doubles (12), and he is No. 4 in on-base percentage (.483), No. 5 in stolen bases (7), and No. 10 in on-base percentage (.660).
•    Junior leftfielder Gavin Dugas launched two homers and drove in four runs in the Tennessee series – he is No. 3 in the SEC with 30 RBI, and he’s No. 9 in total bases (57).
•    Freshman rightfielder Dylan Crews leads the SEC in base hits (36), runs scored (30 – tied with LSU 1B Tre’ Morgan) and total bases (67) … Crews is also No. 3 in home runs (8 – tied with LSU 3B Cade Doughty), No. 6 in on-base percentage (.479), No. 6 in slugging percentage (.691) and No. 6 in walks (18).
•    Sophomore third baseman Cade Doughty is No. 3 in the SEC in home runs (8 – tied with LSU RF Dylan Crews), No. 5 in RBI (27) and No. 5 in slugging percentage (.707).
•    LSU continues to lead the nation in home runs with 42 on the year; Arkansas and Southern Illinois are No. 2 in the nation with 40, and Old Dominion (36 HR) and Dallas Baptist (35 RH) round out the top five.

ABOUT THE JAGUARS
•    South Alabama, a member of the Sun Belt Conference, is 13-9 overall, 2-1 in league play … the Jaguars enter Tuesday’s game on a five-game win streak, including a three-game non-conference sweep at Northwestern State last weekend.
•    The Jaguars are hitting .232 as a team with 30 doubles, three triples, 24 homers and 15 steals in 21 attempts … the South Alabama pitching staff has a 3.66 cumulative ERA and is limiting opponents to a .228 batting average.
•    South Alabama is led at the plate by junior outfielder Ethan Wilson, who is hitting .320 with six doubles, one triple, five homers and 13 RBI … senior outfielder Michael Sandle is batting .287 with five doubles, two homers and 13 RBI … junior utility player Caleb Balgaard has team-highs of six doubles, five homers and 14 RBI.