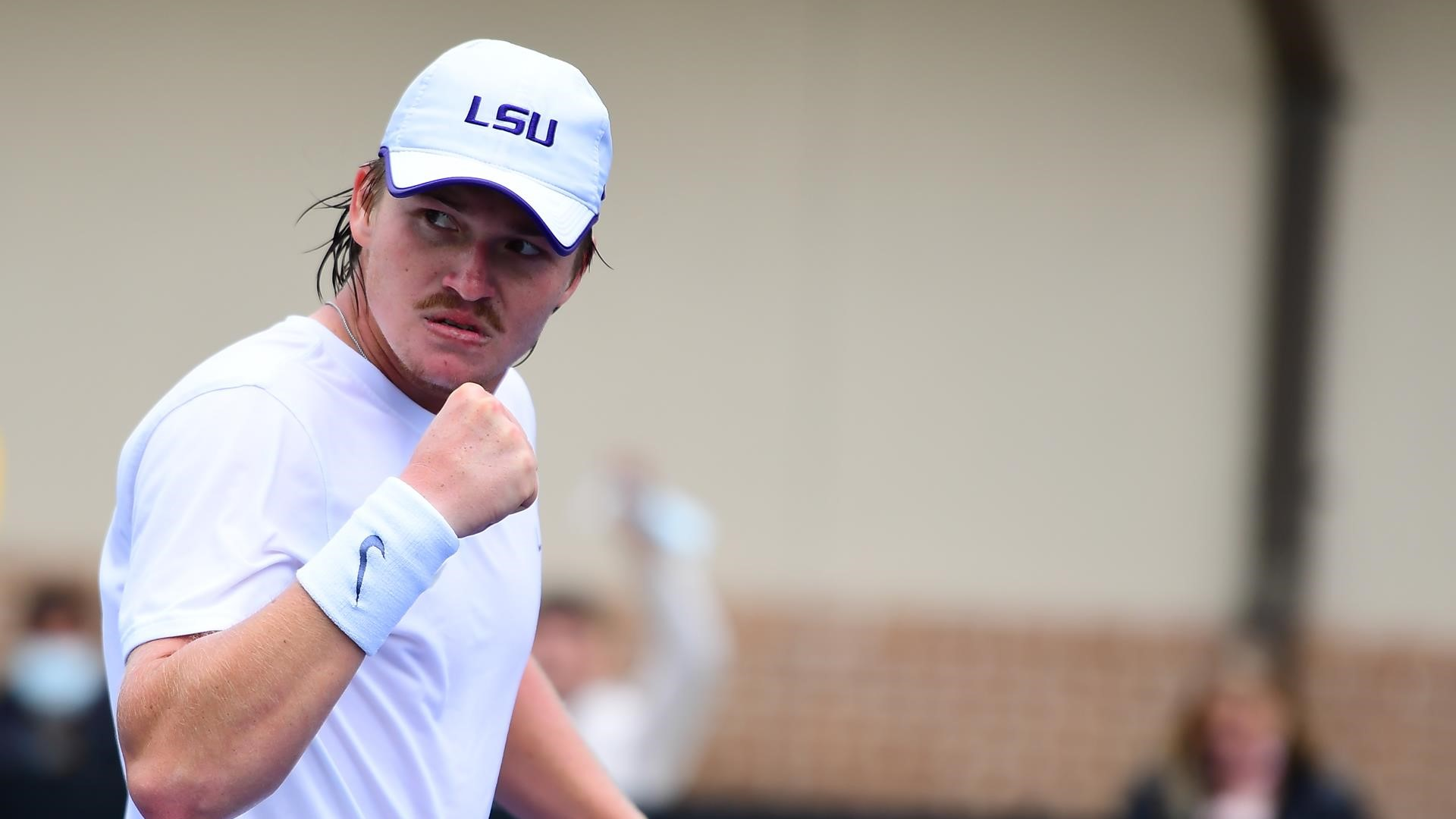 “It’s a good day for the Tigers.” That’s how co-head coach Chris Brandi ended his post game press conference, and it was exactly that for LSU on Sunday.

The Tigers got back to their winning ways on Sunday and it started with doubles. Auburn struck first, taking down Joao Graca and Joey Thomas, 6-1. It was all LSU from there. Nick Watson and Boris Kozlov played in a back-and-forth match versus Auburn’s Tyler Stice and Jan Galka. Tied at 4-4, Kozlov and Watson won the last two sets to earn a 6-4 victory. Shortly after, Ronald Hohmann and Rafael Wagner took down Auburn’s No. 41 duo, 6-4, to clinch the doubles point for LSU.

Singles started off shaky for LSU as freshman Tom Pisane went down quick, 6-0, 6-0. Auburn took a 2-1 lead after Tad Maclean took down LSU’s Joao Graca, 6-3, 6-1. Much like doubles, it was all LSU following that. Boris Kozlov won his first set, 6-2, but found himself down 1-4 in the second set. Kozlov didn’t drop a set after that, tying the match up after a 6-2, 6-4 victory. Benjamin Ambrosio improved his impressive freshman campaign, earning his 9th victory after a 6-3, 6-4 victory on court six. No. 61 Ronald Hohmann had a fiery first set against No. 42 Tyler Stice. The two went back-and-forth until they found themselves in a tiebreak. Tied at seven, Hohmann delivered two crushing cross-court forehands to give himself the first set. Ronnie rolled after that, dominating the second set, 7-6(7), 6-1, giving the Tigers their 11th victory of the season.

“Playing at home helps, we had a great crowd today. Auburn’s been playing better than us, they’ve been playing very good teams close, they beat Alabama 4-3, but we were in a fight. I told our guys that we didn’t have to win the doubles, but I thought that Auburn thought they had to win doubles. When we won the doubles, I think that really took a lot out of Auburn. I think that it really helped us mentally, but it was a close match. I do have faith that [Rafael] Wagner would end up winning, that’s my biased opinion. It ended up being 5-2 [in the third set]. Honestly, we’ve had a lot of guys sick and hurt. So, you know, things weren’t perfect, but they showed a lot of toughness because we had some guys barely practice these last two weeks. For them two of them to win today after barely practicing, seeing doctors, and all that, that’s really impressive. We’re really proud of those guys and it wasn’t a perfect match, but anyone in the SEC is a big win. It’s a good day for the Tigers.”

“I feel great, it was a terrific team win for us. That’s why we come to practice every day, we give our best for moments like this. I just want to be a guy that’s remembered here for just always competing, always staying in the match, giving it my all for every point for my teammates because I know they do the same. Thankfully, I was fortunate enough today that I came back against a great opponent, so I’m quite pleased.”

The Tigers go back on the road to Bryan-College Station to face Texas A&M on Sunday, April 4, at 1:00 p.m.