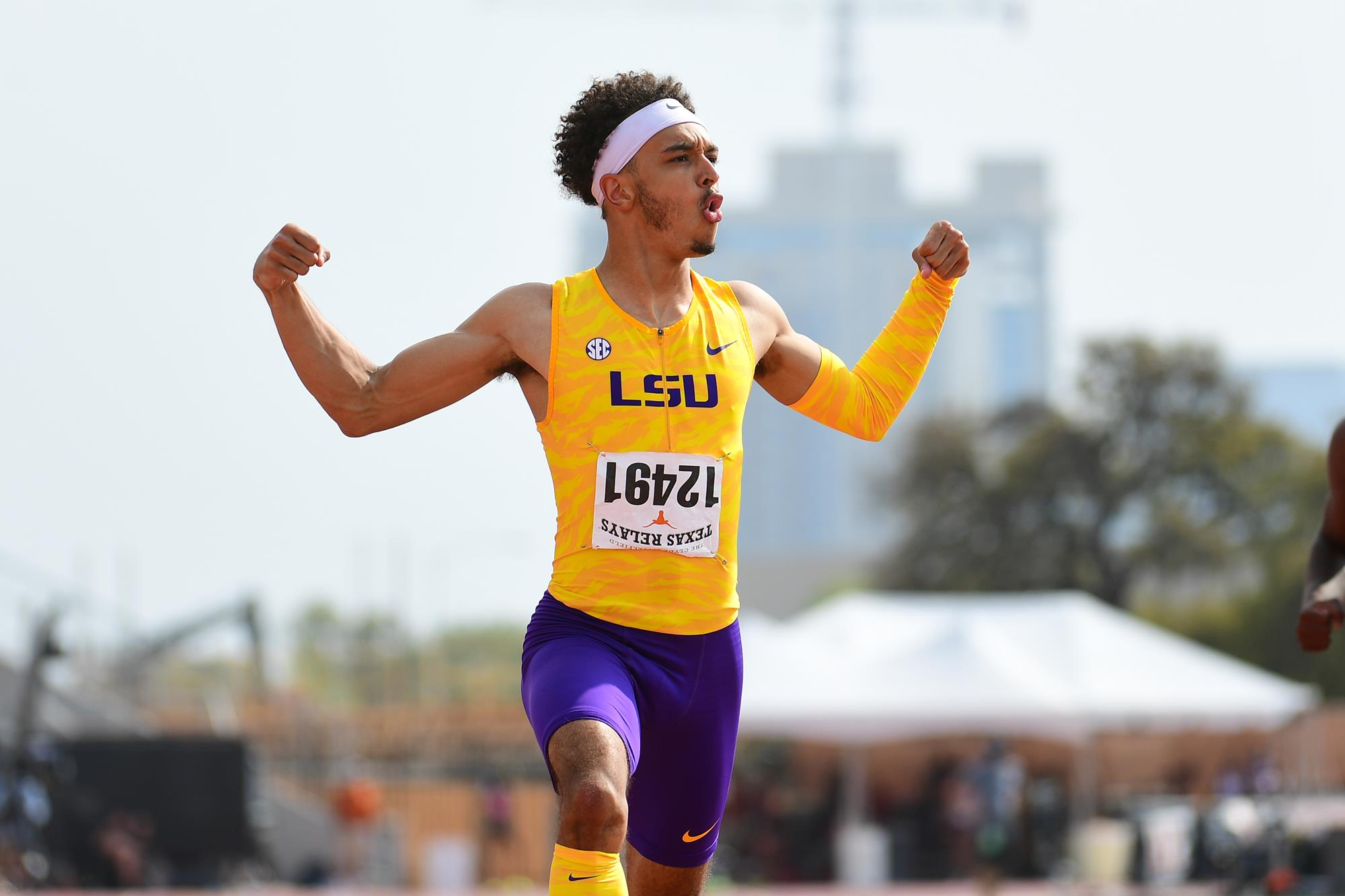 Austin, Texas  –  It was the LSU track and field show on Saturday at the as the Tigers won six event titles to wrap up the 93rd edition of the Texas Relays at Mike A. Myers Stadium. Terrance Laird (200 meters), Tonea Marshall (100m hurdles), Damion Thomas (110m hurdles), Katy-Ann McDonald (800 meters), Jurnee Woodward (400m hurdles), and the women’s 4×100 meter relay were the athletes/events that LSU won titles in.

Laird wowed the crowd with the fastest 200 meter time ever run at Texas Relays when he covered half the oval in 19.81 seconds for the gold medal. The time is absolutely astonishing and it makes him the third fastest collegiate performer behind Walter Dix (19.69/2007) and Divine Oduduru (19.73/2019). His performance garnered him the award of Men’s Performer of the Meet at the Texas Relays. The time ranks as the second fastest in LSU history behind Xavier Carter’s 19.63 that he ran in 2006.

Marshall won her second consecutive Texas Relays title on Saturday with a clean time of 12.75 in the 100 meter hurdles. She was at the forefront of a tremendous LSU showing in the event as Alia Armstrong (12.85) took second, Milan Young (13.06) placed fourth, and Brittley Humphrey notched an eighth place showing with a time of 13.41.

All Tigers in the finals of the 100 meter hurdles!

In the men’s 110 meter hurdles, Damion Thomas won his second career Texas Relays title with a huge personal best of 13.22 to set the LSU school record. The time makes Thomas the 10th fastest performer in collegiate history and it broke Barrett Nugent’s previous LSU school record of 13.32. Also hurdling in the finals was Eric Edwards Jr. and he finished in third with a time of 13.56; that is the seventh fastest time in LSU history.

NOLIMIT FOR THESE TWO

Damion becomes the 10th fastest performer in collegiate history with his PR of 13.22 and it broke Barrett Nugent’s previous LSU school record of 13.32!#GeauxTigers pic.twitter.com/nVtkeVrzJE

LSU wasn’t done showing off in the hurdles quite yet as the women had four representatives in finals of the 400 meter hurdles. Jurnee Woodward won her second straight Texas Relays title in the event with a PR of 56.64 to narrowly edge her teammate, Milan Young, who took second with a readout of 56.94. Brittley Humphrey placed fourth with a readout of 57.54, and freshman Leah Phillips registered a personal best of 58.19 to place sixth.

Y’all ever seen a better hurdle crew? Neither have we.

Departing from all the winners for a brief moment, we must recognize Lisa Gunnarsson who set the LSU school record in the pole vault with a clearance of 14′ 9″ (4.50 meters). Gunnarsson did not win the event as she was competing against four other professional vaulters and she finished third overall. Her clearance broke Rachel Laurent’s previous school record of 14′ 3.25″.

Katy-Ann McDonald circled the track twice in a time of 2:06.84 to become LSU’s first woman to ever win an 800 meter title at the Texas Relays. Freshman Lorena Rangel wasn’t too far off McDonald’s pace and earned a fourth-place showing with a time of 2:08.35.

LSU’s final title of the day was the quartet of Tonea Marshall, Favour Ofili, Symone Mason, and Thelma Davies in the 4×100 meter relay. The group circled the track with a time of 42.87 to win the event. The men’s 4×100 meter relay of Dylan Peebles, Akanni Hislop, Noah Williams, and Terrance Laird placed second with a time of 38.70 in their race.

Sticking to the tune of the relays, the LSU men’s foursome of Dorian Camel, Sean ‘Squirrel’ Burrell, Tyler Terry and Noah Williams combined to clock the sixth fastest time in LSU history, a 3:01.00, en route to a silver finish. Williams clocked a 43.77 split on the anchor leg. In the women’s 4×400 meter relay, Symone Mason, Milan Young, Favour Ofili, and Amber Anning produced a time of 3:32.28 to take third place.

A pair of LSU top 10 marks were registered in field events before all the action started on the track. Abigail O’Donoghue registered an outdoor personal best of 6′ 2″ (1.88 meters) in the high jump to earn a second place finish. She was the top collegiate finisher and the clearance of 6′ 2″ ranks No. 2 at LSU. Thrower Amber Hart notched her second LSU top 10 mark in as many days with a throw of 165′ 10″ (50.55 meters) in the discus; she finished second in the ‘B’ section of that event.

All of LSU’s spectacular performances made both the LSU women and LSU men named Team of the Meet.

Andy Kokhanovsky, who has produced 59 All-Americans at Kansas over the past 17 seasons, has joined the LSU track & field staff as the Tigers’ throws coach.
Congratulations Track & Field Graduates!