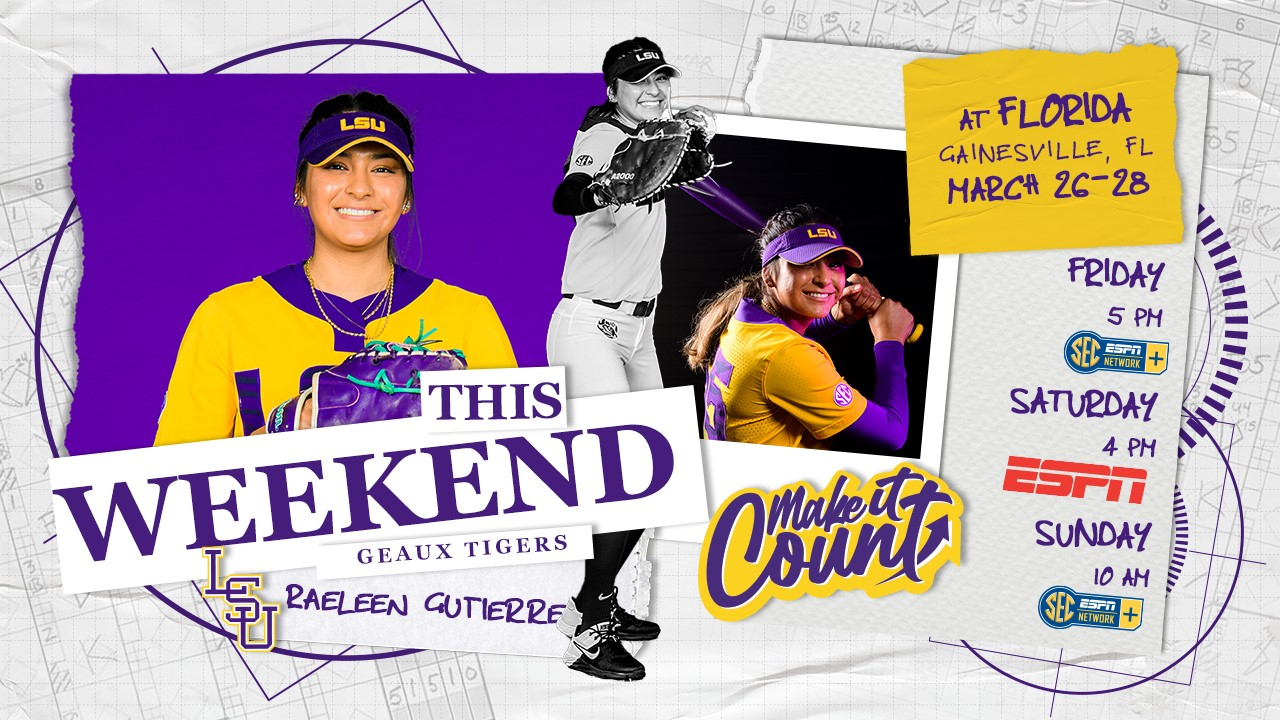 About the Tigers
The Tigers are coming off a 2-1 series win over Texas A&M last Saturday through Monday. The Aggies took the first game 2-1, but LSU bounced back on Sunday with a 6-1 victory. Shelbi Sunseri got the Tigers on the scoreboard first with a two-run homer in the bottom of the first inning to drive in Aliyah Andrews and put LSU up 2-0. Sunseri also earned her fifth win of the season (5-2) to close out the game. Game three was a pitcher’s duel as Ali Kilponen struck out nine batters on her way to the 4-1 series-clinching win on Monday.

Wednesday’s previously scheduled game at South Alabama was cancelled due to inclement weather.

Heading into this weekend’s Top 15 battle, the Tigers have played 13 games against Top 25 opponents and are 6-7 in those games.

At the plate, the Tigers are hitting .268 on the year and averaging 5.35 runs per game. Aliyah Andrews leads the team with a .369 mark and is 16-of-17 in stolen bases. Taylor Pleasants is second on the team at the plate among every day starters with a .316 batting average to go along with 24 RBI and 10 extra base hits. Amanda Doyle leads the team with 25 RBI and 10 extra base hits, including a team-leading seven home runs.

Looking at 400: LSU head coach Beth Torina‘s first opportunity to collect her 400th win at the helm of the Tigers comes on Friday night against her alma mater. Torina is 399-166 in her 10th season in the Purple & Gold.

About Florida
The Gators are coming off a road series SEC sweep at Mississippi State over the weekend and a road loss at UCF on Wednesday evening, 8-6. Against the Bulldogs, Florida picked up three shutouts, 1-0 on Friday, 10-0 on Saturday and 8-0 on Sunday.

In the circle, the Gators have a team ERA of 1.31 and are holding their opponents to a .166 batting average. Elizabeth Hightower leads the team with a 0.99 ERA and is 10-1 with four shutouts and three saves in 18 appearances. She has struck out 64 batters in 70.2 innings and holds batters to a team low .138 average. Katie Chronister and Natalie Lugo have matching 5-1 records with Chronister posting a 1.37 ERA and Lugo coming in at 1.94.

Series Record
The Tigers lead the all-time series with the Gators, 35-32. In their last series meeting in 2019, the Tigers claimed the series 2-1 at Tiger Park. The last time these two met in Gainesville, Florida took the series 2-1.

What’s on Deck
The Tigers return home next week with a midweek game against Louisiana-Monroe on Tuesday before hosting Ole Miss Thursday-Saturday. Ticket information for LSU home games is available at LSUtix.net. For a full schedule, click here.