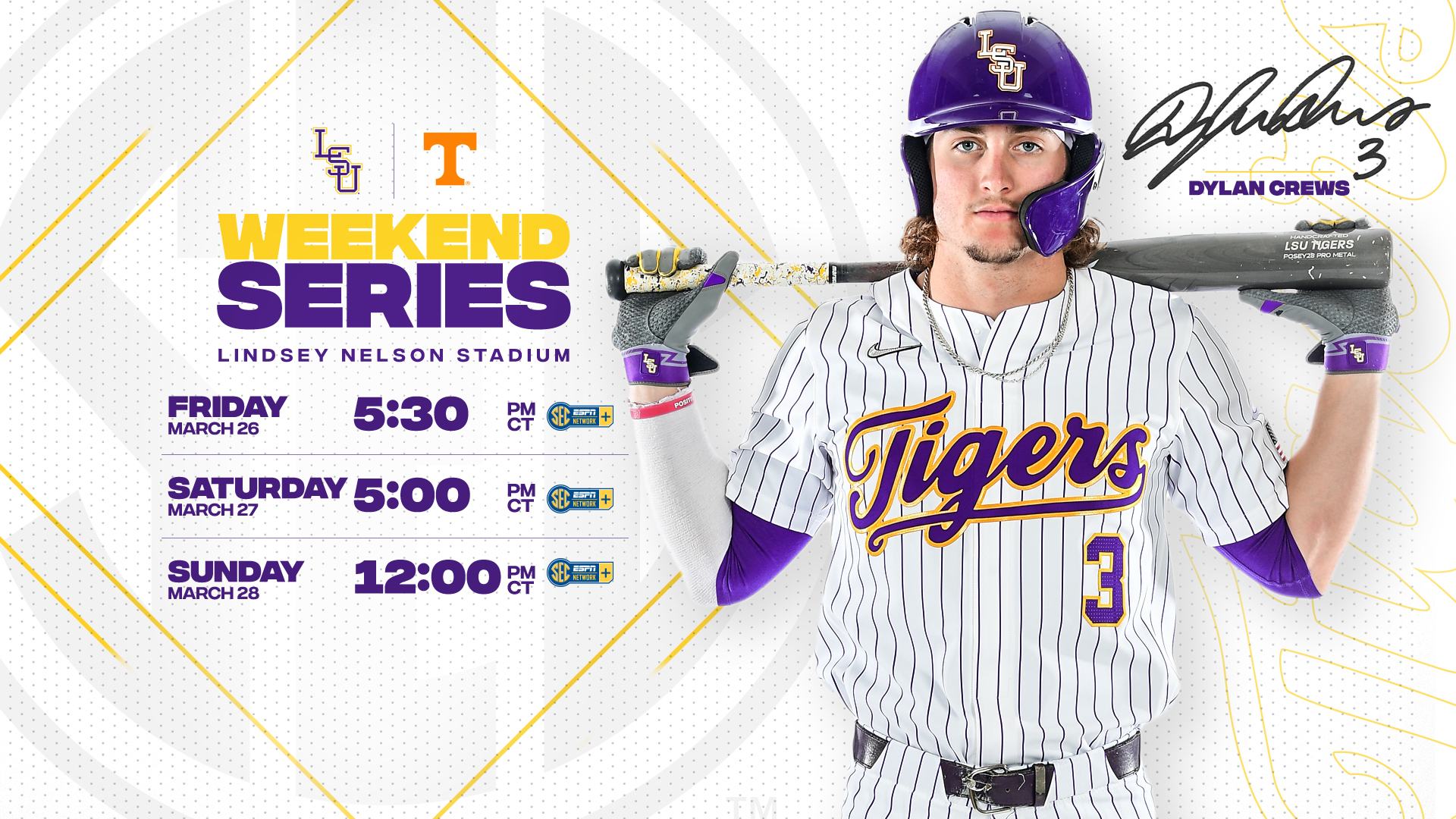 ONLINE
•    All three games may be viewed on SEC Network +, accessible at Watch ESPN.com and the Watch ESPN app

SERIES RECORD VS. TENNESSEE
LSU leads the all-time series with Tennessee, 58-22, and this weekend’s series marks the first meeting between the clubs since 2018, when the Tigers swept three games from the Volunteers in Baton Rouge. It’s also the first meeting in Knoxville since 2016, when the Tigers won all three games over the Vols. The Tigers have won 14 of their last 15 games versus UT.

QUOTING PAUL MAINIERI
“There’s something about playing the in SEC, you just kind of become acclimated to it. It’s a level of play that you have to get used to, you have to adapt to a playing in this league. You have to raise the level of your game. I could feel that happening with our team last weekend; our young players were adapting as the weekend went on and becoming more and more confident, and hopefully it will pay off as we continue to work our way through the schedule. Tennessee has an outstanding ball club, a team ranked in the Top 10. This is how it is in the SEC, there are no off weekends.”

ABOUT THE TIGERS
•    LSU is No. 1 in the nation with 37 homers on the year; the Tigers defeated second-ranked Mississippi State Sunday on the strength of a pair of dingers – a solo shot by leftfielder Gavin Dugas broke a 2-2 tie in the sixth inning, and designated hitter Brody Drost’s two-run blast in the seventh extended the Tigers’ lead to 6-2 … LSU is No. 3 in the SEC in runs scored (164), No. 3 in RBI (152), No. 4 in base hits (204) and No. 4 in total bases (360).
•    Freshman rightfielder Dylan Crews failed to reach base safely for the first time all season in Sunday’s game versus Mississippi State … Crews was the only Tiger to have reached base safely in all 20 of LSU’s games prior to Sunday’s contest … Crews also was his eight-game hitting streak end on Sunday; the eight-game streak was his second-longest of the season, he also had an 11-game hit streak earlier in the year … Crews has gone hitless in just two of LSU’s games this season – on March 7 vs. Oral Roberts and on Sunday vs. Mississippi State.
•    Sophomore third baseman Cade Doughty has LSU’s longest current reached-base-safely streak at 14 games, which is LSU’s third-longest this season, behind Dylan Crews’ 20 and first baseman Tre’ Morgan’s 15 … Doughty leads LSU in multiple-RBI games with eight and in total RBI with 25.
•    LSU junior right-hander Landon Marceaux increased his consecutive innings streak without allowing an earned run to 31.1 on Saturday versus Mississippi State … Marceaux allowed one unearned run on two hits in seven innings against the Bulldogs with three walks and three strikeouts.
•    Marceaux’s streak is among the best in LSU history – Greg Smith threw 28.2 straight scoreless innings (no earned or unearned runs) in 2005; Jared Poche’ fired 32 straight scoreless innings in 2017; Ben McDonald recorded 44.2 consecutive scoreless innings in 1989; and Aaron Nola pitched 54 straight innings without allowing an earned run beginning in 2013 and ending during the 2014 season.
•    Marceaux last allowed an earned run on March 7, 2020, versus UMass Lowell … this season, Marceaux is 2-1 with a 0.00 ERA in 30 innings, and he’s recorded six walks and 35 strikeouts while limiting opponents to a .140 batting average.
•    Junior right-hander AJ Labas earned the win on Sunday over Mississippi State, limiting the Bulldogs to two runs on four hits in six innings with one walk and three strikeouts … LSU’s three weekend starting pitchers – Jaden Hill, Landon Marceaux and AJ Labas – combined to work 20.1 innings in the Mississippi State series, allowing eight earned runs (3.54 ERA) on 15 hits with six walks and eight strikeouts.
•    Junior right-hander Devin Fontenot earned his second save on Sunday against Mississippi State, working a perfect 1.2 innings to preserve LSU’s victory … Fontenot entered the game in the eighth inning with LSU leading 6-3 and runners on first and second with one out, and he promptly retired the next two Mississippi State hitter on flyouts … Fontenot also pitched a perfect relief inning against Southeastern Louisiana on Tuesday night, recording two strikeouts.
•    Freshman right-hander Ty Floyd enjoyed an impressive SEC debut on Sunday versus Mississippi State, striking out all three batters he faced in the seventh inning and the first batter in the eighth inning.

ABOUT THE VOLUNTEERS
•    Ninth-ranked Tennessee opened SEC play last weekend by winning two of three games at Georgia … the Volunteers defeated
•    Tennessee is No. 11 in the SEC in hitting with a .268 team batting average … the Vols have collected 38 doubles, eight triples, 22 homers and 25 stolen bases.
•    The Volunteers pitching staff is No. 6 in the SEC in team ERA (3.16) … the staff is limiting opponents to a .230 batting average and has allowed 18 home runs.
•    Tennessee is led at the plate by infielder Liam Spence, who is hitting .381 with six doubles, two triples, two homers, and 18 RBI … Spence leads the SEC in base hits with 32 … infielder Jake Rucker is batting .338 with two doubles, one triple, three homers and 22 RBI, and outfielder Drew Gilbert is batting .329 with three doubles, five homers and 22 RBI.