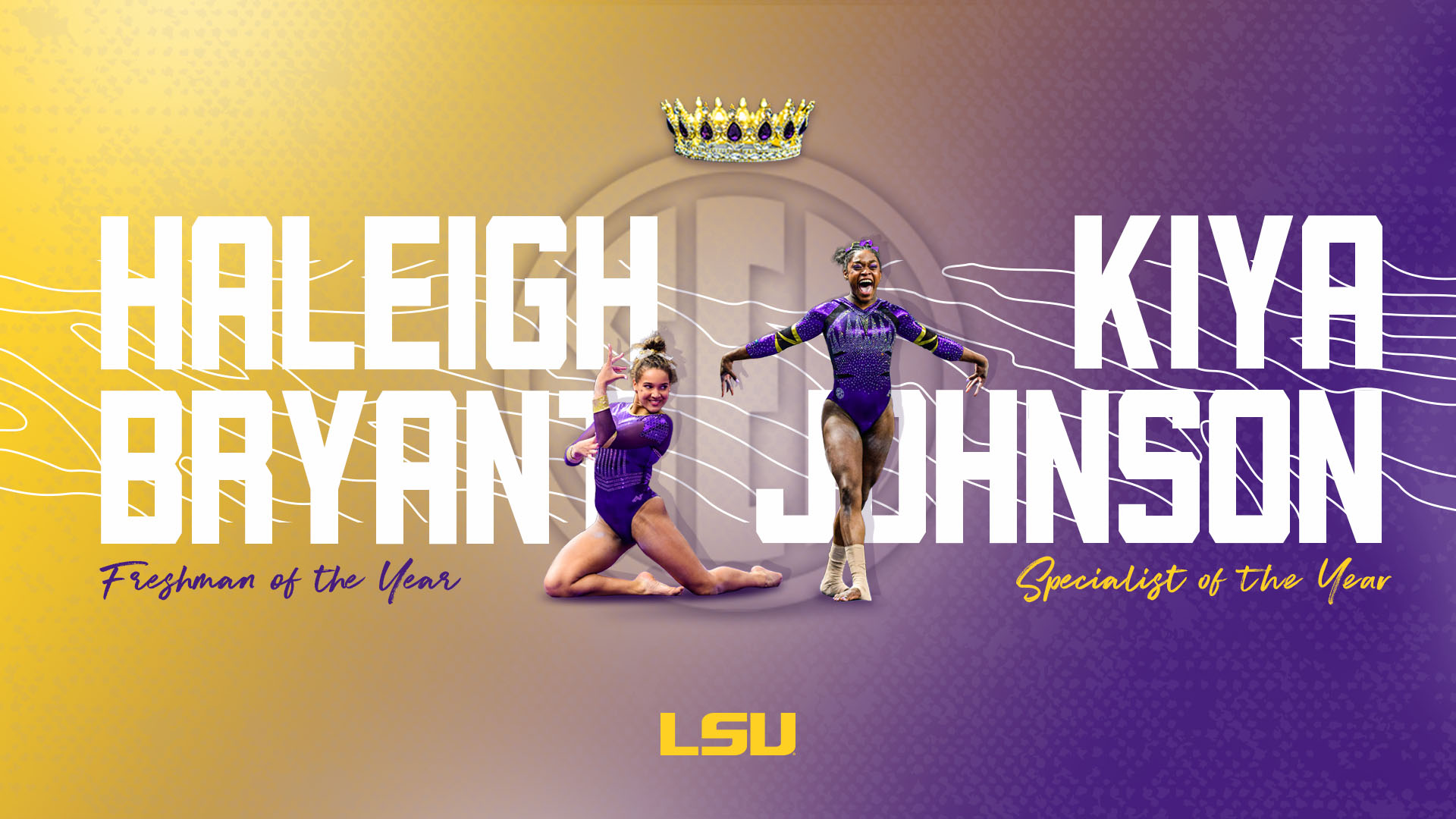 “We are so excited for both Haleigh and Kiya to be recognized at this level,” head coach Jay Clark said. “It is a tremendous accomplishment for our program and a glimpse of what is on the horizon for us all. We have a team full of great gymnasts and are proud of each and every one of them.”

The Southeastern Conference also announced Bryant, Johnson, Elena Arenas and Alyona Shchennikova as All-SEC performers. Arenas captured the vault title with a 9.95 on her Yurchenko Full. Shchennikova finished with a 9.925 on vault for second overall. Arenas and Bryant were also named to the SEC All-Freshman team.

Bryant earned a share of the vault title at the 2021 SEC Gymnastics Championships with a 9.95, the seventh LSU freshman to win an SEC title. Nationally, she finished the season third on vault (9.956 NQS), fourth on vault (9.956 NQS) and ninth in the all-around (39.594 NQS), the highest rankings by any freshman in the Southeastern Conference.

She owns career highs of 10 on vault, 9.90 on bars, 9.9 on beam, 9.975 on floor and 39.625 in the all-around. Bryant is the only freshman in the SEC and just one of two in the country to score a 10 this season. In her debut season, she scored a 9.90 or better eight times on vault and seven times on floor. In nine meets, Bryant won 11 total titles with five on vault, four in the all-around and two on floor. She was also named the SEC Freshman of the Week six times and Gymnast of the Week once.

Johnson captured the floor exercise title at the 2021 SEC Gymnastics Championships with a perfect 10.0 in her postseason debut. She became the 10th gymnast in conference history to score a 10.0 on the floor exercise at the SEC Championships. Johnson joined fellow LSU gymnasts Sarah Finnegan (2019) and Ashleigh Gnat (2017) as the only competitors to score a 10 at the SEC meet on floor in the past five years.

She finished the season as the top performer in the country on floor, competing in four meets on the event and scoring a perfect 10.0 three times. Johnson is tied with Trinity Thomas of Florida and Anastasia Webb of Oklahoma for the most perfect scores in the country this season, with Johnson and Thomas the only gymnasts with multiple perfect scores on floor.

The best freshman in the @SEC. The best in the nation. pic.twitter.com/aAfrJWoJ5H

??? No. 1 floor performer in the country
?? SEC Floor Exercise Champion
?? Three perfect scores on floor
?? Season highs of 9.925 or higher on all four events pic.twitter.com/ndggb2kakv