LSU and Tulane to Meet for First Time Since 2018 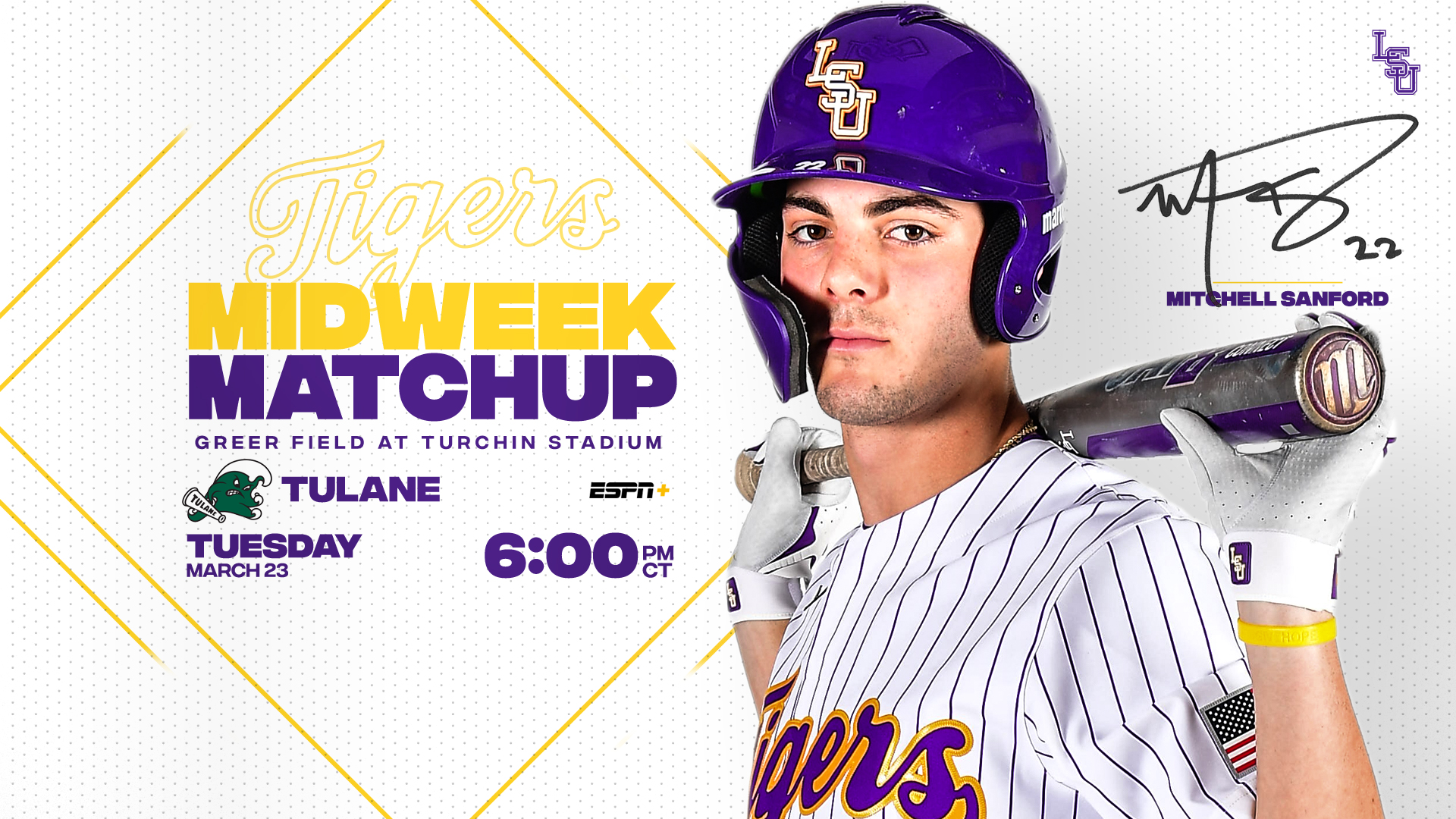 ONLINE
• The game may be viewed on ESPN +

SERIES RECORD VS. TULANE
LSU leads Tulane, 173-132-3, in a series that began with the first intercollegiate athletic event in LSU history, a 10-8 victory for the Tiger baseball squad over Tulane in 1893. LSU won nine of 10 meetings with the Green Wave from 2011-15, but Tulane has won five of the last six games in the series from 2016-18. Tuesday’s game marks the first meeting between the Tigers and the Green Wave since April 18, 2018, when Tulane edged LSU, 10-9, at Turchin Stadium in New Orleans. Paul Mainieri has a 14-10 mark against Tulane in his 15-season coaching tenure at LSU.

QUOTING PAUL MAINIERI
“We haven’t played Tulane since 2018, but we plan to play them every year going forward, alternating the site each year. We were scheduled to play them last season here in Baton Rouge, but of course the game had to be canceled due to the pandemic. We’ll look forward to playing our third midweek road game of the season on Tuesday night at Tulane, which always is a tough place to play. Hopefully, the confidence we gained by beating the No. 2 team in the country (Mississippi State) on Sunday will springboard us into continued success this week.”

ABOUT THE TIGERS
• LSU is No. 1 in the nation with 37 homers on the year; the Tigers defeated second-ranked Mississippi State Sunday on the strength of a pair of dingers – a solo shot by leftfielder Gavin Dugas broke a 2-2 tie in the sixth inning, and designated hitter Brody Drost’s two-run blast in the seventh extended the Tigers’ lead to 6-2 … LSU is No. 3 in the SEC in runs scored (164), No. 3 in RBI (152), No. 4 in base hits (204) and No. 4 in total bases (360).
• Freshman rightfielder Dylan Crews failed to reach base safely for the first time all season in Sunday’s game versus Mississippi State … Crews was the only Tiger to have reached base safely in all 20 of LSU’s games prior to Sunday’s contest … Crews also saw his eight-game hitting streak end on Sunday; the eight-game streak was his second-longest of the season, he also had an 11-game hit streak earlier in the year … Crews has gone hitless in just two of LSU’s games this season – on March 7 vs. Oral Roberts and on Sunday vs. Mississippi State.
• Sophomore third baseman Cade Doughty has LSU’s longest current reached-base-safely streak at 14 games, which is LSU’s third-longest this season, behind Dylan Crews’ 20 and first baseman Tre’ Morgan’s 15 … Doughty leads LSU in multiple-RBI games with eight and in total RBI with 25.
• LSU junior right-hander Landon Marceaux increased his consecutive innings streak without allowing an earned run to 31.1 on Saturday versus Mississippi State … Marceaux allowed one unearned run on two hits in seven innings against the Bulldogs with three walks and three strikeouts.
• Marceaux’s streak is among the best in LSU history – Greg Smith threw 28.2 straight scoreless innings (no earned or unearned runs) in 2005; Jared Poche’ fired 32 straight scoreless innings in 2017; Ben McDonald recorded 44.2 consecutive scoreless innings in 1989; and Aaron Nola pitched 54 straight innings without allowing an earned run beginning in 2013 and ending during the 2014 season.
• Marceaux last allowed an earned run on March 7, 2020, versus UMass Lowell … this season, Marceaux is 2-1 with a 0.00 ERA in 30 innings, and he’s recorded six walks and 35 strikeouts while limiting opponents to a .140 batting average.
• Junior right-hander AJ Labas earned the win on Sunday over Mississippi State, limiting the Bulldogs to two runs on four hits in six innings with one walk and three strikeouts … LSU’s three weekend starting pitchers – Jaden Hill, Landon Marceaux and AJ Labas – combined to work 20.1 innings in the Mississippi State series, allowing eight earned runs (3.54 ERA) on 15 hits with six walks and eight strikeouts.
• Junior right-hander Devin Fontenot earned his second save on Sunday against Mississippi State, working a perfect 1.2 innings to preserve LSU’s victory … Fontenot entered the game in the eighth inning with LSU leading 6-3 and runners on first and second with one out, and he promptly retired the next two Mississippi State hitter on flyouts … Fontenot also pitched a perfect relief inning against Southeastern Louisiana on Tuesday night, recording two strikeouts.
• Freshman right-hander Ty Floyd enjoyed an impressive SEC debut on Sunday versus Mississippi State, striking out all three batters he faced in the seventh inning and the first batter in the eighth inning.
• The seating capacity limit at LSU’s Alex Box Stadium increased from 25 percent to 50 percent last weekend, and the paid crowd of 5,031 on Saturday was the Tigers’ largest attendance figure of the season.

ABOUT THE GREEN WAVE
• Tulane is 9-10 this season, and the Wave were swept in three games by Louisiana Tech last weekend in New Orleans … the Wave are batting .256 as a team with 39 doubles, eight triples, 12 home runs and 24 steals in 32 attempts … the Tulane pitching staff has a 4.17 ERA and is limiting opponents to a .232 batting average.
• Tulane is led at the plate by infielder Collin Burns, who is batting .370 with nine doubles, three triples, one homer, 11 RBI and seven stolen bases … catcher Frankie Niemann is batting .321 with two doubles, two homers and 14 RBI … infielder Chase Engelhard has a team-high three homers, and catcher Luis Aviles leads Tulane in RBI with 16.
• Tyler Hoffman, the Green Wave’s starting pitcher on Tuesday, has limited opponents to a .109 cumulative batting average, and he’s allowed just two extra-base hits in 17.1 innings, both doubles.