Tigers Face 1-Seed Michigan In NCAA Round of 32 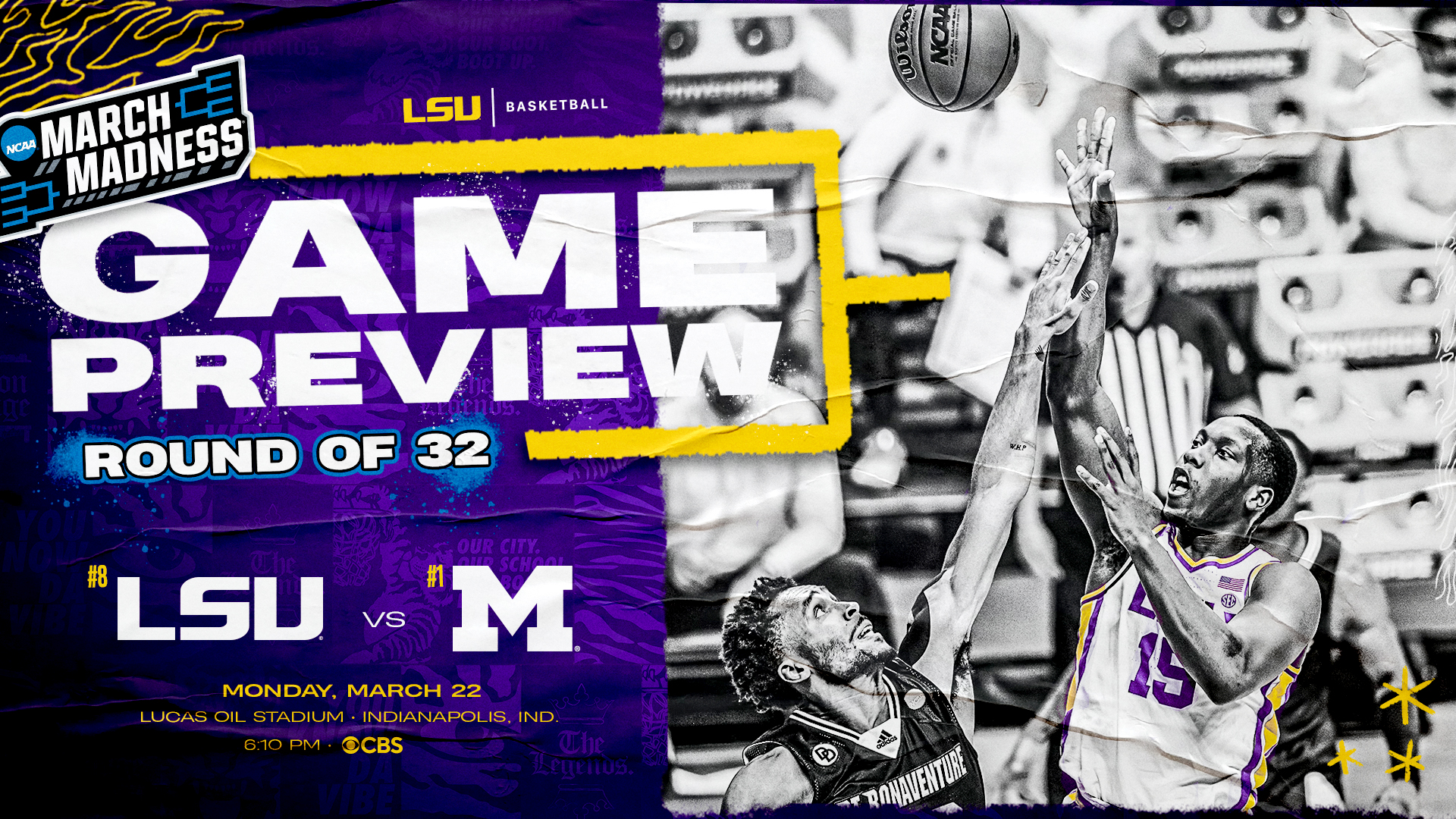 INDIANAPOLIS, Indiana – The Tigers have survived and advanced.

Now a chance to make a Sweet 16 for a second straight NCAA Tournament looms just 40 minutes of basketball away.

No. 8 seed LSU and No. 1 seed Michigan will meet in an NCAA East Regional second-round game Monday night on the Unity court at Lucas Oil Stadium for the right to go to the Sweet 16 Monday night.

Tipoff will be 6:10 p.m. CT on CBS with Andrew Catalon, Steve Lappas and reporter AJ Ross on the call with the “Voice” of the Tigers Chris Blair and former coach John Brady in the building for the call on the LSU Sports Radio Network (Baton Rouge flagship Guaranty Media on Eagle 98.1 FM).

LSU is 19-9 and will be looking for a 20-win season for the third consecutive year with wins in seven-of-the-last-10 games, while Michigan is 21-4 overall. The Wolverines are 8-3 in the 11 games since a five-game postponement for COVID issues Jan. 27 through Feb. 11. Michigan is ranked No. 4 in the country in the AP media poll.

LSU won its opening round game on Saturday, 76-61, against nine-seed St. Bonaventure. The Tigers overcame a slow start to move to a 31-22 halftime advantage and then was able to get a big lead and put the game at a place where the Bonnies could not answer back.

LSU had three players with double doubles in the game and freshman Cameron Thomas posted 27 points with two treys and 11-of-13 at the free throw line. Aundre Hyatt had career numbers in both points and rebounds getting 13 points and 10 boards, while Darius Days had his eight double of the year with 13 points and 11 rebounds, while Trendon Watford had 11 points and 11 boards.

Hyatt had seven offensive rebounds in the game.

The Tigers and Michigan have met three times, with Michigan winning twice. The teams met in a mid-1990s home-and-neutral series in Baton Rouge and Auburn Hills, Michigan. LSU won the last meeting in 2017 in Maui, 77-75.

Dickinson leads the Wolverines in scoring at 14.3 points and 7.4 rebounds a game. Franz Wager is at 12.7 points. Michigan has been without Isaiah Livers, who averaged 13.1 points in 23 games before suffering a stress fracture in his right foot.

Thomas averages 22.8 points per game to lead the Tigers, including a nation’s leading 187 made free throws with Trendon Watford at 16.5 points, Smart at 15.6 points and Days 11.8 points a game. While Hyatt is only averaging 4.3 points for the season, he has scored 21 points in the last two games with 18 rebounds.

Coach Will Wade met with the media on Sunday and here were some of his comments:

“It’s been a long night and early morning in preparation. They’re big, physical, they’re 6’9, 6’10, 7’0 across the frontline. No. 12 [Mike Smith] controls the game, he does a great job. He’s very similar to Auburn’s Sharif Cooper, he obviously shoots really well from three, so it’ll be a big challenge. We’re going to have to keep them off the glass which has been an issue for us all season. They’re a one seed for a reason. They’re top-10 in the country both offensively and defensively. I think they have the sixth best offensive and the seventh best defensive, so they’re a tremendous team. [Hunter] Dickinson is a tremendous player, [Eli] Brooks at the at the two, [Franz] Wagner is going to be a first-round draft pick. They’re well coached. They run a lot of stuff on offense and change their defenses up. They play mostly man, but they play some zone, they sometimes press after free throws. They do a lot of things that we need to prepare for in a short amount of time.”

On dealing with Michigan’s height…

“We have to, somehow, keep the ball out of the post. When they get it in the post, not only do they have high-quality scoring options, they’re going to get the offensive rebound, then it’s just a matter of if they make it or we foul them. All five of their starters shoot over 77 percent from the free-throw line, so they’re all very good free throw shooters. We have to find a way to keep that thing out of the post, keep them from getting deep position, and keep them from being able to maneuver down there in the restricted area. Nobody [that LSU has played] matches up with their size, physicality, their scheme. The SEC is just different. Everybody has spaced-out bigs and long, athletic guys. The SEC guys look like the kid from St. Bonaventure yesterday. Teams just don’t have these big guys like that. I guess the last team we played with something like that is Houston a couple years ago, but their guys were 6’8, not 7’0. Michigan has huge guys that just bully you.”

On the quick turnaround…

“It’s a little different because the quick turnarounds we had were in the SEC Tournament and we were very familiar with all of those teams. We had played Arkansas two weeks earlier, we had played Alabama twice already during the year, Ole Miss, we were familiar with them. We haven’t had a turnaround like this, and we put everything we had into the St. Bonaventure game. It’s not like we were watching a bunch of film on Michigan or preparing for Michigan, we were 100 percent in on the Bonnies. We were up pretty much all night and up early this morning trying to come up with some things. We got a crash course. It’s been a little better, in a sense, because Michigan has had to play different without Isaiah Livers. We have three or four games without Livers, so we can focus in on those. Some other teams did some things to them that we need to try to take advantage of so we’ll have to go back and comb through some of those games as well.”