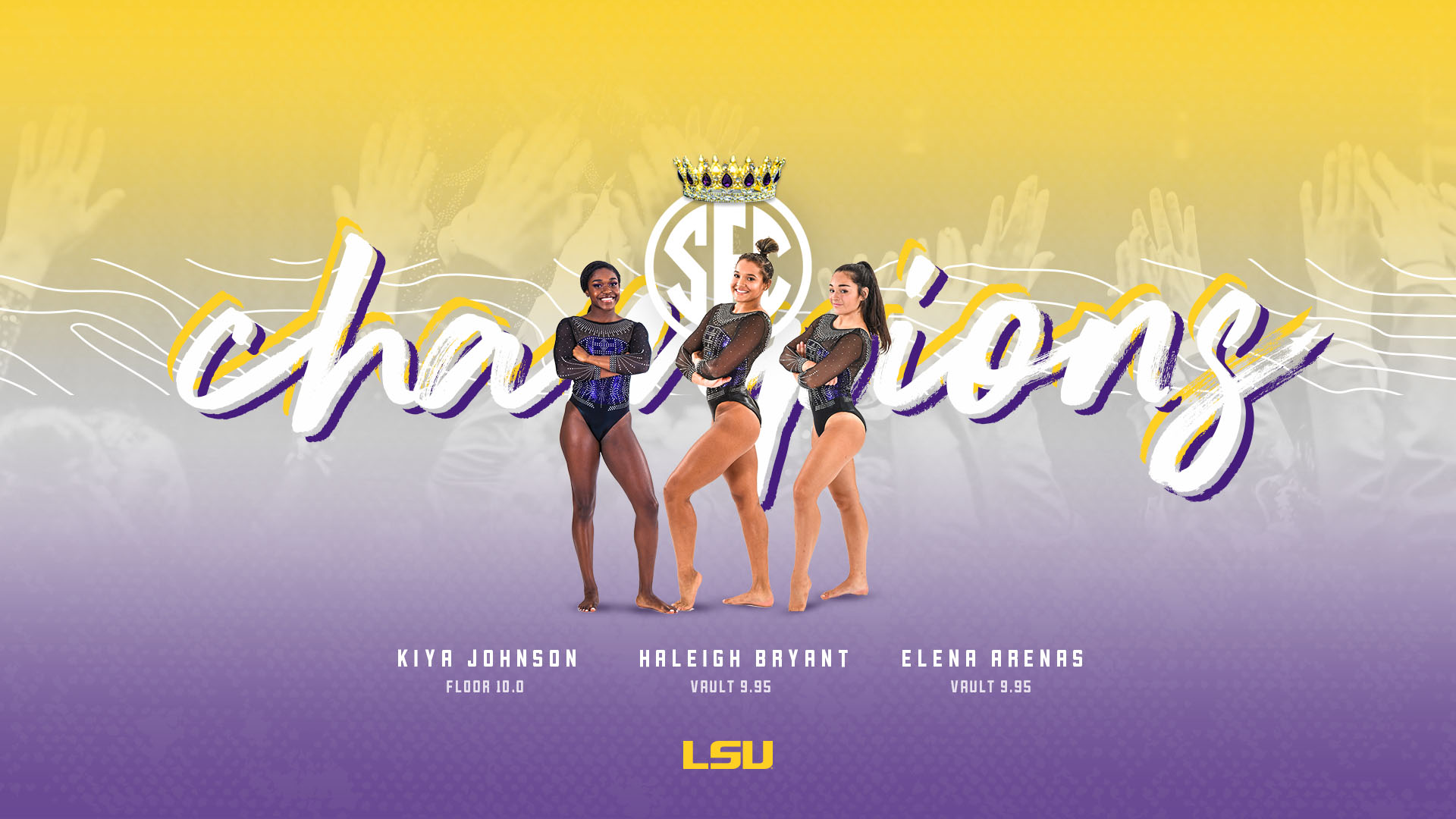 LSU finished just .100 behind Alabama, who took the title with a 197.875. The score marked the third highest for the program at SEC Championships. The squad put up a feverous comeback on floor and vault with scores of 49.500 and 49.625.

“I am very proud of this team as a whole,”  head coach Jay Clark said. “I am proud of what they did tonight. They never lost their focus or got distrcted. We showed a lot of guts and fought until the very end. They stayed true to everything we wanted them to be. I am pleased with where they are in their growth. We know where we can improve and we will keep grinding and get better. Our big goals are still out there.”

In their first SEC meet, Bryant, Arenas and Johnson took the league by storm. Johnson scored her third career 10 on floor and fifth overall. She won the program’s 14th floor exercise title. She joined Ashleigh Gnat and Sarah Finnegan as LSU gymnasts that earned a 10 in the SEC Championship. It marked the 10th perfect score earned at SEC Championships.

This vault from Elena Arenas was PERFECTION?? pic.twitter.com/J4ndpYRgbt

Arenas and Bryant scored a 9.95 to take the 13th and 14th vault titles in school history. Arenas earned a perfect score on her 9.95 valued Yurchenko full. Bryant anchored the event with a 9.95 as well.

Johnson finished second in the all-around with a score of 39.625.

Tigers Open Solid On Bars
LSU opened the meet in a tie for second with a 49.350. Johnson started the rotation with a 9.875. She was followed by a 9.825 from Chase Brock. Freshman Olivia Dunne scored a 9.90 and Haleigh Bryant earned a 9.80. The squad used a 9.85 from Alyona Shchennikova and Sami Durante anchored with a 9.90.

Johnson Leads Beam Team
The Tigers trailed only Alabama at the halfway point of the meet 98.650-99.000. Christina Desiderio opened the rotation with a 9.80 and Durante followed with a 9.875. At the back half of the rotation, senior Bridget Dean earned a 9.875, Johnson scored a 9.90 and senior Reagan Campbell anchored with a 9.85.

Floor Closes Gap with Johnson’s 10
The Tigers earned a 49.500, highlighted by the 10 in the anchor spot from Johnson. Desiderio opened the rotation with a 9.85 and Shchennikova followed with a 9.925. Ballard scored a 9.80 and the Tigers used a 9.925 from Bryant in the fifth spot.

Vault Scores Best Ever at SEC Championships
The LSU vault lineup closed the night on fire with a 49.625 for the best score in school history at SEC Championships. Durante opened the rotation with a career high 9.90 and Shchennikova earned a 9.925 in the second spot. Arenas scored her perfect 9.95 in the third spot for the title and Sarah Edwards followed with a 9.90. Bryant capped off the night with a 9.95.

LSU returns to Baton Rouge and will learn its destination for the NCAA Regional on Monday. The Tigers will compete for a spot in the NCAA Championships April 2-3.