No. 3 Tigers Are Set To Host LSU Beach Invitational 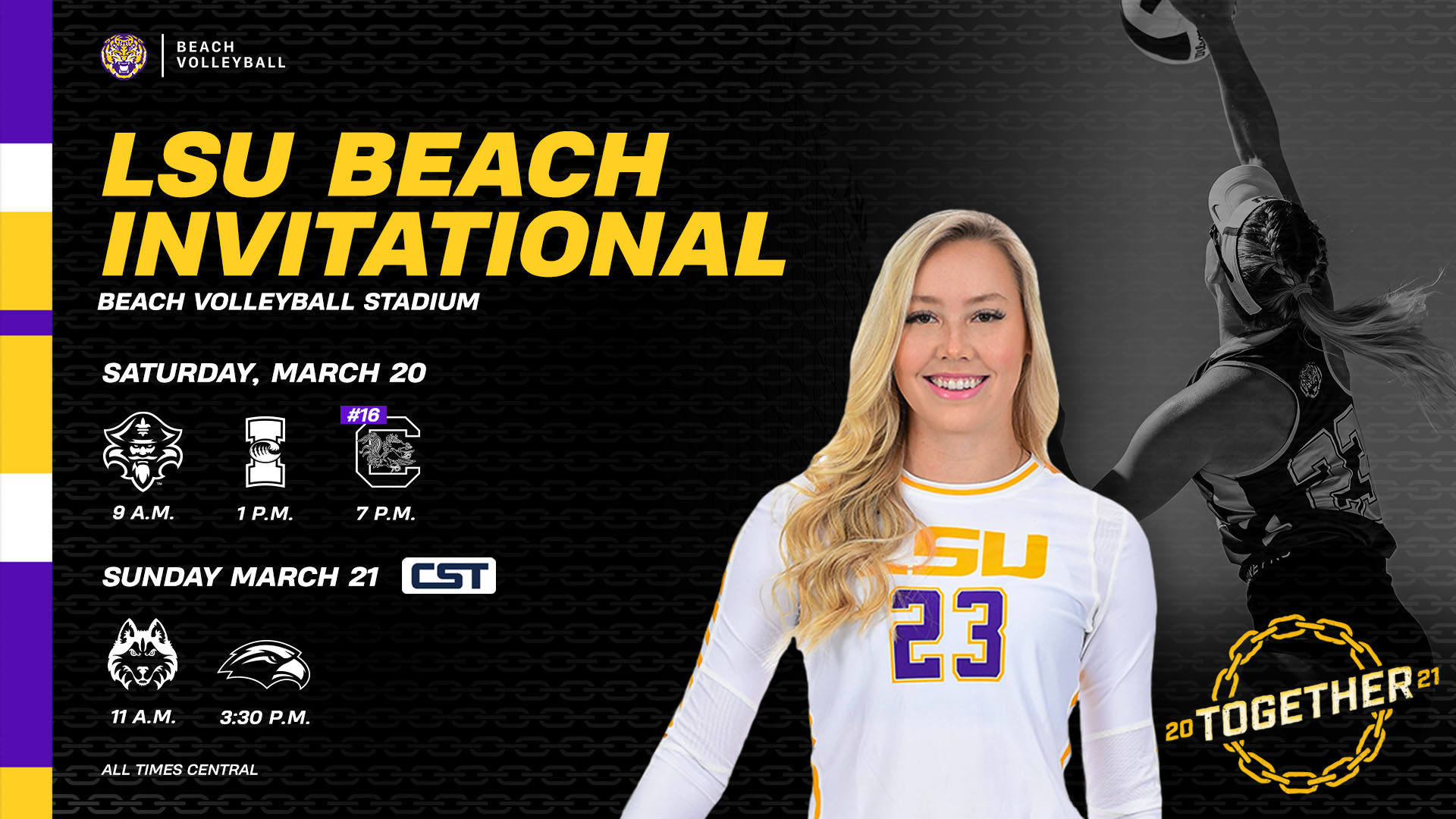 BATON ROUGE – The No. 3 LSU Beach Volleyball (11-2) team will welcome five teams into its home sand this weekend for the LSU Beach Invitational.

LSU will face New Orleans (3-4) Saturday a 9 a.m. CT followed by Texas A&M-Corpus Christi (5-5) at 1 p.m. The Tigers’ third match of the day will be a battle for SEC bragging rights at 7 p.m. in a matchup against the No. 16 South Carolina Gamecocks (9-3), the conference’s only other school with a beach volleyball program.

“This is a good weekend for us to continue to improve,” said head coach Russell Brock. “We have a good group of opponents that will give us an opportunity to get a good evaluation of where we are and hopefully continue to get better.”

On Sunday LSU will host Houston Baptist (2-9) at 11 a.m. before its final match of the weekend against Southern Miss (3-9) at 3:30 p.m. The weekend’s full list of matches can be found at the bottom of the page.

Cox Sports Television will broadcast the final five matches of Sunday, beginning with the LSU vs. Houston Baptist match. Lyn Rollins will be on the call and Andrew Beyer will provide the color commentary.

LSU will allow limited general admission vouchers for each individual match for the remainder of the season. Vouchers will be available an hour and a half prior to the start of each given match and will be on a first come first serve basis. If a match begins at 7 p.m., the first voucher will be given out at 5:30 p.m. Each fan is limited to one voucher and must be present in order to receive it. For the full release, including where to go to receive a voucher, click here.

The weekends headlining matchup will take place Saturday evening under the lights of LSU Beach Volleyball Stadium. LSU and South Carolina are the only two schools within the Southeastern Conference that sponsor a beach volleyball program. Both teams compete in the CCSA for beach volleyball, but SEC pride will be on the line when the match begins. The Tigers are 10-2 all-time vs. the Gamecocks. The only other time South Carolina made the trip to LSU Beach Volleyball Stadium, the Tigers came away victorious in 2018.

“South Carolina is one that is always circled on the calendar,” Brock explained. “It’s definitely one that we want to play well. They have proven that they are a team that’s always dangerous against everybody they play and this year we know that they’ll be stronger than they have been in the past. We expect a fight with them and we want to make a statement just as bad as they want to make a statement.”

LSU has seen success on all five courts this season, but no court has had more success than the top court of Taryn Kloth and Kristen Nuss. They are a perfect 13-0 this season and have dropped only one set and they were named the AVCA National Pair of the Week after a flawless performance last weekend in Gulf Shores. Kloth and Nuss are currently rated as the top nation’s top pair by CollegeBeachVB.com.

On Court 2, Claire Coppola Kelli Greene-Agnew have paired up for the past nine matches, accumulating a 7-2 record and only dropping matches against No. 1 Florida State’s Court 2 pair. Ashlyn Rasnick-Pope and Toni Rodriguez have played in every match together on Court 3 and have an 11-2 record.

LSU has had a few pairs compete on Court 4 with mixes of Jess Lansman, Sydney Moore, Ellie Shank and Grace Seits, but overall whoever has taken the sand in that position, the Tigers have had fair success with an overall court record of 10-3. Olivia Ordonez and Kahlee York have been a consistent pair on Court 5 for the Tigers with a 9-2 record together.