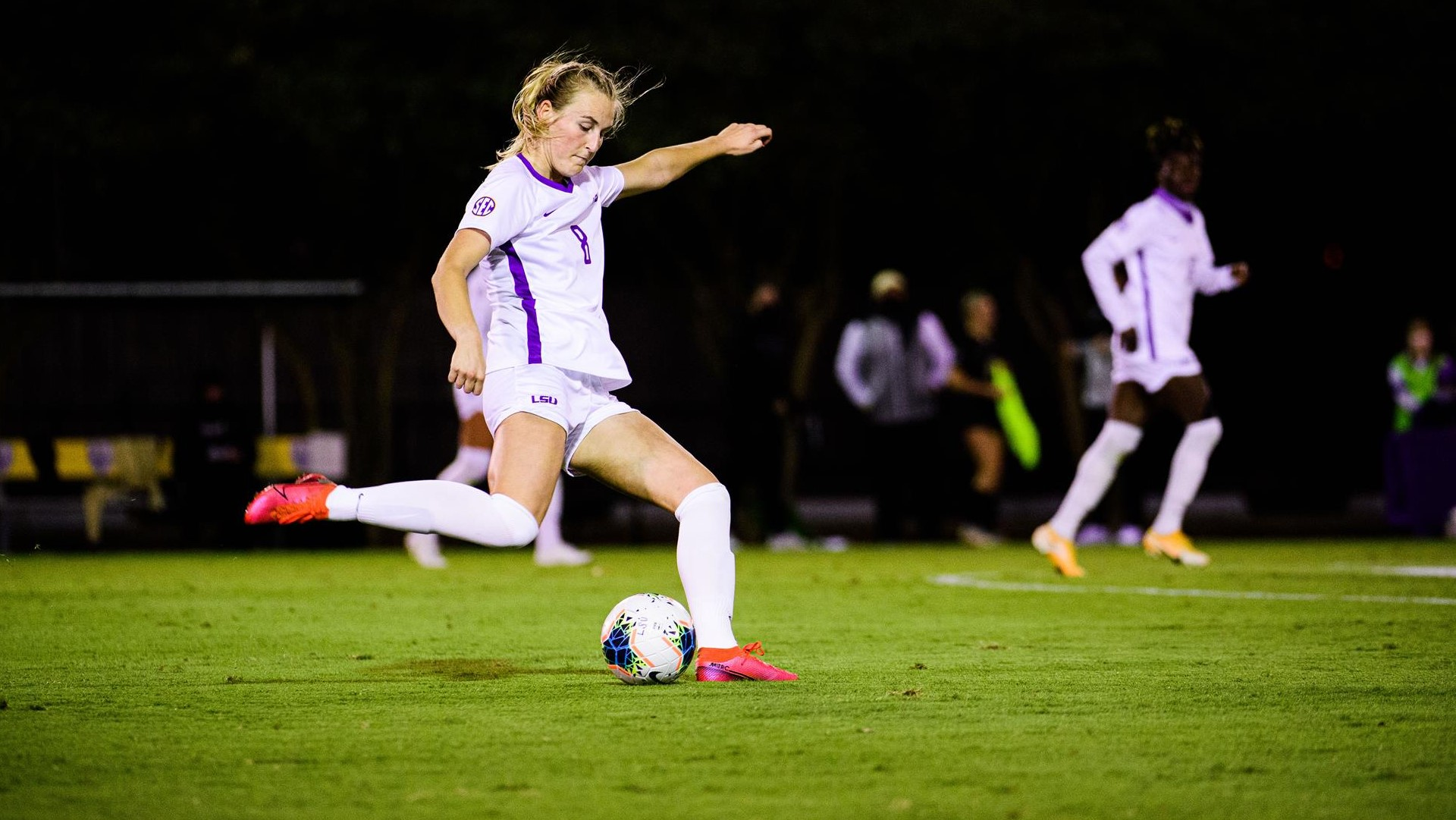 Waco, Texas – The LSU soccer team went in to Betty Lou Mays Field and handed Baylor its first home loss of the season on Thursday night with a 1-0 triumph on the road. It was Shannon Cooke’s goal in the 27th minute that served as the game winner. LSU moves to 7-8-3 on the season while Baylor drops to 3-4-3.

“Tonight was a solid team win,” head coach Sian Hudson said after the match. “We are getting better at finding different ways to win games. Once we settled down after the start we found our rhythym and were able to control large parts of the game with possession.

“I thought Rammie (Noel) put us in a lot of good positions in the first half. She’s so quick and crafty with the ball and she creates so much for us. Meghan (Johnson) played well in the midfield and did a number of good things for us tonight to help us win.”

The Bears came out on the attacking front and controlled play for the first 10 to 15 minutes before LSU changed the momentum. LSU outshot Baylor in the first half by a tally of 8-4 and made Baylor’s keeper, Jennifer Wandt, make three saves in the first 45.

It was Cooke’s goal in the 27th minute that wound up squeezing past the Wandt. Noel played a ball to the middle of the pitch for Cooke, who turned and faced up. Cooke took a dribble a smashed a one-hopper from about 30 yards out that wound up short hopping Wandt and trickling into the net. It was Cooke’s first goal of the season and third of her LSU career.

“Shannon was really on top of her game tonight from the centerback position,” Hudson noted. “She pushed up at times in the attack and it was good to see her get her first goal of the season.”

LSU leads 1-0 thanks to @shann_cooke‘s first goal of the season in the 27th minute! It’s the third goal of her career.

Cooke and sophomore goalkeeper Mollee Swift worked in unison all evening long en route to LSU’s fifth shutout of the season and fourth in the last seven matches. Swift made five saves on the night and none were bigger than her save in the 38th minute. Baylor’s Taylor Moon snuck behind LSU’s backline and Swift did a terrific job of coming off her line and cutting down the angle to preserve LSU’s 1-0 lead.

“I thought Swifty managed the game back there really well for us once again,” Hudson mentioned. “She worked really well with our backline and really made Baylor’s attackers work extra at times.”

38′ | @MolleeSwift closes down the angle and preserves LSU’s advantage!

The second half featured back and forth play and Baylor pressed up towards the backend of the match. Reese Moffatt played a well struck ball into the left side of the box for Meghan Johnson in the 77th minute but Johnson’s ensuing cross was headed away. Two minutes later Johnson took a rip on net from 22 yards out that was saved by Wandt.

Baylor’s last scoring chance of the evening came in the 84th minute when a loose, bouncing ball from eight yards out was struck by Giuliana Cunninghman, but Swift was there to save the mishit shot.

LSU (7-8-3) will stay in Texas and take on Texas Tech at 2 p.m. CT on Saturday. The game will take place in Dallas, Texas, at Texas Women’s University.