Top 10 Matchup This Weekend at "The Box" 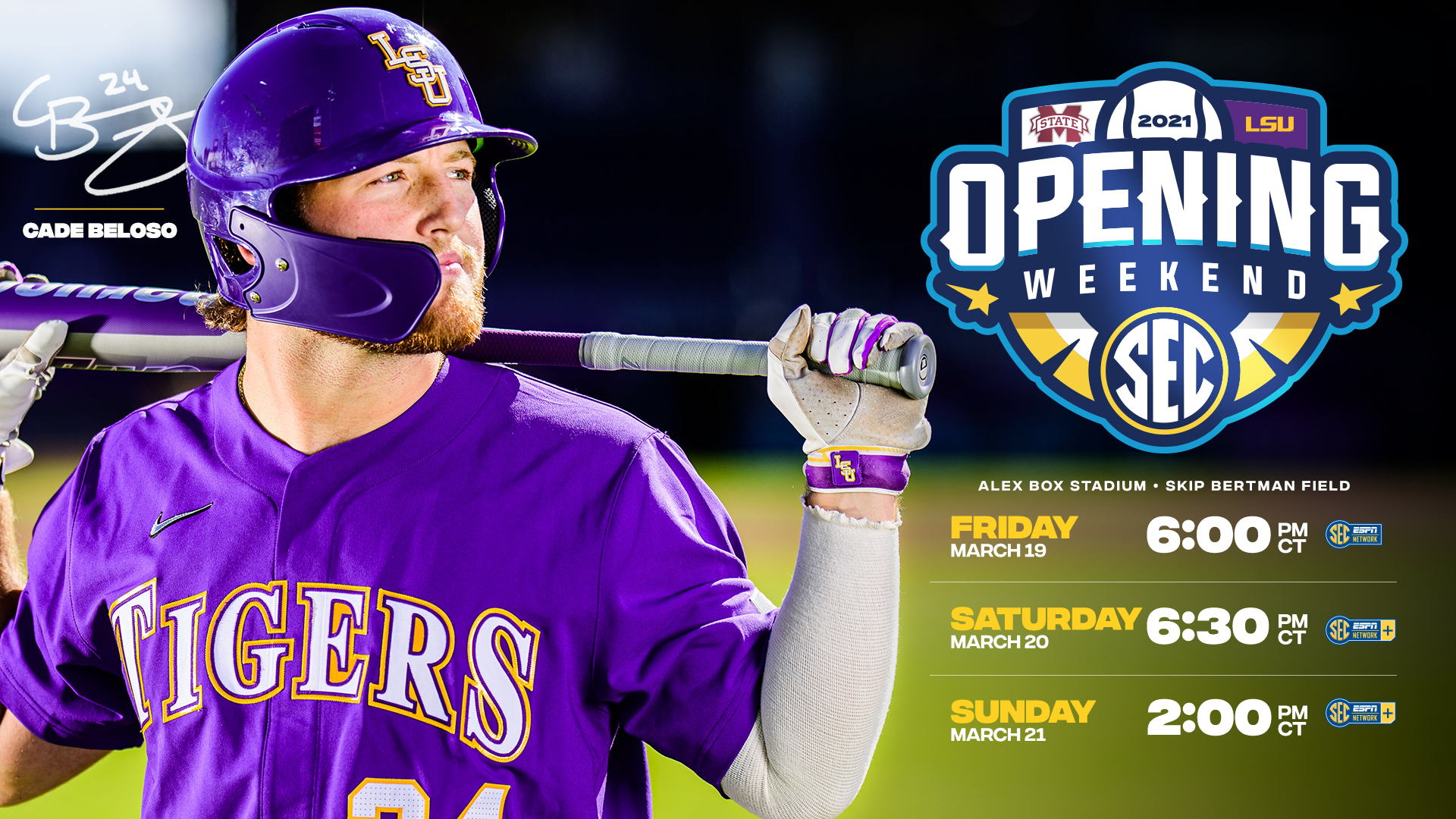 ONLINE
• Friday’s game will be televised by the SEC Network
• All three games may be viewed on SEC Network +, accessible at Watch ESPN.com and the Watch ESPN app

QUOTING PAUL MAINIERI
“There’s always been a great baseball rivalry between Mississippi State and LSU, especially since (former coaches) Ron Polk and Skip Bertman took over the programs in the late ’70s and early ’80s and turned them into powerhouses. Because it was such great baseball, fans started coming to the games, and the other SEC schools started to realize that a college baseball program could be self-sufficient financially. Now every program in the SEC has great resources, coaches and facilities. There’s something special about the LSU-Mississippi State rivalry, and I feel privileged to be a part of it. We’ve always enjoyed the competition with Mississippi State, and it will be hard to sleep tonight as we get ready to start the series on Friday.”

ABOUT THE TIGERS
• LSU is playing its first SEC regular-season series since May 16-18, 2019, versus Auburn, when LSU won two of three games in Baton Rouge.
• LSU has won six straight games, including a 10-7 victory over Southeastern Louisiana on Tuesday night … the Tigers posted a three-game sweep of UT San Antonio last weekend – Games 2 and 3 versus UTSA were walk-off wins for the Tigers, and LSU already has four walk-off wins this season.
• The Tigers have launched 14 homers during their six-game win streak and now have 35 dingers on the season, which is No. 1 in the nation.
• LSU blasted six homers in Sunday’s win over UTSA, marking the Tigers’ first six-homer game since March 2, 2008, versus Duquesne.
• LSU is No. 7 in the SEC in team batting average (.289), and the Tigers lead the league in home runs (35) … LSU is No. 3 in the SEC in runs scored (155), RBI (144) and total bases (334).
• Sophomore third baseman Cade Doughty was named SEC Player of the Week on Monday after he collected five home runs, six runs scored and 12 RBI in leading LSU to five wins in five games last week … Doughty was 7-for-21 at the plate with five walks and a .444 on-base percentage … he hit a three-run homer in the bottom of the 10th inning Saturday versus UT San Antonio to erase a 7-4 deficit and extend the game into the 11th inning … LSU went on to post a 10-9 victory in 13 innings … Doughty is batting .327 this season, and he leads LSU in home runs (7), RBI (22) and slugging percentage (.837) … Doughty is No. 2 in the SEC in home runs (7), RBI (22) and slugging percentage (.837)
• Freshman shortstop Jordan Thompson was named SEC Co-Freshman of the Week on Monday after he batted .381 (8-for-21) in five games last week and played a huge role in LSU’s extra-innings wins over UT San Antonio on Saturday and Sunday … Thompson launched a walk-off home run in the bottom of the 13th inning on Saturday to lift the Tigers to a 10-9 victory … on Sunday, with LSU trailing 12-9 in the bottom of the 10th inning, Thompson unloaded a one-out, two-run blast to narrow the deficit to 12-11 … LSU went on to tie the game in the 10th and win it in the 11th by a 13-12 score … during the five-game week, Thompson scored six runs, recorded three steals and posted a 1.000 fielding percentage in 20 chances.
• Freshman rightfielder Dylan Crews is tied for the SEC lead in base hits (28) with Jacob Young of Florida … Crews also leads the league in runs scored (25), on-base percentage (.539) and walks (18), and he is No. 3 in the conference in total bases (51) … Crews is hitting a team-high .406 on the year, which ranks fourth in the SEC.
• Junior right-hander Landon Marceaux is tied atop the SEC ERA rankings with Vanderbilt’s Kumar Rocker; both pitchers have a 0.00 ERA … Marceaux pitched six shutout innings Saturday versus UT San Antonio, and he recorded a career-high 11 strikeouts … Marceaux is No. 7 in the SEC with a .150 opponent batting average, and he is eighth in the league in strikeouts with 32.

ABOUT THE BULLDOGS
• Mississippi State is No. 10 in the SEC in team batting average, hitting .278 with 29 doubles, three triples and 16 home runs … the Bulldogs lead the league with 25 stolen bases in 30 attempts.
• Outfielder Tanner Allen and catcher Luke Hancock are MSU’s leading hitters, both batting .308 … Allen has two doubles, two homers and 16 RBI; Hancock has two doubles, five homers and 18 RBI … infielder Kamren James is hitting .286 and has contributed four doubles, four homers and 18 RBI.
• The MSU pitching staff is No.1 in the SEC with a 2.24 ERA and has recorded four combined shutouts … the staff is striking out a league-best 13.41 hitters per nine innings … MSU is No. 1 in the SEC with a .176 opponent batting average, and the Bulldogs have given up 10 home runs.