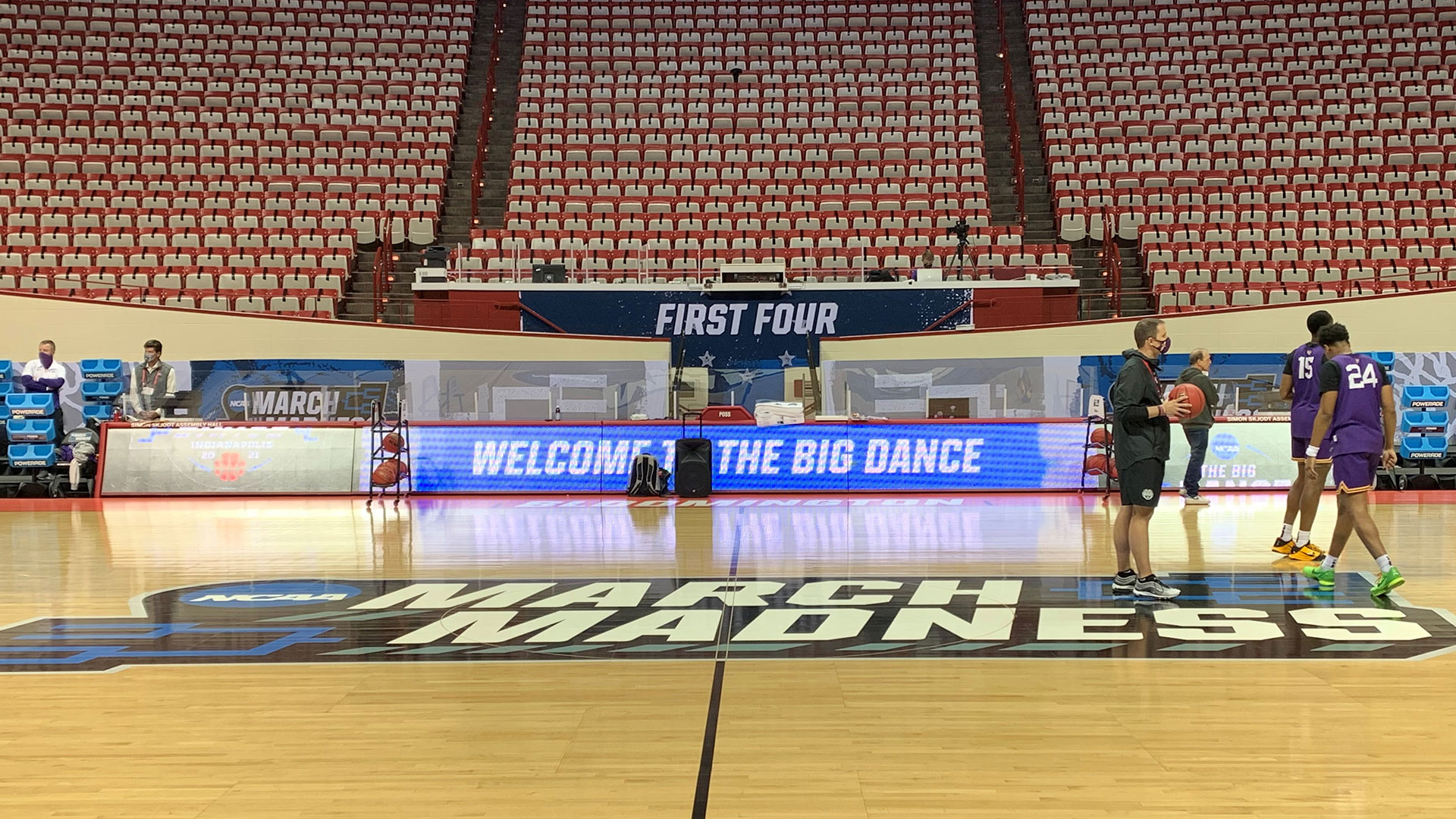 INDIANAPOLIS, Indiana – The LSU men’s basketball team began preparation for Saturday’s first round NCAA game with St. Bonaventure with a 90-minute practice at the game site, the Simon Skjodt Assembly Hall on the Indiana University campus in Bloomington.

The Tigers traveled in three busses with a police escort to the site for what will be LSU’s only practice at the game site which is the home of the Indiana Hoosiers. The building will host First Four games on Thursday and First Round games on Friday before LSU and St. Bonaventure play at 1:45 p.m. ET (12:45 p.m. CT) in a game televised by TNT and broadcast on the LSU Sports Radio Network.

The team did several drills in the early part of practice on both ends of the court before breaking down to 5-on-5 play working on several plays and sets led by Coach Will Wade. The team closed the practice with shooting drills.

LSU will practice early Thursday and late morning Friday at one of the practice courts set up in the Indiana Convention Center which is attached to the four hotels where the teams are staying.

Earlier in the day, Coach Wade participated in his pre-game media session and here are some of his comments:

On the ‘Bubble’ Experience…

“The NCAA has done a tremendous job. It’s been different, certainly. It’s been a different NCAA experience, but you won’t hear any complaining from LSU. We’re excited to be here. You can’t even get to the first floor of the hotel; they have barricades and police all around the hotel. The first time I’ll have stepped outside since we got here is when we leave to go to Bloomington for practice today. A couple of our people went to Victory Field, which is a baseball park right here. A couple of our people went and walked around this morning during an allotted time from 10 a.m. to 11 a.m. But, I mean, it’s certainly a different experience but it’s the NCAA Tournament. You’re playing still, you’re playing in March, so we’re not complaining about that at all.”

“He’s a monster. The one I compared him to was Larry Sanders, when I was an assistant at VCU and he ended up being a top-20 NBA draft pick. He was the defensive player of the month a couple of times in the NBA. He had some issues and he’s out of the league. Larry [Sanders] had a 7’7 wingspan, I think [Osunniyi] has a 7’8 wingspan. He’s a shot-blocking menace, a tremendous player, he’s athletic. He hit a late growth spurt, kind of like Larry [Sanders] did. That’s who I’d compare him to. We have some great shot-blockers in the SEC but [Osunniyi] is elite. He’s as good as I’ve seen in the country, I can’t imagine there’s anyone much better than him. It’s going to be a big challenge for us and he’s a huge reason why their defense and their team is so good.”

On how to adapt to St. Bonaventure’s pace of play…

“We’ll certainly address it. You’ve got to guard against frustration. They’re very deliberate. [Mark Schmidt] is an excellent basketball coach on the offensive and defensive end. For his offensive sets, he stirs you up for about 10 or 12 seconds to get to what he actually wants to get to. So, it’s really good offense, but more importantly for us, we have to defensive rebound the ball. If you guard them for 24 or 26 seconds and they miss the shot, you get to get that so you can go. If you give up another possession, they may just kick it out and run the clock again for another 20 seconds. If we’re not careful and we’re not disciplined, we could end up playing defense for 32 minutes and play offense for eight minutes on Saturday. We’ve got to be very disciplined on what we’re doing defensively. Also, offensively we take some tough shots, but we take some tough shots because we give our guys a lot of confidence. We give our guys some freedom on the offensive end, but we also do it knowing that we’re going to be playing 73 to 75 possessions a game. They haven’t played a 70-possession game since early January.  It’s not just on the defense front, we’ve got to be more cautious offensively with what we do and the shots we take and make sure that we’re taking great shots each time.”