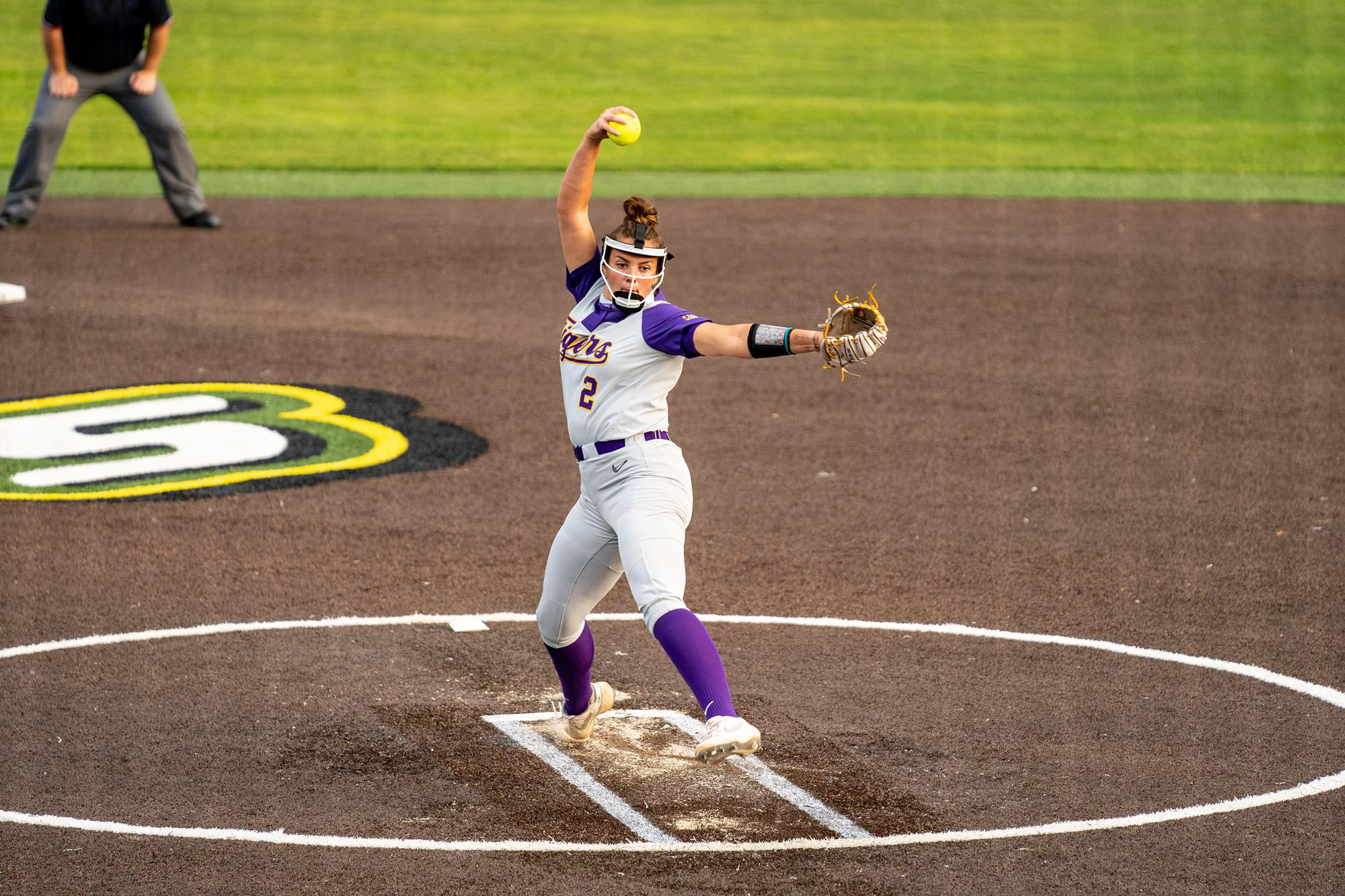 HAMMOND, La. – The No. 12 LSU Softball team defeated Southeastern Louisiana, 12-1 Tuesday night at North Oak Park in Hammond, La. The Tigers improve to 16-7 on the year while the Lions drop to 12-11.

LSU will return to SEC action at Tiger Park Saturday through Monday for a three-game series with Texas A&M. Saturday’s game will start at 6 p.m. with Sunday’s game at 5 p.m. and Monday’s game at 6 p.m.

The Tigers got out to an early lead in the first inning. Taylor Pleasants drew a walk and Amanda Doyle was hit by a pitch. Shelbi Sunseri draw another walk with one out to load the bases for Georgia Clark. Clark hit a double off the left center wall to score Pleasants and Doyle, taking a 2-0 lead.

Another run came across in the second as Ali Newland drew a walk. Two outs later, Pleasants single through the right side to score Newland, extending the Tigers’ lead to 3-0.

After a scoreless third, the Tigers put two more up on the board with two outs in the fourth. With the bases loaded, Doyle hit a ball up the middle that tipped off the second baseman’s glove to score two, pushing the Tigers’ lead to 5-0. Clark was hit by a pitch with bases loaded, bringing in Pleasants for the sixth run of the game.

Southeastern got on the board in the fourth as the Lions scored an unearned run off a fielder’s choice to the shortstop.

The Tigers answered that run in the top of the fifth as Morgan Cummins hit a solo shot over the centerfield wall. Newland followed with a double to centerfield and advance to third and scored on Aliyah Andrew’s fly ball to right field, giving the Tigers a 8-1 lead into the bottom of the fifth.

LSU continued their offense as they scored four in the seventh on an inside-the-park grand slam from Raeleen Gutierrez.

Ali Kilponen earned the win in circle, improving to 4-3 on the year. She finished the game with five strikeouts, all looking. Morgan Smith made an appearance in the seventh to close out the game.

“Well, I think they are a really good team, Southeastern has played some people that are really tough this year and we knew that coming in. I think it’s also important for our girls to represent the state of Louisiana, they know a lot of these girls, they’ve played travel ball with a lot of them, so I think it’s important to them too. They were ready for today, I don’t think they took it lightly, I don’t think they looked past it, they wanted this game and were excited about it.”

“I think she did a good job I thought she had some challenges; I think playing on the turf is different than the stuff we’ve done before. You know she’s one of those kids that puts her hand in the dirt, so I think it was a little tough for her to get going but I thought she battled through it and did a good job of keeping us in it.”

On preparing to play on turf fields…

“We do have to prepared for it, it’s something we don’t see very often. Luckily, we have our indoor facility, so we were able to take some ground balls on that trying to feel it. I said the young players looked better on turf because they probably played on it growing up where the older players didn’t get the opportunity.”

“I thought it was good, she’s been putting in a lot of time so it’s good to see her have a moment like that. I know she means a lot to this team in so many different ways so it’s really important for her to get to swinging again and swinging well so I was happy to see it.”

Getting ready for this weekend…

“It’s nice that we have the series Saturday, Sunday, and Monday this week, so we get three really good days of practice. We get to do a lot of things to prepare, Texas A&M is going to bring a really solid softball team with a great pitching staff. I think they bring a solid offense but luckily we have three days to go back to Tiger Park to get ourselves in order and to play the best version of LSU softball that we can.”