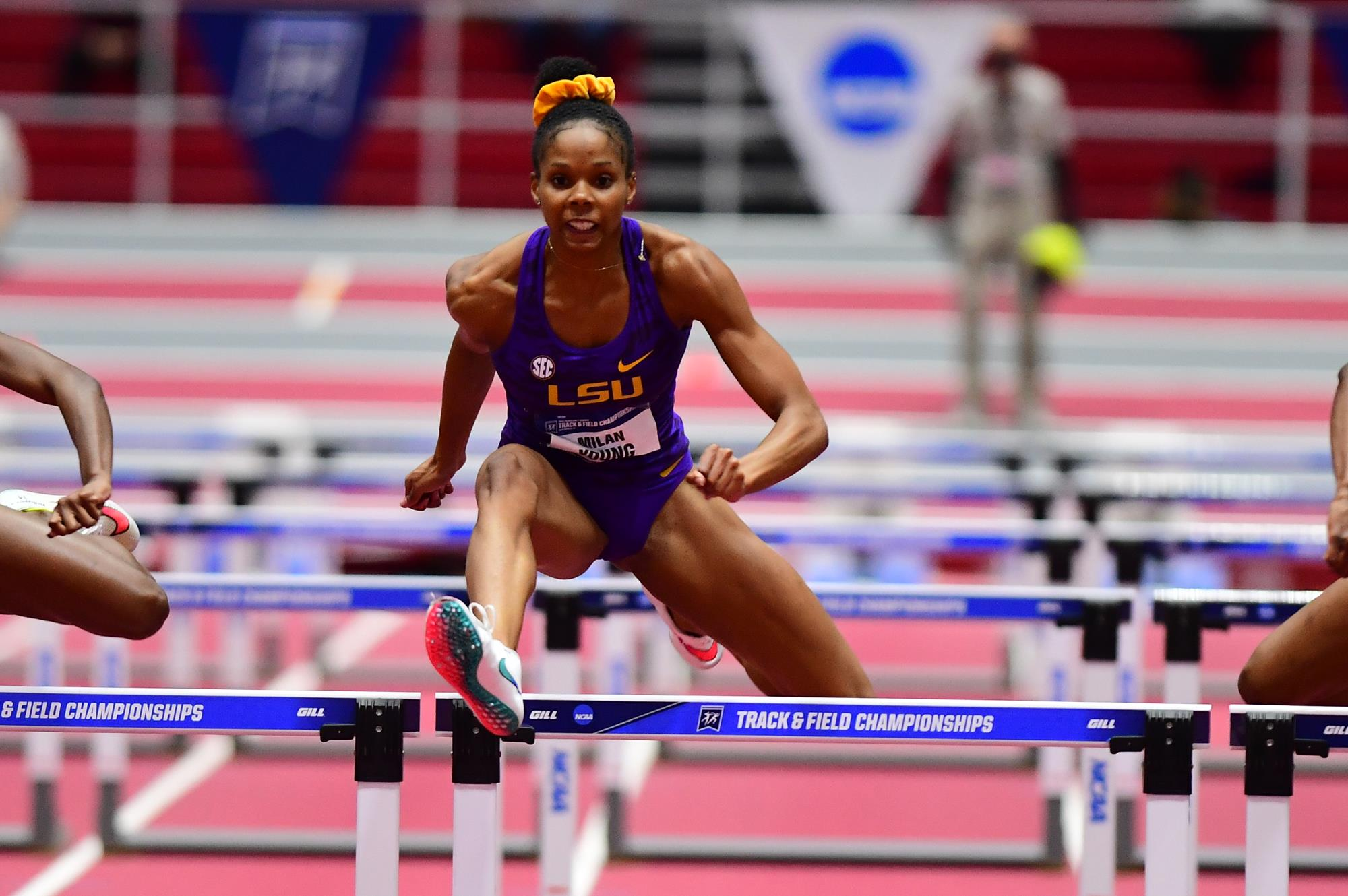 Baton Rouge, La. – Eighteen LSU track and field received All-America honors for their performances at the NCAA Championships. Thirteen of them were named First Team All-America for finishing within the top eight of their respective events.

The field athletes put together some record-breaking performances on their way to finishing in second place on the men’s side and third place on the women’s side at the NCAA championships.  JuVaughn Harrison became the third male athlete to win both the high Jump and long Jump events at the NCAA Indoor Championships.  Harrison started the weekend off with a clearance of 7′ 6.5″ (2.30 meters) to win the high jump championship.  His clearance ties a school record, ranks as the best mark in the country, and is currently the sixth best in the world.  Harrison wasn’t finished though as mere hours later he took the gold medal in the long jump event.  The record-breaking senior leaped a distance of 27′ 8.75″ (8.45 meters) which extended his school record mark in the event.

Harrison wasn’t the only field athlete to receive first team honors from the NCAA as five more LSU competitors did the same.  Lisa Gunnarsson became the first female to win the NCAA pole vault event for LSU as she cleared a height of 14′ 11.5″ (4.56 meters) to extend her school record.  Abigail O’Donoghue and Nyagoa Bayak both garnered first team All-America honors for their performances in the high jump.  O’Donoghue placed fourth with a clearance 6′ 0.5″ (1.84 meters) on her first attempt at the height while Bayak cleared the same height on her third attempt.  Aliyah Whisby registered a fourth place finish in the long jump with her leap of 21′ 10.25″ (6.66 meters), earning first team All-America honors.  The freshman jumper, Sean Dixon-Bodie, leaped out to a distance of 54′ 5.25″ (16.59 meters) to place fifth in the triple jump.

The sprinters also provided many contributions to the team scores at the NCAA Championships as they had multiple event winners.  Damion Thomas won the 60 meter hurdles event with a personal best and school record time of 7.51.  Eric Edwards Jr. placed fifth in the same event, running a time of 7.58 to earn First Team All-America honors.  On the women’s side, Milan Young registered a fifth place finish with a time of 8.06 to earn honors in the 60 meter hurdles.

Noah Williams was the champion of the 400 meter dash as he clocked a time of 44.71.  Williams shattered his previous school record of 45.26 to take the gold and gain possession of the world lead.  Amber Anning also found success in the 400 meter dash as she placed fifth with a time of 51.83, earning honors.  Terrance Laird and Favour Ofili both earned honors for their top five performances in the 200 meter dash.  Laird ran a time of 20.20 to claim the silver medal while Ofili clocked a readout of 22.96 to place fifth.  The final event that resulted in first team honors for the Tigers was the women’s 4×400 meter relay where a team consisting of Amber Anning, Symone Mason, Favour Ofili, and Milan Young ran a time to place fourth.