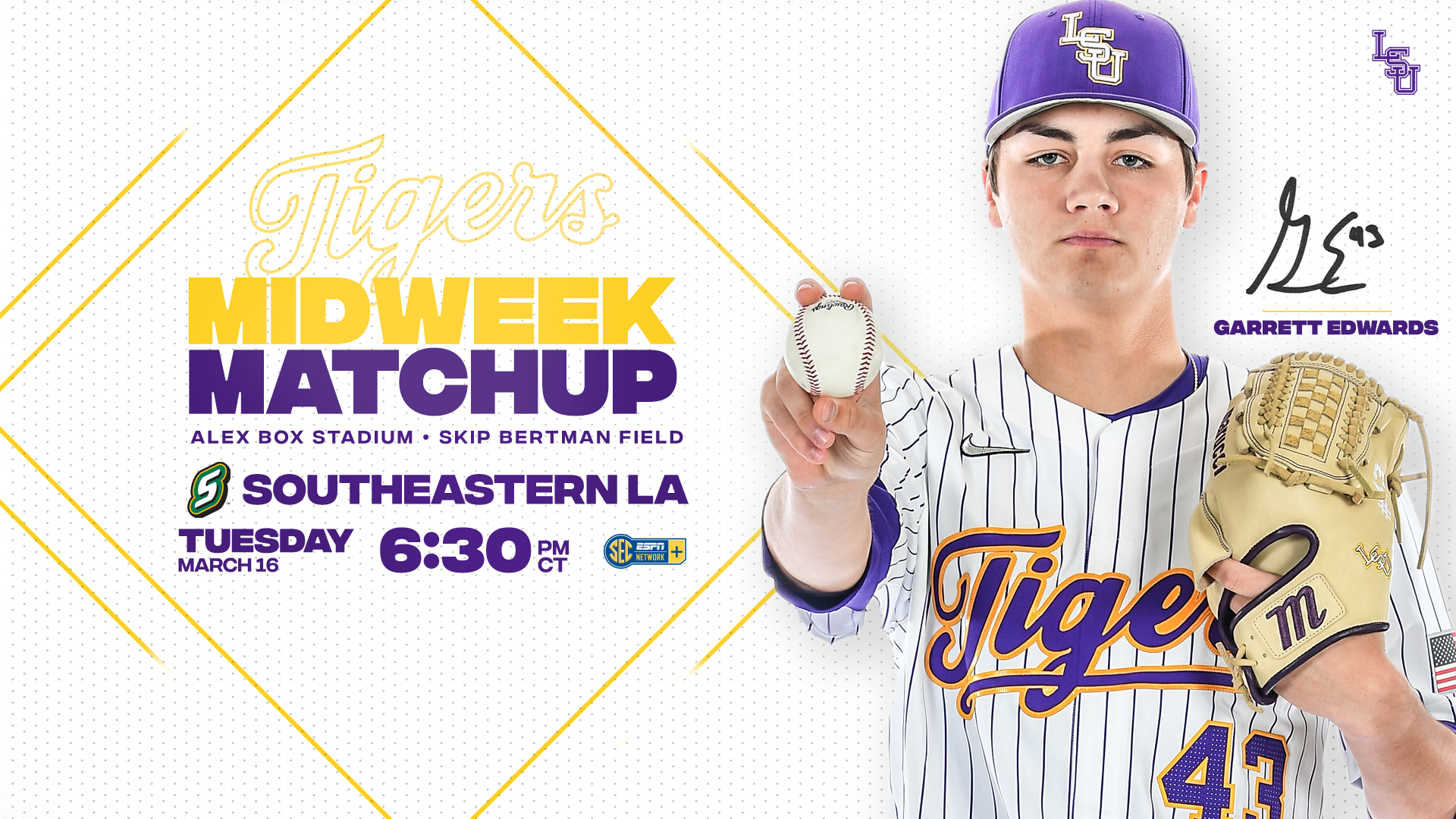 SERIES RECORD VS. SOUTHEASTERN LOUISIANA
LSU leads Southeastern Louisiana, 72-18, in a series that began in 1937, and the Tigers have won 26 of the last 28 meetings between the schools. The Tigers posted a 6-3 win over the Lions last season (March 3) in Baton Rouge. LSU has a 45-4 mark against Southeastern Louisiana since 1990.

QUOTING PAUL MAINIERI
“Southeastern Louisiana is having a good year; they’re playing everybody very tough, and they’ve won a lot of games. We’re going to have our hands full on Tuesday night. Our pitching staff is a little bit tired since we’ve had two straight five-game weeks. Having only one midweek game from now on will help us to get fresh again. Will Hellmers is going to start for us, and I’m not sure how long we’re going let him go. We’ll need to decide if we want to save him for the weekend as a reliever, or just let him go and give us the best chance to be successful on Tuesday night.”

ABOUT THE TIGERS
• LSU won all five of its games last week, including a three-game weekend series sweep of Texas-San Antonio … Games 2 and 3 versus UTSA were walk-off wins for the Tigers, and LSU already has four walk-off wins this season.
• The Tigers launched 12 homers in five games last week and now have 33 dingers on the season … the last time LSU had 33 home runs after 17 games was in the 2009 season.
• LSU blasted six homers in Sunday’s win over UTSA, marking the Tigers’ first six-homer game since March 2, 2008, versus Duquesne.
• Sophomore third baseman Cade Doughty collected five home runs, six runs scored and 12 RBI in leading LSU to five wins in five games last week … Doughty was 7-for-21 at the plate with five walks and a .444 on-base percentage … he hit a three-run homer in the bottom of the 10th inning Saturday versus UT San Antonio to erase a 7-4 deficit and extend the game into the 11th inning … LSU went on to post a 10-9 victory in 13 innings … Doughty is batting .327 this season, and he leads LSU in home runs (7), RBI (22) and slugging percentage (.837) … Doughty is No. 2 in the SEC in home runs (7), RBI (22) and slugging percentage (.837)
• Freshman shortstop Jordan Thompson batted .381 (8-for-21) in five games last week and played a huge role in LSU’s extra-innings wins over UT San Antonio on Saturday and Sunday … Thompson launched a walk-off home run in the bottom of the 13th inning on Saturday to lift the Tigers to a 10-9 … on Sunday, with LSU trailing 12-9 in the bottom of the 10th inning, Thompson unloaded a one-out, two-run blast to narrow the deficit to 12-11 … LSU went on to tie the game in the 10th and win it in the 11th by a 13-12 score … during the five-game week, Thompson scored six runs, recorded three steals and posted a 1.000 fielding percentage in 20 chances.
• Freshman rightfielder Dylan Crews is tied for the SEC in base hits (27) with Jacob Young of Florida … Crews also leads the league in runs scored (24), and he is No. 2 in the conference in total bases (49), walks (16) and on-base percentage (.536) … Crews is hitting a team-high .409 on the year, which ranks fourth in the SEC.
• Junior right-hander Landon Marceaux is tied atop the SEC ERA rankings with Vanderbilt’s Kumar Rocker; both pitchers have a 0.00 ERA … Marceaux pitched six shutout innings Saturday versus UT San Antonio, and he recorded a career-high 11 strikeouts … Marceaux is No. 7 in the SEC with a .150 opponent batting average, and he is eighth in the league in strikeouts with 32.

ABOUT THE LIONS
• Southeastern Louisiana enters Tuesday’s matchup on an eight-game win streak, including a four-game Southland Conference sweep of Sam Houston State last weekend.
• SLU is batting .318 as a team with eight homers and 28 steals in 34 attempts … sophomore infielder Jacob Burke is the Lions’ leading hitter, batting .385 with six doubles, one triple, two homers, nine steals and 17 RBI … Burke was a baseball and football teammate of LSU freshman infielder Will Safford at University High School in Baton Rouge.
• The SLU pitching staff boasts a 2.93 ERA and has recorded three combined shutouts … the staff has allowed eight homers on the year and limits opponents to a .227 batting average.