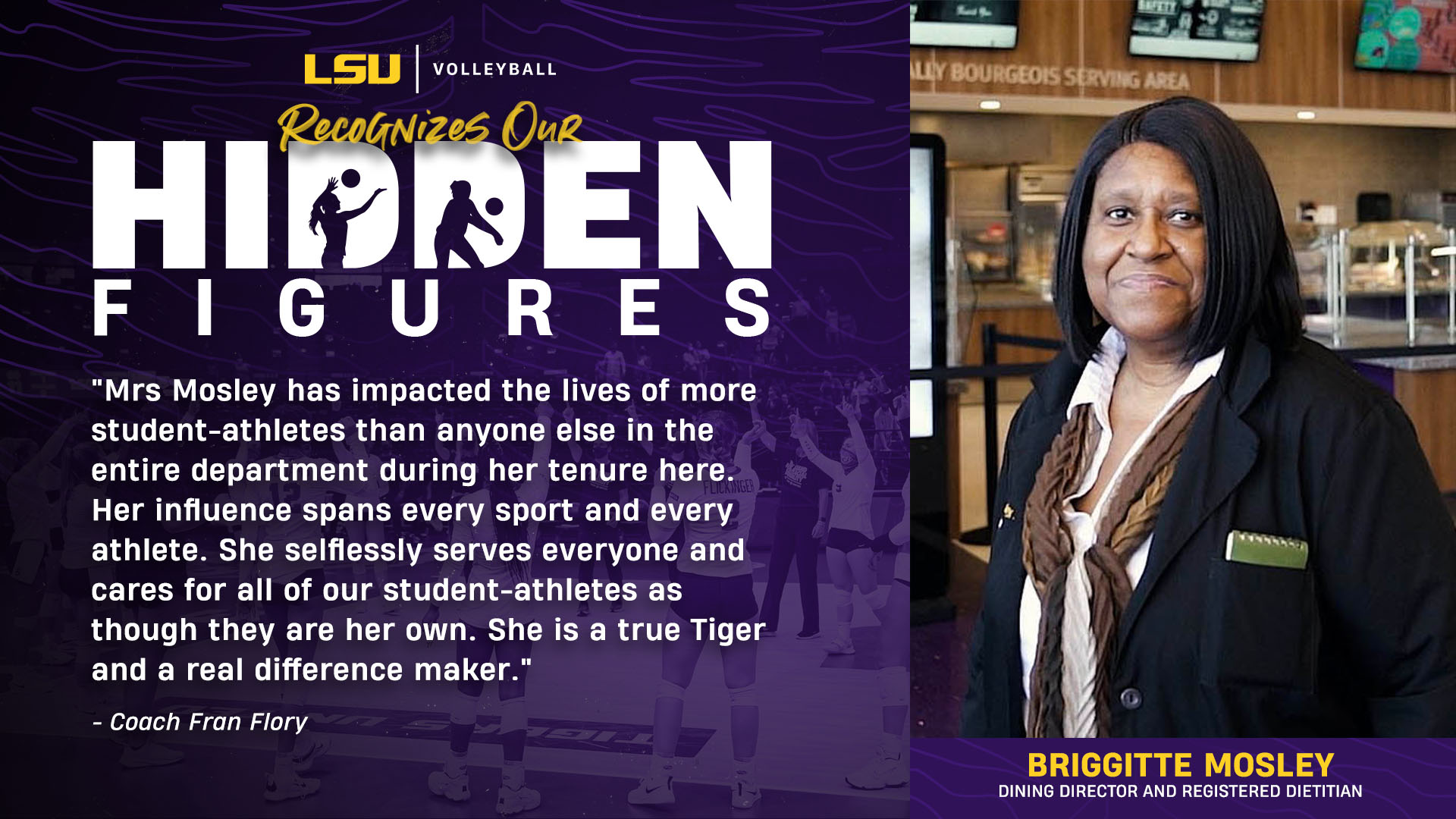 Selfless, humble and impactful are just a few of the words that have been used to describe Briggitte Mosley and her lengthy tenure at LSU.

Known as Ms. Mosley by all of the athletes that she sees every day at the nutrition center as a director of athletic dining, she has been an LSU fixture for 38 years, including the entire tenure of Volleyball head coach Fran Flory. Mosley has helped the LSU athletic nutrition program grow greatly.

A North Louisiana native, Mosley attended Louisiana Tech for her undergraduate degree and went on to receive her masters from LSU. Working with LSU athletics was her first job, one that she feels lucky to have been able to land, falling in love with the craft and the opportunity to build the relationships she has.

“I love being around athletics,” Mosley said. “I like that the athletic world changes constantly. It’s not routine. Over the course of these years, I’ve had thousands of athletes.”

When Mosley began with LSU athletics and nutrition, the department worked out of Broussard Hall and then the Five Dining Hall on campus. After 20 years of hard work, the department’s facility and resources were updated in 2000.

“I could not wait for the new facility to come along,” Mosley explained. “It’s been great to see it come full circle.”

“Mrs. Mosley has impacted the lives of more student athletes than anyone else in the entire department during her tenure here,” Flory said. “Her influence spans every sport and every athlete.  She selflessly serves everyone and cares for all of our student athletes as though they are her own. She is a true Tiger and a real difference maker.”

It’s Mosley’s personal touch that has made her tenure at LSU so impactful with the volleyball.  She strives to make every interaction with the student-athletes as impactful as possible, helping their physical health and morale.

“It’s kind of like having mom,” Flory explained, “just to interact with and to say hi to and to get that extra little love from every time they go to eat. I think the depth of her impact throughout the entire department is probably the deepest of anybody in the department, in terms of her connections to student-athletes.”

Mosley does her best to treat the athletes as her own children. She strives to reflect values of politeness and positivity and ensure that athletes do an excellent job representing LSU.

Her charm has survived the test of time at LSU,  and she is an open book with her LSU stories.

“She’s a vault of LSU stories,” Flory said. “I don’t know that there’s a truer employee that has been at LSU. She stood by, she stood beside, in front of, and behind just about every student athlete and volleyball player that’s been here.”

Ms. Mosley provides so much for the Tigers’ volleyball team. She will always be there to represent the best LSU has offer, and her impact will go long past what is seen on the surface. That love for athletics and her craft is what makes her special and a backbone to LSU athletics.

“She is truly the ultimate hidden figure at LSU,” said Flory.