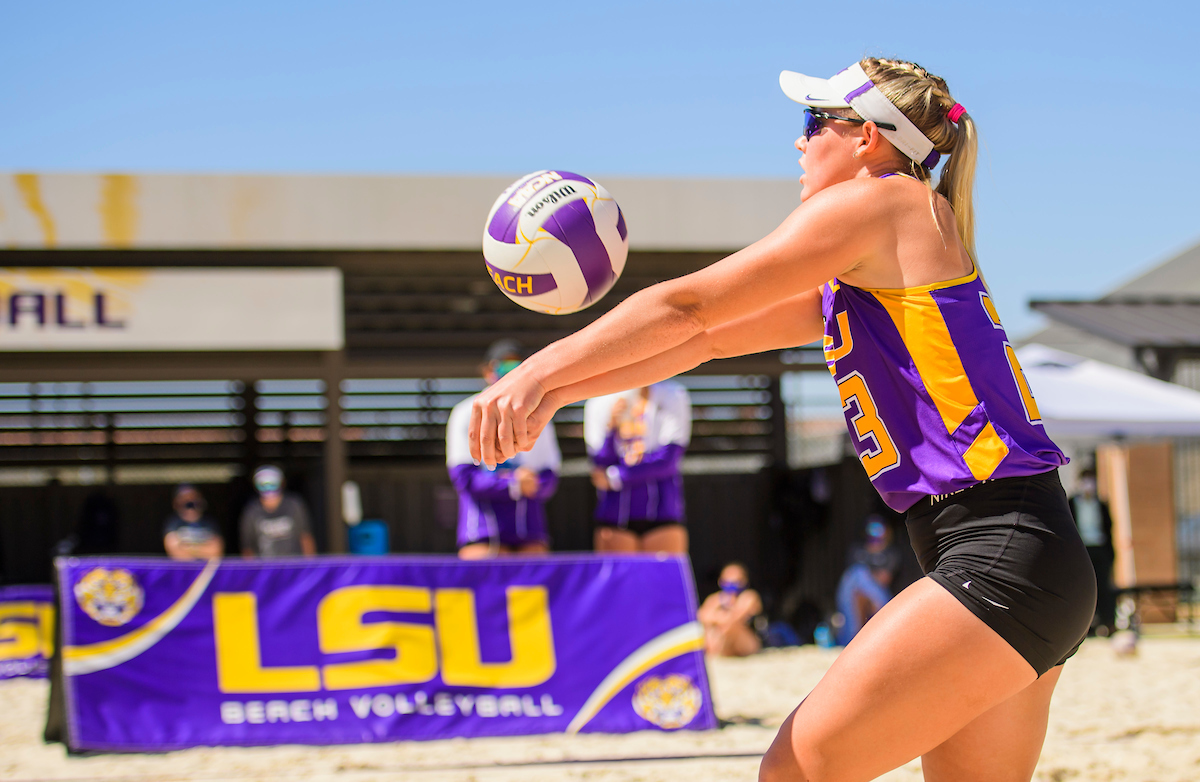 GULF SHORES, Ala. – Facing wind conditions on the sands of Gulf Shores, the No. 3 LSU Beach Volleyball team won all three of its matches against No. 20 Tulane, No. 11 Grand Canyon and UAB to close out play at the March to May.

LSU rebounded after dropping a down to the wire match Saturday evening against No. 2 Florida State. The Tigers opened the day early against Tulane followed immediately against Grand Canyon before a slight break until its match against UAB. LSU won the first two matches 4-1 and swept the last match over UAB.

“I loved the effort today,” said head coach Russell Brock. “It would have been real easy to muddle our way through today after a late finish last night. I’m really proud of how everyone came to work today and took care of business. It was a long day with three solid matches in windy conditions and we were focused all the way through.”

The first match of the day in Gulf Shores was LSU against Tulane and it was the Green Wave that got on the board first. On Court 4, LSU’s Jess Lansman and Sydney Moore struggled to get rolling as they fell in straight set, 21-18 and 21-14. Olivia Ordonez and Kahlee York evened the match for LSU though, winning Court 5, 22-20 and 21-19.

Taryn Kloth and Kristen Nuss had no issues on Court 1, 21-13 and 21-16. Toni Rodriguez and Ashlyn Rasnick-Pope won the first set on Court 3, 21-16. They had to battle in the second set, but ultimately won that 26-24 to clinch the overall match for LSU over Tulane. Claire Coppola and Kelli Greene-Agnew dropped their first set on Court 2, 24-22, but responded over the next two sets two get the comeback, 21-15 and 15-9.

Just moments after Coppola and Greene-Agnew wrapped up their match against Tulane, LSU had Courts 4 and 5 going in its match against Grand Canyon. Ordonez and York once again had no issues on Court 5, 21-14 and 21-11. Lansman and Moore fell once again on Court 4 in a tight match. The dropped the first set, 21-15, but came away with a tight 22-20 set two win to dorce a third. There the LSU duo fell though, 15-7, as GCU evened the overall match.

After a few hours to rest up, the Tigers were back in the sand for their final match of the weekend against UAB, the tournament’s official host. Grace Seits replaced Jess Lansman on Court 4 to team up with Moore.

Rodriguez and Rasnick-Pope made ultra-quick work in the first set on Court 3, 21-5. They faced slightly more resistance in the second set, but ended up taking it 21-14, to clinch the match for LSU.

Kloth and Nuss also did not have many issues and they remained undefeated for the year on Court 1, 21-12 and 21-11. Coppola and Greene-Agnew completed the sweep to finish the weekend for the Tigers on Court 2, 21-16 and 22-20.

The Tigers will be home once again next weekend for the LSU Beach Invitational on Saturday and Sunday.

“There’s no doubt we are continuing to get better,” said Brock. ” I can’t wait to get back to work this week before another great weekend at home.”