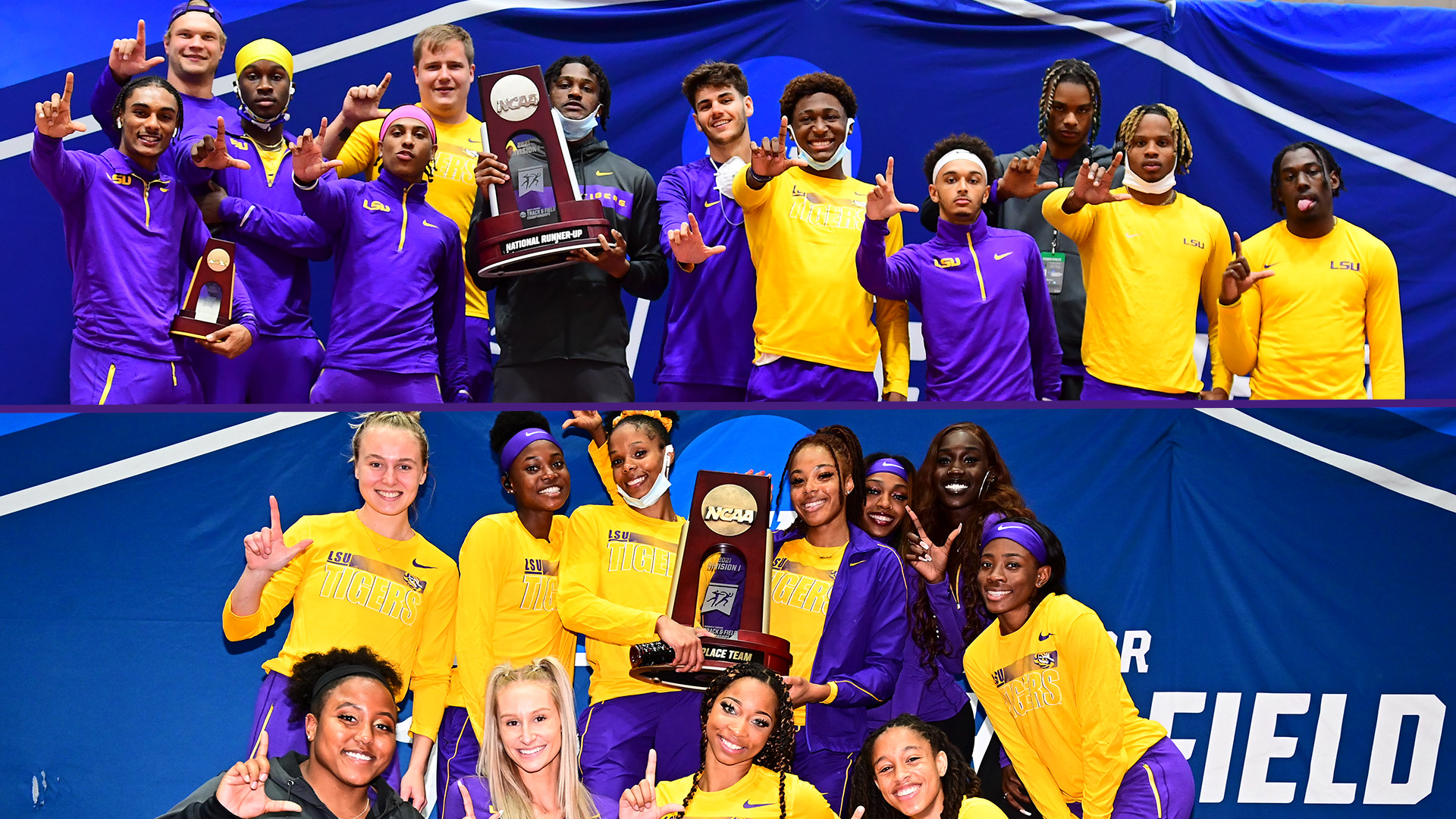 Fayetteville, Ark. –  The LSU men registered a runner up finish and the LSU women placed third overall on Saturday to conclude the 2021 NCAA Indoor Track & Field Championships at the Randal Tyson Track Center. The pair of top-three finishes by the men and women made LSU the only school with women’s and men’s teams on the podium.

“We came here to compete and I thought we did a very good job of that,” LSU head coach Dennis Shaver said. “We’re bringing two team trophies home with us and we had four athletes win individual national titles.

“On top of that 11 of our athletes PR’d at this meet which I can’t ever remember happening, so I’m very proud of our student-athletes. We can’t wait for outdoors to get going; we get some big pieces back that weren’t allowed to compete in indoors and we’re excited to see what we can accomplish together as a program outdoors.”

LSU had two more athletes capture national titles on Saturday with Noah Williams winning the 400 meters and Damion Thomas winning the 60 meter hurdles. All five male athletes that competed on Saturday registered personal bests in their respective events. The men’s team score of 56 points marks the most points scored by the LSU men at a indoor national meet in school history, and it’s the best finish by the men since 2006. The four individual event titles won by the LSU men are the most in school history as well at the indoor national meet – Williams (400 meters), Thomas (60 meter hurdles), and the JuVaughn Harrison x2 (high jump/long jump).

The 39 points scored and third place finish by the women mark LSU’s best finish at the meet since 2013 when they took third as well. Lisa Gunnarsson became the first woman in school history to win a pole vault national title on Friday night and seven individuals ended up scoring at the meet.

Williams clocked a time of 44.71 in the 400 meters to win his first career NCAA title. It made him the third fastest performer in collegiate history, No. 4 on the all-time world indoor list, and also broke his own previous LSU school record of 45.26 that he ran two weeks ago to win the SEC title. He becomes the first man from LSU to win the 400 meter indoor title since Vernon Norwood in 2015.

“It means a lot to be up there near the top of the world indoor list of all-time,” Williams said after the race. “It was my most efficient race of my career and everything came together. I felt a little comfortable coming through the 200 but then I got pushed a bit by (Bryce) Deadmon  and that actually helped get into my rhythm and from there it was over.”

Less than five minutes after Williams’ triumph in the 400 meters, the hurdling duo of Thomas and Eric Edwards Jr. collected 14 team points for the Tigers with first and fifth place finishes, respectively. Thomas hurdled his way to a PR of 7.51 for the gold medal and Edwards Jr. PR’d with a readout of 7.58 for fifth place. The times of 7.51 and 7.58 make Thomas and Edwards Jr. the fastest pair of collegiate hurdlers to run together from the same team. Thomas’ time of 7.51 also makes him the eighth best performer in collegiate history and it broke Barrett Nugent’s school record of 7.55 that was set in 2012.

“The race was a blur to me,” Thomas said after the quickest time of his life. “Honestly, that might have been one of the best starts of my career. I usually take a bit longer to get going, but I came out smooth and everything clicked. I cleared a few hurdles and then did my best to get to the finish line. It took a bit for them to get the results sorted, so those were anxious moments, but when I saw my name pop up first it felt unbelievable.”

The fastest duo in collegiate indoor history to run together. Can’t wait to see what they accomplish outdoors.#GeauxTigers pic.twitter.com/rcZbXiyekg

Terrance Laird nearly made it a third title for the LSU men within a span of 30 minutes in the 200 meters. He ran the fastest time of his life, a 20.20, but he was narrowly outleaned at the finish line by Matthew Boling (20.19) of Georgia. The time of 20.20 lowers Laird’s previous school record of 20.28 and makes him the seventh fastest sprinter over 200 meters in collegiate history.

Sean Dixon-Bodie leaped out to a massive personal best of 54′ 5.25″ (16.59 meters) in the triple jump to collect a fifth-place finish. Dixon-Bodie closes his indoor freshman season as the fifth-best triple jumper in LSU history. The men’s 4×400 meter relay of Williams, Dorian Camel, Charles Lewis, and Sean ‘Squirrel’ Burrell wrapped up the NCAA meet with a time of 3:08.49 to place 10th.

The women had three individual scorers on Saturday plus a 4×400 meter relay that finished fourth to score points as well. Amber Anning made the most of her NCAA debut over 400 meters as she clocked a time of 51.83 to place fifth overall. The time of 51.83 makes her the second fastest quarter miler in LSU history, and it’s the 12th fastest time ever run by a British athlete.

Milan Young placed fifth in the finals of the 60 meter hurdles in her individual NCAA debut with a readout of 8.06, and freshman Favour Ofili closed out her first indoor season with a sixth-place showing in the 200 meters (22.96).

When people look at Davis Bove, often their first thought is, “How does he do all of that?” For them, it seems impossible. For him, nothing is.
Five Former LSU Athletes, Coaches Named To 2023 Class Of Louisiana Sports Hall Of Fame