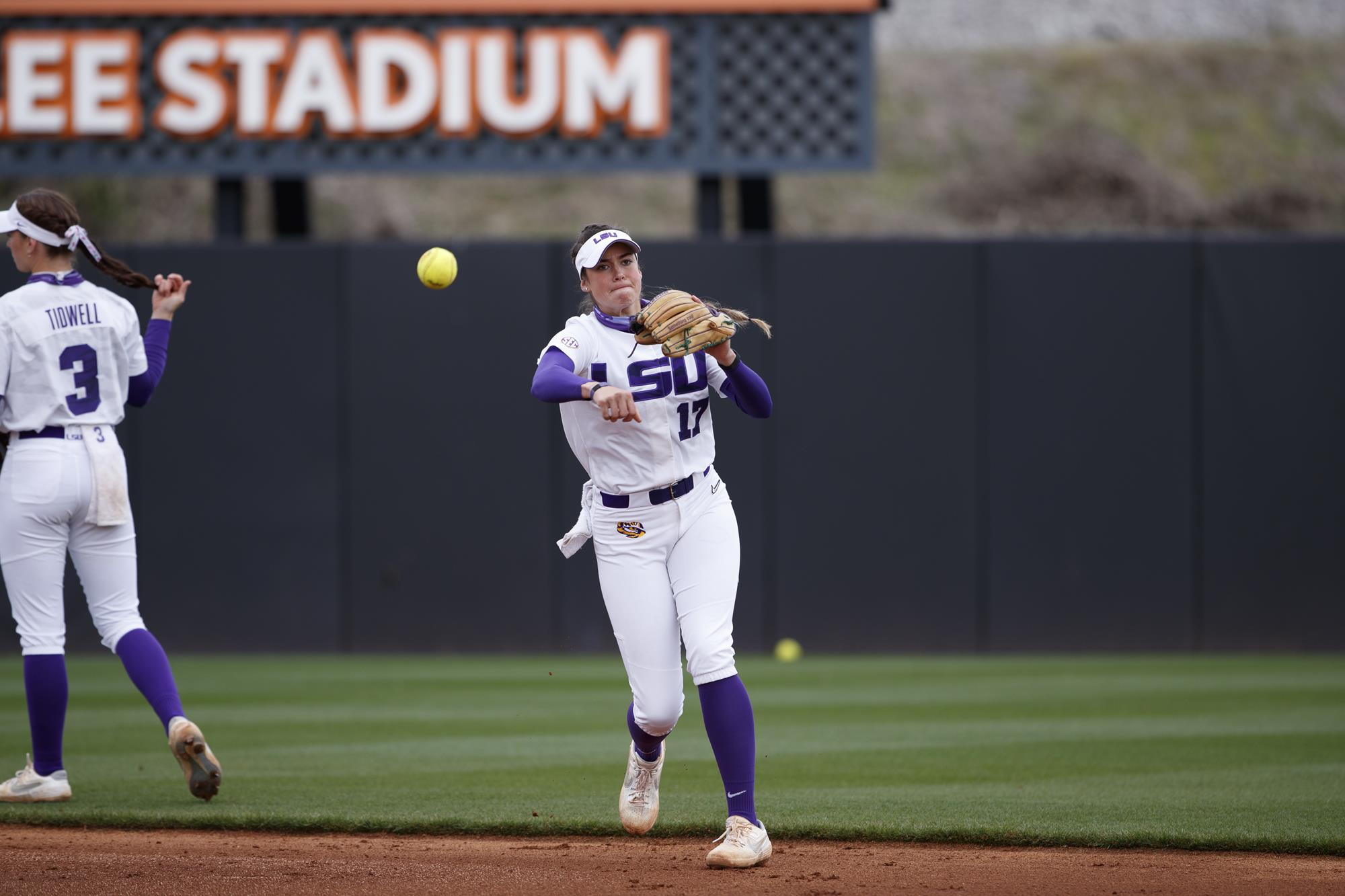 The Tigers will go for the series Sunday as the two teams meet at noon CT/1 p.m. ET. The game will stream live on SEC Network+.

The Tigers had runners on in the first two innings as Amanda Doyle doubled with two outs in the first. Georgia Clark doubled in the second and Morgan Cummins reached on a hit-by-pitch but the two were left on as a strikeout ended the inning.

LSU’s starter Shelbi Sunseri kept Tennessee off balance in the first inning. Tennessee came out swinging in the second as the first two batters of the frame singled. Sunseri and the Tigers put down the next three in order to get out of the jam.

After two more scoreless innings on both sides, the Tigers got on the board in the fifth. Cummins was hit-by-a-pitch again. Akiya Thymes came in to pinch run. She moved to second on a Taylor Tidwell sacrifice bunt. Aliyah Andrews singled to the pitcher and Thymes scored on the throw that was dropped at first, giving the Tigers a 1-0 lead.

Tennessee answered in the sixth with a solo home run over the left center wall, tying the game up at 1-1. The Tigers made a change in the circle as Ali Kilponen came in and got the Tigers out of the inning.

After a scoreless seventh, the Tigers took a 2-1 lead after Taylor Pleasants smashed a ball in the right field bleachers, her fifth on the year.

Kilponen earns the win in the circle, improving to 3-2 on the year. She finished with three strikeouts. Sunseri allowed one run on six in her five innings of work to go along with four strikeouts.

The top three in the lineup, Andrews, Pleasants and Doyle, each had a hit for the Tigers. Clark was the only other Tiger with a hit.

Tennessee got out to a 2-0 lead in the first inning as LSU’s starter Maribeth Gorsuch gave up two-run home run.

After a scoreless second, the Tigers got on the board in the third after Tidwell doubled to center and advanced to third on a groundout. Andrews came up and put a bunt down but Tennessee overthrew first base allowing Tidwell to score and Andrews to get all the way to third. The run closed in on Tennessee, 2-1.

The Tigers tied up the game and took the lead in the fifth. Ali Newland reached on a fielder’s choice and Taryn Antoine came in to pinch run. Andrews hit a ball down the left field line to score Antoine to tie the game up 2-2. The Tigers took the lead on the next play as Pleasants hit a ground ball to first to score Andrews, taking a 3-2 lead.

Tennessee led off the bottom of the sixth with a single and the Tigers went to Kilponen again in the circle. She forced a groundout and a strikeout to get the Tigers out of the inning.

The Lady Vols started off the bottom of the seventh with back-to-back hits to give the Vols runners at second and third with no outs. With one out, Tennessee scored one on a groundout to first base, tying the game up 3-3. The Tigers got out of the inning on a pop up to short.

After the Tigers grounded into a double play and flew out to end the frame, Tennessee homered in the eighth to take the win.

On playing in an SEC game…

“It feels good to be playing back in the SEC. It’s been a long time since we’ve got to compete in league play, and it’s really fun to take the field again. We’re really happy to be here in Knoxville.”

The fight in game one…

“I think the whole day was a battle. We had some kids that fought really hard. Taylor Pleasants put a great swing on her home run ball and we got some really good pitching out of both Sunseri and Kilponen.”