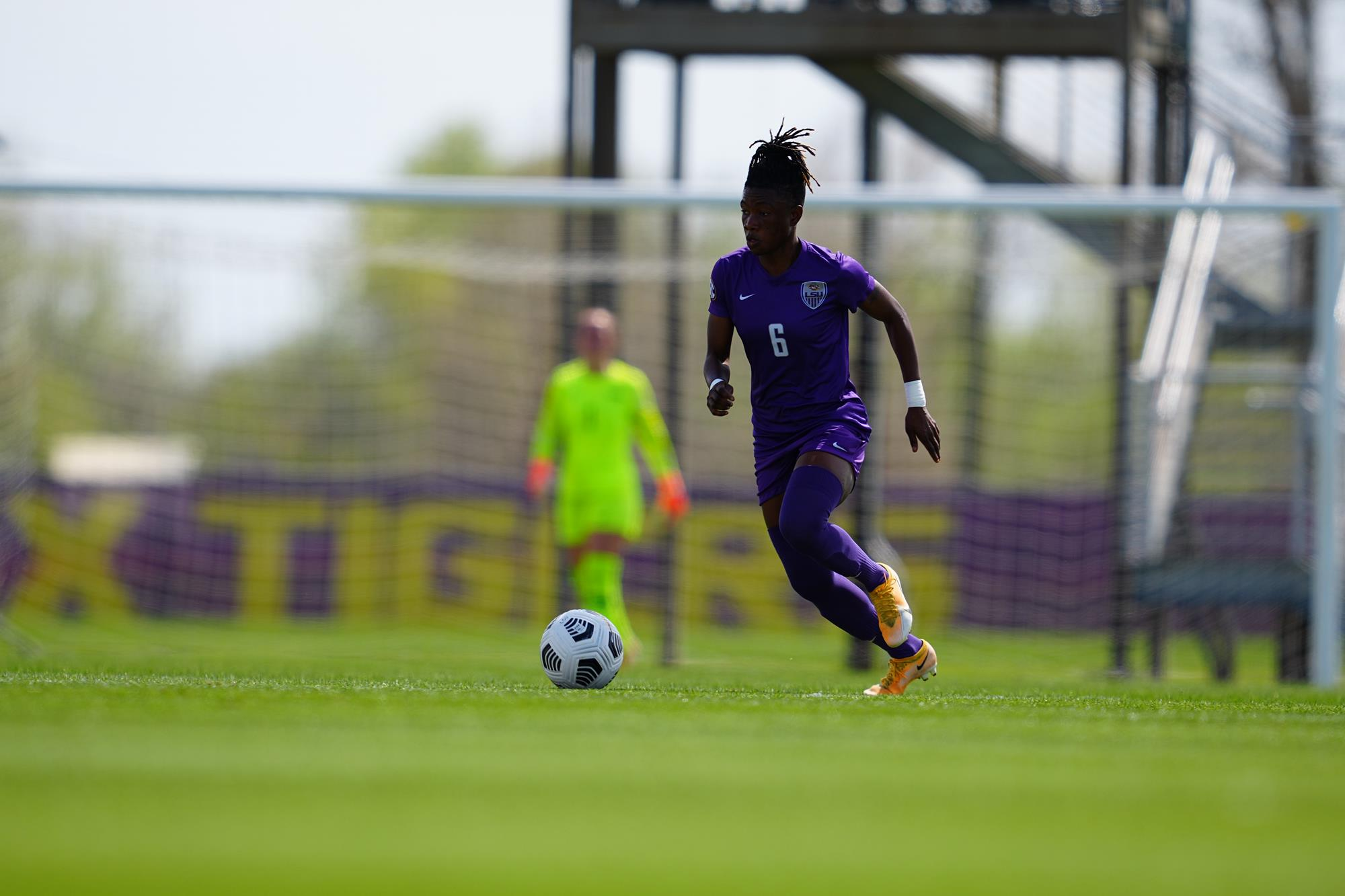 Baton Rouge, La. – The LSU Soccer team fell to the Dallas Baptist Patriots by a score of 2-1 on Friday afternoon at the LSU Soccer Stadium. The Tigers opened the scoring in the 25th minute after redshirt junior Tinaya Alexander’s finesse shot from just outside the box slotted in the bottom left corner. Alexander was sent off in the 39th minute, forcing the Tigers to play a player down for the final 50 minutes of the match. Dallas Baptist equalized in the 61st minute with a tidy finish from Ashley Merrill. The Patriots scored the go ahead in the 82nd minute from the penalty spot with a shot into the bottom right corner by Auee Marit.

With the loss, LSU falls to 5-8-3 on the season while Dallas Baptist improves to 6-0.

The first half was a dominant display from the Tigers, controlling the tempo of the match and creating many chances. The first chance of the afternoon came in the fourth minute when sophomore Maya Gordon sent in a cross from the right flank to junior Molly Thompson, who couldn’t keep her headed attempt on frame.

Dallas Baptist goalkeeper Adrianna Schroeder was tested by multiple Tigers early in the half. She denied shots from Moreau with diving saves in the 10th and 18th minute and stopped a shot from senior Chiara Ritchie-Williams in the 16th minute. Schroeder would make two more saves in the first half, concluding her busy half with five saves.

LSU took a 1-0 lead in the 25th minute thanks to Alexander’s effort. Junior Wasila Diwura-Soale found Alexander with a vertical pass that Alexander took a touch to switch to her left foot, cut inside on her defender and ripped a shot with finesse that found the bottom left corner of the goal. The goal was Alexander’s ninth of the season, and fourth goal in her last three games.

Called her shot and pocketed it in the corner. @tinayaalexande3 now has four goals in her last three games.#GeauxTigers pic.twitter.com/PsWlS0sn0T

Alexander was sent off in the 39th minute following unsporting conduct from a foul, putting the Tigers down to 10 players for the final 50 minutes of the match.

Sophomore Mollee Swift registered two saves in the first half, both in the 34th minute, to finish her time between the sticks with two saves. Freshman Bella Zanotelli subbed in at goalkeeper for the second half for LSU.

The Patriots equalized in the 61st minute after Merrill found herself on the end of a through ball and onsides, beating Zanotelli in a one-on-one with a ground shot to the bottom right corner.

In the 84th minute, Gordon fouled a Dallas Baptist attacker in the box and the referee pointed to the spot for a penalty kick. Auee Marit stepped up and powered the shot into the bottom right corner to beat Zanotelli, who guessed the right way but could not get there.

LSU pressed forward to find an equalizer in the final minutes of the game. Schroeder came up big for the Patriots, denying a one-on-one shot from Thompson with her outstretched leg in the 87th minute before saving the final shot on target from Diwura-Soale seconds later to keep the score at 2-1.

LSU outshot Dallas Baptist by a margin of 17-12, with ten of the Tigers’ shots on goal compared to the Patriots’ six. Schroeder finished the match with nine saves while Swift and Zanotelli both finished with two saves each to bring LSU’s total to four.

LSU will conclude the weekend by playing the Florida Gators in a neutral site game in Orange Beach, Alabama at noon CT on Sunday, March 14.