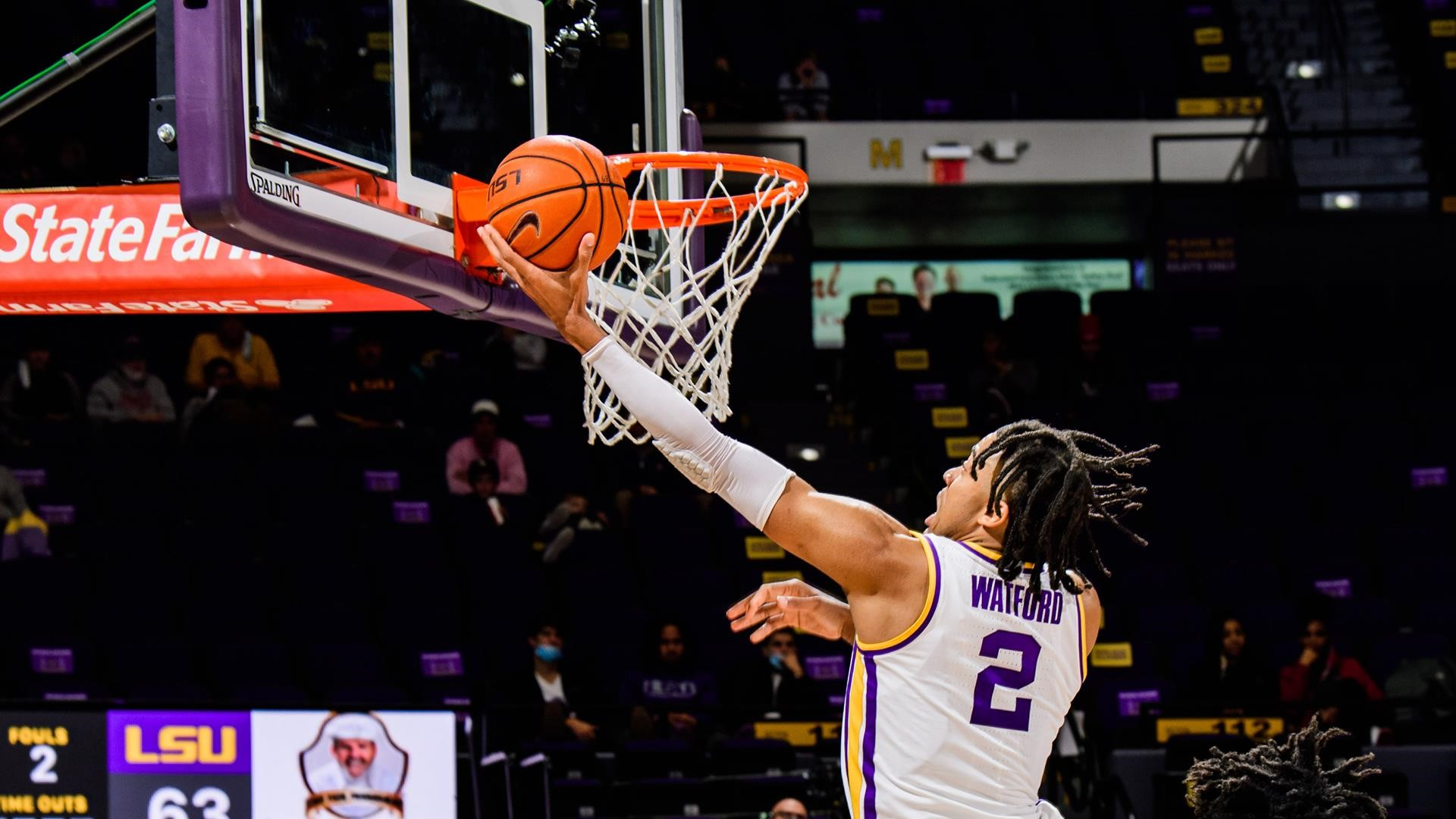 The victory was the 1,600th in LSU men’s basketball history, but more importantly its first in the SEC Tournament since 2016.

Third-seeded LSU (17-8) will face No. 2-seeded Arkansas (22-5) in the SEC Tournament semifinal on Saturday at approximately 2:30 p.m. CT. The game will be broadcast on the LSU Sports Radio Network beginning at 2 p.m., with the telecast slated for ESPN.

Arkansas defeated seventh-seeded Missouri in the SEC quarterfinal on Friday, 70-64. The Tigers and Razorbacks split a pair of regular-season meetings, with the home team winning each game.

Watford, a 6-9 All-SEC sophomore forward, made 11-of-14 shots and grabbed seven rebounds, while Days continued to be a barometer for the Tigers’ success. Days got off to a hot start and finished 8-of-15 shooting with three three-pointers including a shot from the right wing with 58 seconds to play which put LSU up by four points. The forward completed his double double with 12 rebounds.

LSU freshman Cameron Thomas struggled with his shot throughout the game but made two threes and a pair of late free throws that keyed the Tigers’ comeback from a four-point deficit in the game’s final 10 minutes. Thomas scored 18 points, while guard Javonte Smart added 10 points, five rebounds and five assists.

Ole Miss was led by junior guard Jarkel Joiner, who scored 21 of his 26 points in the second half to keep the Rebels in the game. Rebels’ forward Romello White was difficult for LSU to defend in the post, making 7-of-8 shots and all six free throws to score 20 points with 13 rebounds.

With Smart and Thomas struggling from the field in the first half, it was Watford (11 points) and Days (10 points) who led the Tigers to a 29-27 halftime advantage.  Neither team eclipsed 40 percent shooting in the opening 20 minutes.

A 13-2 run midway through the first half gave LSU a 20-13 lead with 9:21 remaining. But the Tigers cooled from the field and committed three turnovers during a five-minute scoring drought that allowed Ole Miss to stay close. Behind Days’ fast start to the second half, LSU extended its advantage to 11, 40-29, less than three minutes into the period. But Joiner and the Rebels answered with a furious rally, making 7-of-8 shots including three three-pointers to earn a 51-46 lead with 11:17 to play. Joiner scored 16 of Ole Miss’ 22 points during the run.

Thomas, who had made 3-of-15 shots to start the contest, made his first three pointer to regain the lead for LSU, 56-55, with 8:42 remaining. The Tigers would not trail again.

His second three pointer came in transition on a pass from Smart less than two minutes later, as LSU extended its advantage to 63-58 at the final media timeout behind 6-of-7 shooting.

Despite 1-of-8 shooting, Ole Miss pulled within one possession, 67-65, at the free throw line as the game crept under two minutes to play. A three pointer by Ole Miss senior guard Devontae Shuler narrowed the Tigers’ advantage to 69-68 with 68 seconds to play. However, following an LSU timeout, Days made his third triple of the evening to put LSU back up four, 72-68, with less than a minute left.

A steal by LSU freshman guard Eric Gaines resulted in a layup by Watford that put the Tigers up six, 74-68, with 28 seconds remaining. After a quick three pointer by Joiner, LSU was able to advance through the Ole Miss press before Thomas was fouled with 12 seconds remaining. The freshman made both free throws to ice the victory.