No. 3 Beach Set For Five Matches in Gulf Shores 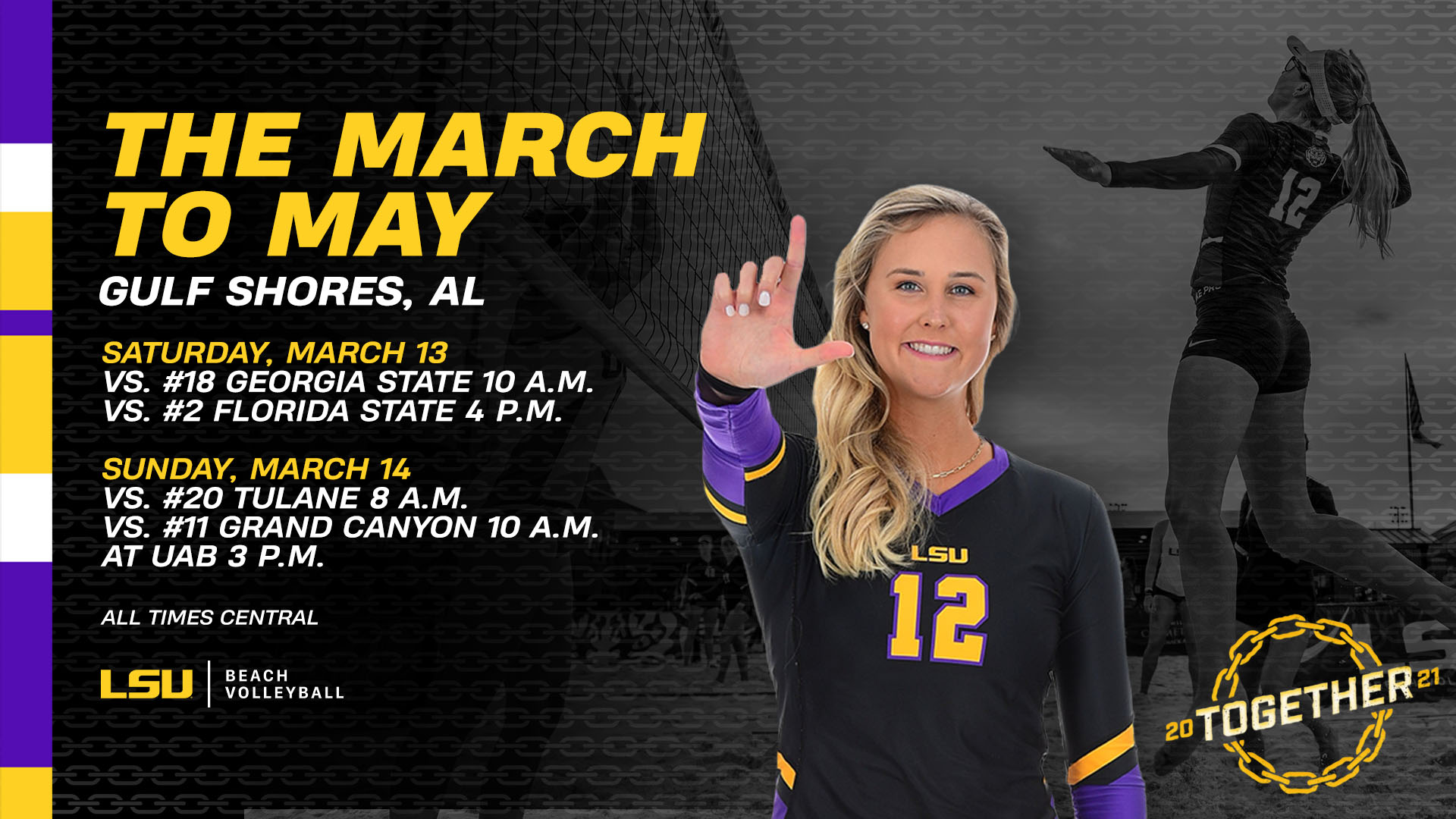 GULF SHORES, Ala. – The No. 3 LSU Beach Volleyball team will compete in the same location of May’s National Championship this weekend for five matches at UAB’s March to May Tournament. The Tigers will play four ranked teams throughout the weekend, including rematches from last weekend against No. 2 Florida State and No. 18 Georgia State.

“We are excited to get back to work this weekend with another big tournament with good competition,” said head coach Russell Brock. “We’ve had a good week of practice. I think this is the time of year where you look forward to getting better, finding ways to improve and facing great competition week in and week out.”

Throughout the years, LSU has played in Gulf Shores numerous times for fall tournaments as well as at the NCAA Championship in 2017, 2018 and 2019. LSU trains in deep sand at its stadium, but the sand in Gulf Shores is shallower which leads to a bouncier and faster paced game. The ocean breeze can also prove to be a challenge on some days at Gulf Place, on the sands just outside of Gulf Shores’ The Hangout.

Both of those rematches will both take place on Saturday, starting with Georgia State at 10 a.m. CT and then Florida State at 4 p.m. LSU hosted both of the Seminoles and Panthers last weekend at the Tiger Beach Challenge.

Florida State handed LSU its first loss ever at LSU Beach Volleyball Stadium which caused LSU to drop from No. 1 to No. 3. Despite the victory over the Tigers, the Seminoles held steady at No. 2 and were leapfrogged by USC as the Trojans took over as the nation’s top team. The Tigers rebounded from that tough loss Saturday night though and went on to sweep Georgia State on Sunday.

“The reality is, we got outplayed,” Brock said of last week’s FSU match. “We’re honest about that. The way we get over that hump is to just get back to work, get back to the grind and really make sure that the things within our control that we didn’t do well enough, that doesn’t happen again.”

Sunday will feature a trio of matches, beginning with No. 20 Tulane at 8 a.m. who is ranked for the first time this season. The Tigers will face No. 11 Grand Canyon before wrapping up the weekend against UAB.