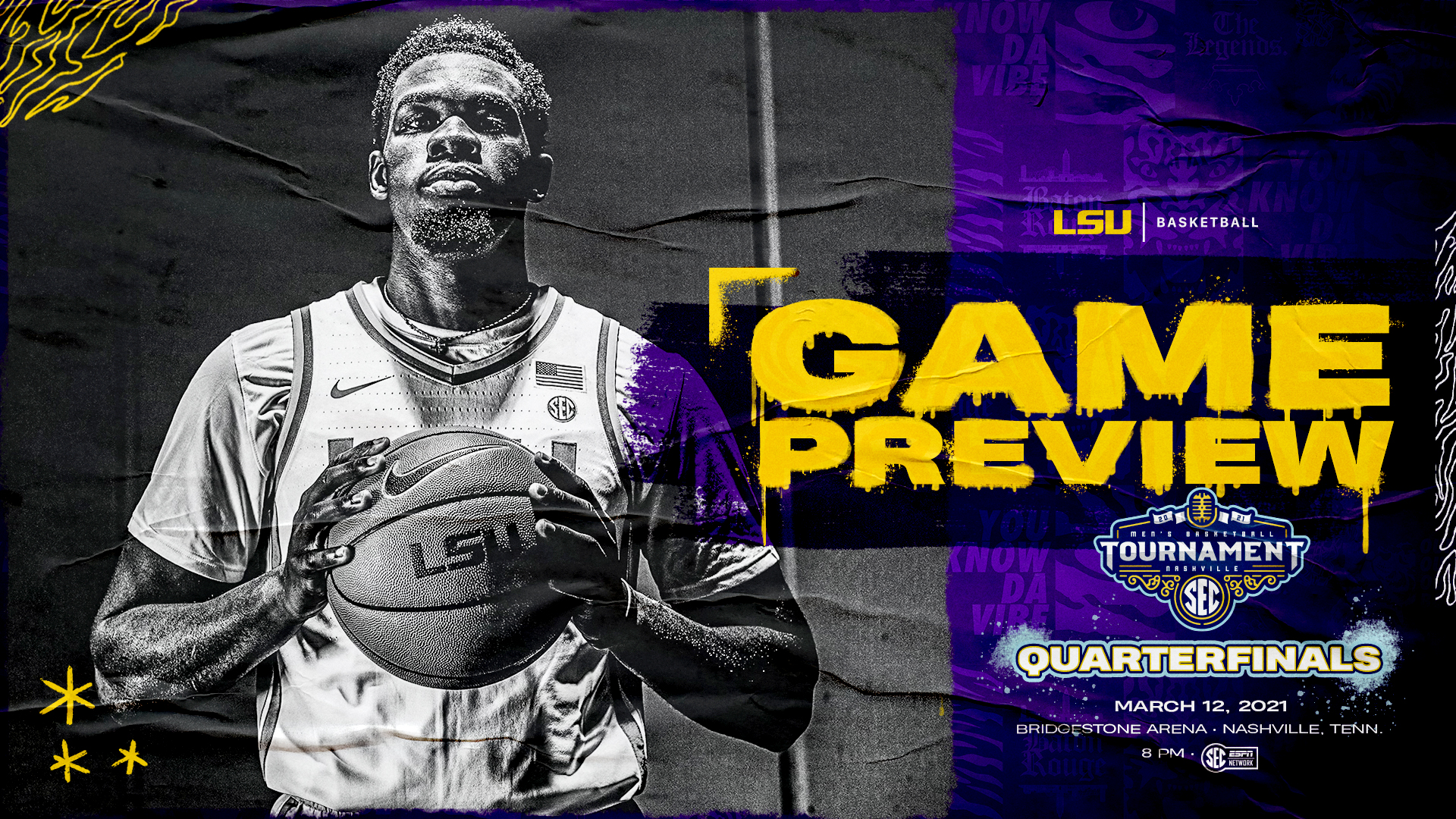 NASHVILLE, Tennessee – The LSU Tigers will open their attempt to make a statement in the 2021 Southeastern Conference Tournament when they play the final game on Quarterfinal Friday at the Bridgestone Arena.

The tournament game between the Tigers and Ole Miss, a 76-59 winner over South Carolina Thursday night, will follow 25 minutes after the 6 p.m. quarterfinal game at approximately 8:15 p.m. CT.

The game will be broadcast on the affiliates of the LSU Sports Radio Network (Guaranty Media flagship in Baton Rouge, Eagle 98.1 FM) with the “Voice” of the Tigers, Chris Blair, and former head coach John Brady on the call remotely from Baton Rouge and televised on the SEC Network with Tom Hart, Dane Bradshaw and Marty Smith.

LSU is 16-8 and 11-6, earning the third seed in the tournament. LSU is the only team in the league to earn a double bye in the last three tournaments (2019, 2020 and 2021). The Tigers have won 39 SEC regular season games over the same three seasons, the most by any team over that span in the league.

Ole Miss, 16-8 overall after a 10-8 SEC record, is the six seed in the league with the Rebels listed in the first four out for the NCAA Tournament entering Thursday night’s play. LSU has a win over Ole Miss with the Tigers defeating the Rebels, 75-61, in early January at Oxford. .

LSU comes into the tournament off two victories, at home against Vanderbilt, 83-68, and a good 86-80 performance on the road at Missouri. In that game, LSU scored the final six points to get the victory.

Darius Days comes in at 11.7 points and 7.5 rebounds and Aundre Hyatt rounds out the starters at 4.1 points and 2.8 rebounds.

“We’re excited about getting going here. We’re excited to get started in the tournament,” Coach Will Wade said when he visited with the media on Wednesday. “I’ve talked to our guys about how we’ve done a lot of good things in the last three years, the last four years really, but particularly the last three years, but one of our biggest issues is that we haven’t been very good in this tournament. We haven’t been very good historically and we haven’t been very good since we’ve been here. This is the last frontier for us within the SEC. We want to perform well and play well in this tournament. We certainly want to improve our seeding and improve our standing for the NCAA Tournament as much as we can.”

As Coach Wade has pointed out, the SEC Tournament has not been a scene of success in the past years for LSU with just a 26-40 record since the renewal. LSU’s last win in the event was in 2016 in the quarterfinals. The Tigers last made the championship game in 1993 and has just one win in the tournament in 1980.

On Thursday, the Tigers went to Bridgestone Arena for an early morning 30-minute shooting session which allowed the players to get a feel of the setup in the building for the tournament. The Tigers were scheduled to late in the afternoon practice for an hour at Memorial Gymnasium on the Vanderbilt campus.

Friday LSU will have a walkthrough at Vanderbilt to go over the scouting report once the opponent is known in preparation for the late start.

An LSU win on Friday, would put the Tigers into the semifinals at approximately 2:30 p.m. on Saturday.