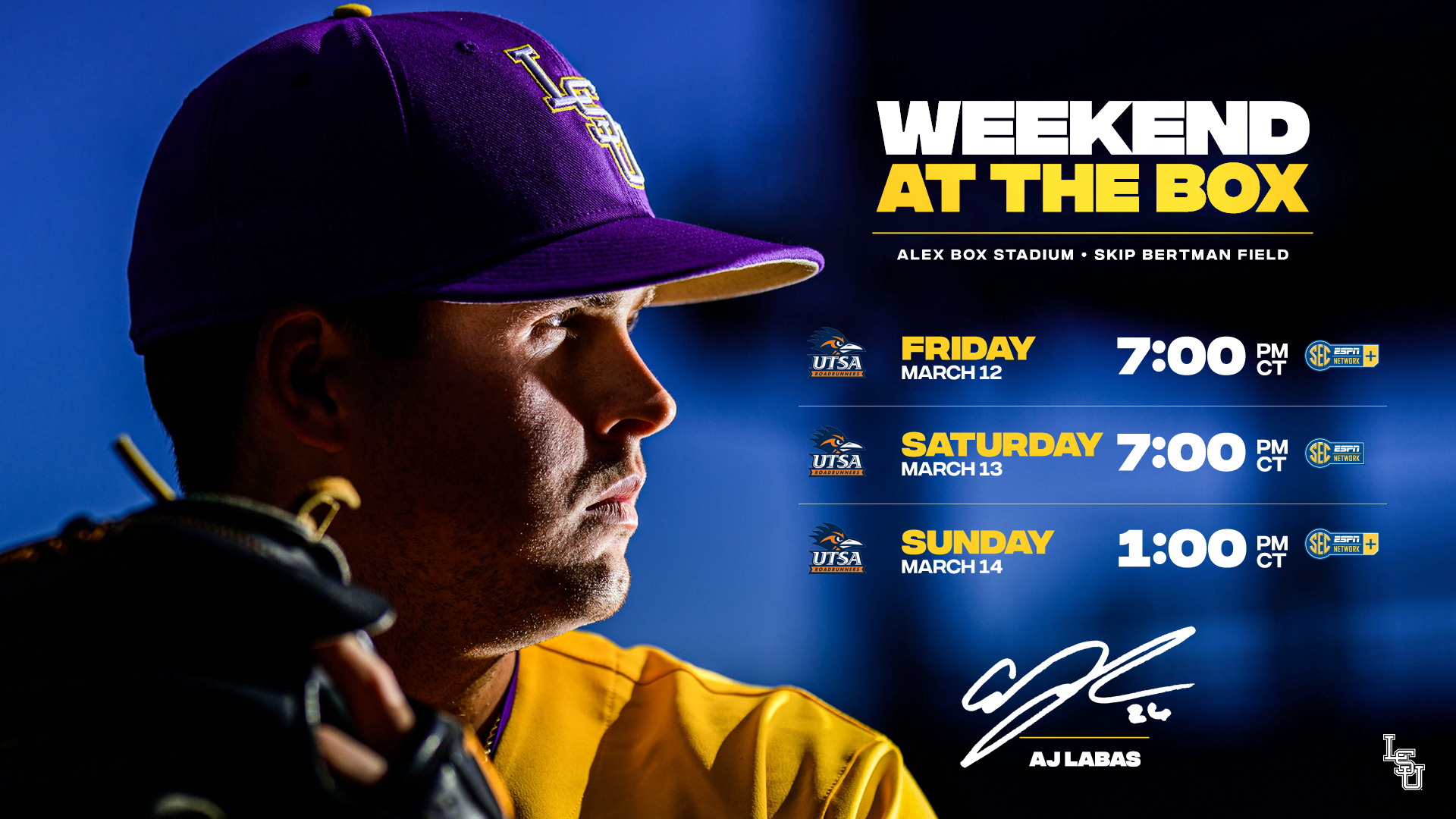 TV/ONLINE
• Saturday’s game will be televised on the SEC Network
• All three games may be viewed on SEC Network +, accessible at Watch ESPN.com and the Watch ESPN app

SERIES RECORD VS. UT SAN ANTONIO
Friday’s game marks the first meeting between LSU and UTSA … the Roadrunners are a member of Conference USA and were picked to finish fifth by the league’s coaches in the six-team C-USA Western Division … Southern Miss is the C-USA West favorite, and Florida Atlantic is the coaches’ pick to win the C-USA Eastern Division … LSU defeated Louisiana Tech – which is picked to finish second in the C-USA West – earlier this season, a 16-7 victory on February 22 in Baton Rouge.

QUOTING PAUL MAINIERI
“UTSA is going to be a very challenging team; we’ve been watching video of them, they’re very physical, and they’ve hit good pitching this season. They’ve been scoring in double-digits and hitting over a home run per game, so it’s going to be a challenging offensive team for us to face. I feel like they’re the perfect opponent for us to go against leading into SEC play. They’ve got good arms on the mound, and we’re going to be facing 90 mph plus velocity with their pitching, so we’ll have to play well in every facet of the game to have success this weekend.”

ABOUT THE TIGERS
• No. 15 LSU won its two midweek contests, defeating Texas Southern, 10-4, on Tuesday and blanking New Orleans, 5-0, on Wednesday.
• Right-hander Will Hellmers fired five shutout innings Wednesday night, and first baseman Tre’ Morgan and designated hitter Cade Beloso combined for four RBI to lead LSU to the win over New Orleans. Hellmers allowed just four hits with one walk and a career-best seven strikeouts. He fired 73 pitches in the outing, also a career high for the true freshman. Morgan was 2-for-4 at the plate with a triple, two RBI and two runs, and Beloso was 2-for-3 with a double and two RBI.
• First baseman Tre’ Morgan and third baseman Cade Doughty combined for seven RBI, and right-hander Ma’Khail Hilliard fired 3.1 perfect relief innings Tuesday night to lead the Tigers to the win over Texas Southern. Hilliard entered Tuesday’s game in the third inning and recorded 10 straight outs, including five strikeouts. Thirty-four of Hilliard’s 40 total pitches were strikes.
• First baseman Tre’ Morgan has tripled in three straight games, becoming the first LSU player to accomplish the feat since Trey Watkins tripled in three consecutive contests in 2010 … Morgan enters Friday’s game versus UTSA riding an 11-game hit streak … Morgan is batting .526 (10-for-19) in LSU’s last five games with two doubles, three triples, nine RBI, eight runs and two stolen bases.
• Shortstop Jordan Thompson is hitting .389 (7-for-18) in LSU’s last five games with two RBI and three runs scored … designated hitter Cade Beloso has six RBI in the past five games, and leftfielder Gavin Dugas has five RBI in the five-game span.
• Junior right-hander Landon Marceaux fired six shutout innings to defeat Oral Roberts last Saturday … Marceaux allowed six hits with no walks and seven strikeouts while throwing 84 pitches, 63 for strikes … only one ORU hitter advanced beyond second base against Marceaux, who has not allowed an earned run this season in 17 innings with no walks, 21 strikeouts and a .167 opponent batting average.
• Junior right-hander AJ Labas turned in a quality start last Sunday versus Oral Roberts, blanking the Golden Eagles through six innings while scattering five hits and recording no walks and seven strikeouts.

ABOUT THE ROADRUNNERS
• UTSA opened its season the weekend of Feb. 26-28 and won two of three games at Sam Houston State … the Roadrunners also won three of four games in a weekend series versus UT Arlington, and in its most recent contest, UTSA dropped a 6-3 decision on Wednesday against ninth-ranked TCU.
• The Roadrunners are hitting .320 as a team in eight games this season with 10 home runs … infielder Joshua Lamb is batting .400 with six doubles, one homer and nine RBI, and infielder Griffin Paxton is hitting .367 with two doubles, one homer and nine RBI … catcher Nick Thornquist and outfielder Ian Bailey have two homers each for UTSA.
• The UTSA pitching staff has a 2.74 ERA and 72 strikeouts in 69 innings … opponents are batting .230 against the Roadrunners pitchers.