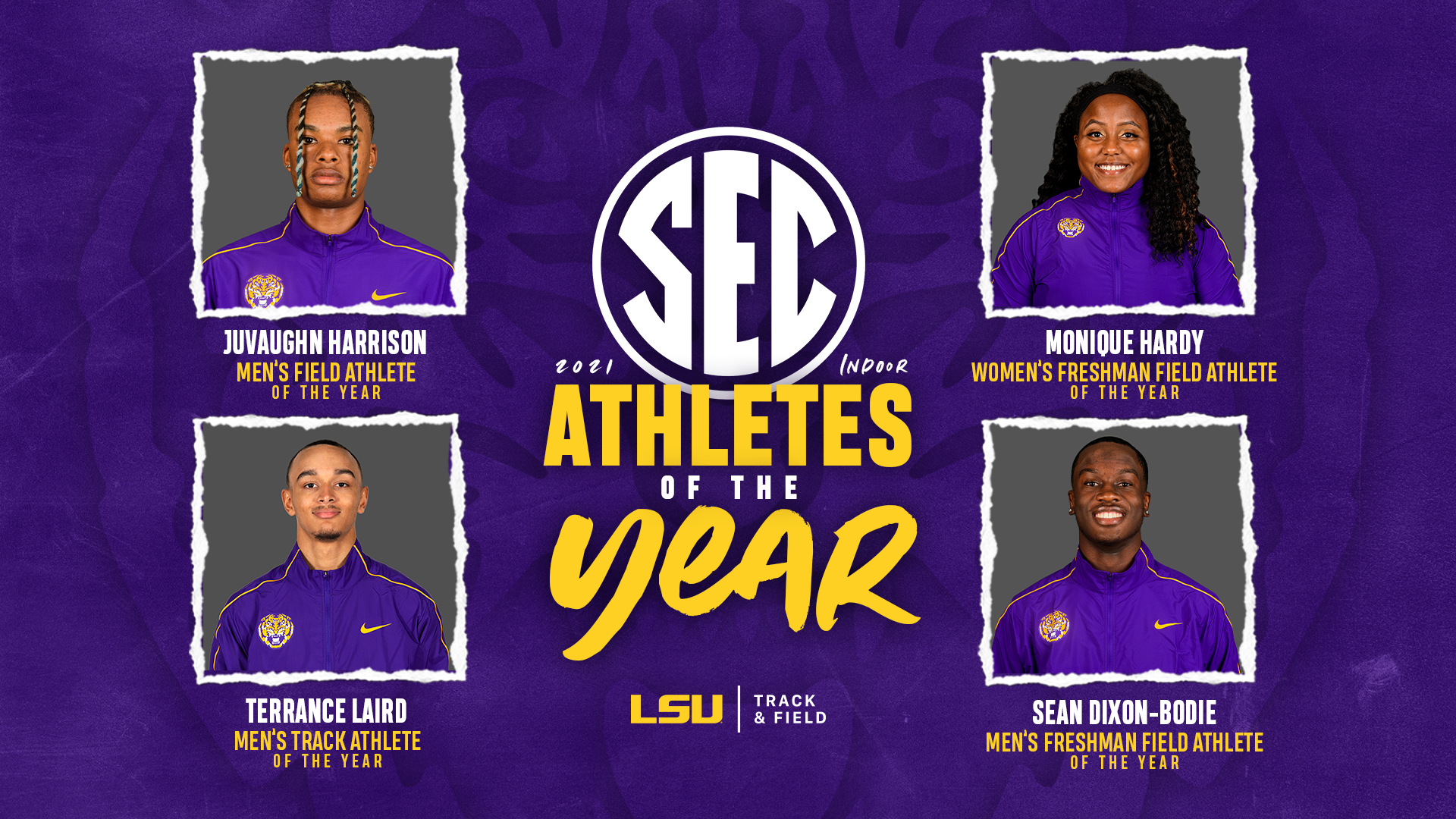 Baton Rouge, La. – Four members of the LSU track and field team – JuVaughn Harrison, Terrance Laird, Monique Hardy, Sean Dixon-Bodie – were honored by the Southeastern Conference coaches with end of the year awards for the indoor track and field season.

2021 SEC Indoor Athletes of the Year

Harrison becomes the fourth man in program history to win this award as he joins John Moffitt (2004), Walter Henning (2010), and Mondo Duplantis (2019). Harrison became just the third athlete in SEC indoor history to sweep conference titles in the high jump and long jump at the same meet. He set an SEC meet record with a long jump of 27′ 4″ (8.33 meters) in the process and it made him the fifth-best performer in collegiate history. Harrison was awarded the Cliff Harper Trophy as the high-point scorer of the meet with 20 total points thanks to his two event titles. Harrison will compete in the long jump and high jump this week at the NCAA Championships on Friday; he owns the NCAA lead in both events.

Laird has been on an absolute tear in 2021 as he is undefeated in 200 meter dash finals with a record of 3-0. He set a meet record of 20.28 to win the SEC title in the 200 meters two weeks ago; it’s a 2021 world lead it also made him the 10th fastest performer in collegiate history. Laird will enter the NCAA meet with the No. 1 seed time in the 200 meters. Laird is the third LSU athlete to win this award alongside Xavier Carter (2006) and John Kosgei (2008).

Hardy becomes only the second woman in program history to garner the freshman field athlete of the year award for the indoor season; Rachel Laurent first won it in 2009. Hardy took fourth at the SEC Championships in the weight throw en route to being named to the All-SEC Freshman Team. Her season best mark of 71′ 11.50″ (21.93 meters) ranks No. 9 on the NCAA list this year and is the top mark by a freshman; it’s also the second best throw in LSU history. Hardy will compete in the weight throw at the NCAA Championships on Thursday.

Dixon-Bodie earned his award after earning bronze in the triple jump at the SEC Championships with a personal best mark of 53′ 11.75″ (16.45 meters). He ranks fifth nationally in the event and will compete on Saturday at the NCAA Championships; his PR of 53′ 11.75″ makes him the top freshman in the nation currently and it’s the ninth best jump in LSU history.

The NCAA Championships will take place this Thursday through Saturday (March 11-13) at the Randal Tyson Track Center in Fayetteville, Arkansas.