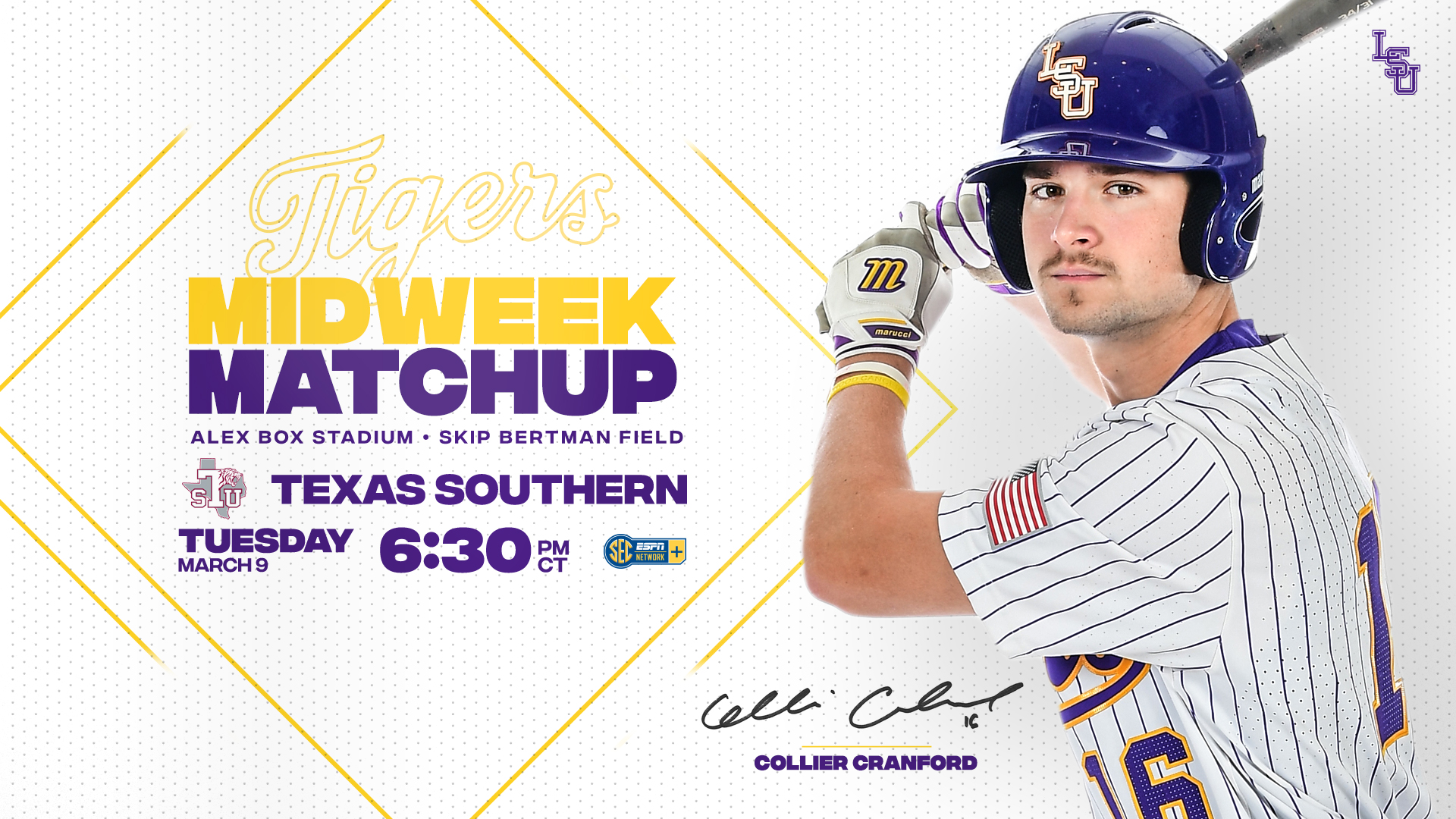 SERIES RECORD VS. TEXAS SOUTHERN
LSU leads the all-time series with Texas Southern, 4-0, with the first meeting occurring at the 2008 NCAA Baton Rouge Regional in the original Alex Box Stadium. The subsequent three meetings were also in Baton Rouge; the most recent matchup was on March 13, 2019, a 16-5 LSU victory in Alex Box Stadium, Skip Bertman Field.

QUOTING PAUL MAINIERI
“Certainly there are a lot of things we need to do to get back on track. We’re only 12 games into the season, and you learn a lot about your team as the season wears on. I’m certainly learning a lot about our team, and there will definitely be some changes. One of those changes will be to get (second baseman) Cade Doughty back in the lineup (after a shoulder injury). I feel strongly that he is not only one of the best players on our team, but in our league. Having Cade back gives us a much better balance in our lineup; we’re hopeful that he can play on Tuesday night, and once he gets back in there, it’s going to make a big difference for us.”

ABOUT LSU
• Junior right-hander Landon Marceaux fired six shutout innings to defeat Oral Roberts on Saturday … Marceaux allowed six hits with no walks and seven strikeouts while throwing 84 pitches, 63 for strikes … only one ORU hitter advanced beyond second base against Marceaux, who has not allowed an earned run this season in 17 innings with no walks, 21 strikeouts and a .167 opponent batting average.
• Junior right-hander AJ Labas turned in a quality start on Sunday versus Oral Roberts, blanking the Golden Eagles through six innings while scattering five hits and recording no walks and seven strikeouts.
• Junior leftfielder Gavin Dugas led the Tigers at the plate last week, batting .467 (7-for-15) in five games with two doubles, six RBI and three runs … sophomore infielder Zach Arnold batted .389 (7-for-18) on the week with one double, one homer and four RBI, and freshman first baseman Tre’ Morgan hit .375 (6-for-16) with two doubles, one triple, one homer, five RBI and two runs.
• Freshman rightfielder Dylan Crews homered twice, was 3-for-3 in stolen base attempts and recorded two outfield assists, twice throwing a runner out at third base … freshman third baseman Jordan Thompson contributed a homer and five RBI in five games this week.
• The Tigers featured four true freshmen in their starting batting order throughout the week – Dylan Crews, Tre’ Morgan, Jordan Thompson and outfielder Brody Drost – and seven true freshmen pitchers saw action on the mound in last week’s games.
• Freshman right-hander Blake Money posted two excellent relief efforts during the week, working 4.2 shutout innings and allowing just two hits with no walks and five strikeouts … freshman right-hander Ty Floyd fired three scoreless innings in two relief appearances, allowing one hit with one walk and six strikeouts … freshman right-hander Michael Fowler recorded four scoreless innings against Oral Roberts on Friday, allowing only one hit while posting no walks and two strikeouts.
• LSU recorded its second walk-off win of the season on Wednesday when first baseman Tre’ Morgan delivered a ninth-inning sacrifice fly to score in the deciding run in a 5-4 victory over Nicholls … LSU’s first walk-off win came on February 27 versus Youngstown State on a two-run homer by second baseman Cade Doughty.

ABOUT TEXAS SOUTHERN
• Texas Southern posted a three-game sweep of Prairie View over the weekend after beginning its season with nine straight losses.
• TSU was swept in weekend series by Houston and by Incarnate Word, and the Tigers suffered midweek losses to TCU and to Texas Tech (twice).
• TSU was predicted to finish second behind Grambling in the SWAC Western Division standings in the league’s 2021 preseason rankings. Third baseman Nic Garza and outfielder Tyson Thompson earned first-team preseason All-SWAC recognition.